Reducing Women’s Imprisonment in the UK

In collaboration with the Prison Reform Trust, Soroptimists in the UK have obtained data for a report to Government on alternatives to prison for women offenders.

There was a launch for England in the Churchill Dining Room of The House of Commons in London on 25th March 2013 attended by Jenny King from Swindon (on the right in photo) and three other Soroptimists from Clubs in our Region. 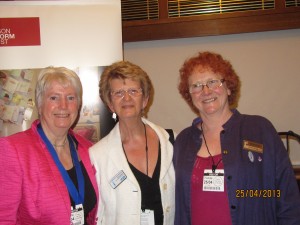 Jenny also attended Bristol Club’s Conference”Reducing Women’s Imprisonment” on September 9th.  She was impressed to learn about the work of Eden House a Women’s Centre in Bristol.

A visit was made to Isis Womens Centre in Gloucester, when it was hoped another similar Centre would be opened in Swindon. S I Swindon were delighted when this happened and hope to be able to work with the Centre once it is fully established

S I Swindon made a full report of local findings to Region and all Regions’ reports were passed on to the Prison Reform Trust who have now (2015) presented a  professional report to the government using the information and statistics obtained by all the clubs in Great Britain.

Club Home
Club news
About our Club
FAQs and Information
Friendship Links with other Clubs
History of the Swindon and District Soroptimist Club
Privacy Notice for Members
A message from President Valerie
Events Around the Region
Club Projects and Fundraisin
Bookmark Project "Loves Me ...Loves Me Not" re Good and Abusive Relationships
International Women's Day March 8th Every Year
Our Project action and fundraising for charities Club Year to April 2018
Programme Action and Charity Fundraising Club Year 2013/14, 2012/13 and 2011/12
Micro Loans to Women Entrepreneurs in the Third World
Why would I want to be a Soroptimist?
Contact us