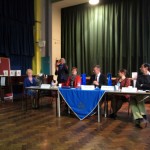 Are we doing enough to safeguard our children?  This was the question that was posed by SI Tenby and District and Greenhill’s Sixth form to Simon Hart MP, Police Commissioner Christopher Salmon,  Barnardo’s Cymru Emma James and ANM Joyce Watson at Ysgol Greenhil School last Friday evening; coincidentally International Anti-Slavery Day. For the last 58 years, Soroptimists in Tenby have successfully supported many local, national and international campaigns and charities and are still very active on all of these fronts. However, amongst other important issues, over the last decade Soroptimist International has shown great concern over the global issue of modern day slavery and people trafficking

Despite the inclement weather, a large audience was in attendance, thanks  to the excellent publicity the Forum had received from the Tenby Observer, due largely  to the generous sponsorship from Graham Evans, of G.H. Evans and Company Shillingford Park, and Brian and Pam Maggs, of the Southcliff Hotel Tenby.  The club is also grateful to Pembrokeshire Radio for helping to publicise the event. The audience included representatives from across the community, including Tenby Town Council, Pembrokeshire County Council, the Salvation Army, St Mary’s Church, St John’s Church, The Women’s Institute, the Guides, Tenby Rotary Club, Tenby Playgroup, Manorbier School, the NSPCC, Inner Wheel and Greenhill students from Year 12 and 13.  Also in attendance were fellow Soroptimists from SI Cardiff, SI Carmarthen, SI Milford and SI Brecon.

Mrs Jan Kingston opened the proceedings, giving a warm welcome to everyone and expressing her own concerns about human trafficking and internet grooming.  SI Tenby’s President Elanor Sanderson then welcomed Programme Action Officer Dr. Anne Kelly to the lectern.  Dr Kelly gave a very detailed overview of the Club’s ongoing campaign to raise awareness of this most disturbing crime. 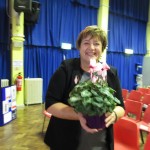 A particular stimulus for Tenby’s involvement was the discovery of a Trafficking crime taking place under our very noses at Castlemartin, which involved the arrest of two people, who were trafficking eight African girls brought into Pembrokeshire via Ireland. Thankfully, the perpetrators were dealt with in a very appropriate manner, but the Dr Kelly warned the audience that there is no room for complacency. Since this time the club has undertaken many projects to raise awareness of the issue, to help agencies undertaking support of victims and to aid detection. Dr Kelly then handed over to Greenhill’s Head Boy, Lewis Brickle, and Head Girl, Angharad Lear to introduce the speakers and chair the Forum.

First to speak was MP Mr. Simon Hart who has been actively campaigning at Westminster on these issues.  Partly as a result of this group’s efforts an Inter-Departmental Ministerial Group has been set up to investigate instances of modern day slavery and trafficking.  There has also been an announcement from Theresa May of plans to strengthen legislation. Simon Hart gave a very thorough insight into the work being done at Westminster to combat human trafficking and expressed his own deep disquiet about the problem.

Christopher Salmon then explained the various strategies employed by Dyfed Powys Police to bring these criminals to justice. A multi agency anti- trafficking group is soon to be set up in Dyfed Powys, but the Police Commissioner’s message was plain: it is the general public who are the key players in exposing criminal activity and their vigilance is of vital importance in exposing trafficking networks or incidents of Modern-day slavery.

Finally Emma James gave a powerful, often harrowing, account of the work carried out by Barnardo’s to confront Child sexual exploitation, an illegal activity by people who have power over young people and use it to sexually abuse them. This can involve a broad range of exploitative activity, from seemingly ‘consensual’ relationships and informal exchanges of sex for attention, accommodation, gifts or cigarettes, through to very serious organised crime. It is a hidden issue, but last year alone Barnardo’s services worked with 1,452 children and young people who had been sexually exploited.  However, Emma’s account was not all ‘doom and gloom’. She recounted several case studies which clearly showed how Barnardo’s work had transformed the lives of sexually exploited children and young people across the UK.  She and her fellow project workers actively seek out young people, offering them the long-term support they need if they want to change their way of life. The services also work with schools and other agencies to educate vulnerable young people to protect them from exploitation and with the police to bring about the prosecution of perpetrators of sexual exploitation.

Lewis Brickle and Angharad Lear then welcomed AM Joyce Watson to the table so that she could formally contribute to the plenary discussion. In 2008, it was Mrs. Joyce Watson AM who facilitated SI Tenby’s first Anti-Slavery competition. Her campaign to fight this shocking crime resulted in the appointment of an Anti- trafficking Coordinator for Wales. Members of the audience and Greenhill students then took an active part in the debate, asking some very pertinent questions about the ways in which human trafficking could be exposed and deterred.  The four guests gave thoughtful and illuminating answers but left the audience in no doubt that there was still a great deal of work to be done.  Despite the efforts that have been exerted by all involved our country and agencies are struggling hard to deal with these issues. The message is clear: raising the public’s awareness of human trafficking, modern-day slavery and internet grooming is the most important way to expose the perpetrators of these heinous crimes.

SI Tenby and District extend their thanks to all who participated in the Forum; especially the three headline speakers, Simon Hart MP, Christopher Salmon and Emma James, as well as Joyce Watson AM, Dr. Anne Kelly, Head Teacher Mrs Jan Kingston, Lewis Brickle, Angharad Lear and their fellow Sixth Formers, the Friends of Greenhill for all their help and, of course, the audience for their interest and support. All proceeds from the raffle went to Barnardo’s. Please visit our website at http://sigbi.tenby.org  for more information about our work.