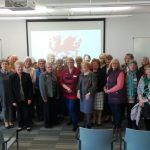 DCI Ross Evans managed the event and was joined by Steve Chapman, Coordinator for Modern Slavery and Human Trafficking at the Welsh Government, Cardiff, and Michael Smith Regional Community Cohesion Coordinator.  Unfortunately, the fourth speaker of the day, Angelina Rodriques of BAWSO,Cardiff, was involved in a  traffic incident on the M4 motorway and was unable to attend.

The day commenced with a welcome from DCI Evans, who also gave an outline of his role within the Powys Police Force.  The aim of Dyfed Powys Police was to raise awareness of the crime of Modern Slavery.  There had been six reported cases within the area over the last year, but, following a recent awareness training session for statutory and voluntary organisation representatives, held a month ago in Cardiff, the number of suspected cases reported had doubled.  It is hoped that another such training session can be held within the local area during the summer months. Because of the geography of Dyfed Powys there is concern over the possibility of this crime occurring in both coastal and inland areas.  Port authorities and, more recently, Farming Unions have been invited to join the Dyfed Powys Police Forum on Modern Slavery in their fight to stamp out the crime. It was also noted that membership of this forum is soon to be extended to Pembrokeshire Hoteliers.

The next speaker was Steve Chapman from Welsh Government He spoke of his previous career as a Police Commander, in the North of England, and his crime detection work with the Metropolitan police during the London Olympics, following which, he was appointed to his current post as the first appointed coordinator of Human Trafficking and Modern Slavery in the country. Steve gave an account of the progress on detection of these crimes within the Newport, Cardiff, Swansea Bay and Dyfed Powys areas of South West Wales. He recounted the harrowing experiences of the victims of such crimes detected in Wales and affirmed his commitment to their elimination, and the pressure being exerted by Government too, to wipe out the crimes. In this respect of this, the introduction of The Modern Slavery Bill 2015 has been a great help in ensuring that all agencies are on board to fight the crime.

Michael Smith then gave a very interesting talk on all of the aspects of his very broad role, which includes the coordination of Modern Slavery Awareness Training, for all statutory and voluntary agencies; the monitoring of tension with local communities and the detection of Hate Crime and Extremism. Another important aspect of his work is to oversee those Syrian Refugees accepted by Welsh Government for settlement within the Dyfed Powys area of Wales. He explained that each refugee family or individual will be provided with a case worker service, to help with their orientation, settlement and ongoing support.

All three speakers emphasised the important part the voluntary organisations, such as Tenby Soroptimists, have already played in helping to stamp out these crimes and the role the general public can play in recognising the signs of modern slavery and being prepared to report their suspicions to the police. Anyone observing even the slightest thing that might make them suspicious should report their concerns to the police on 101, 999 numbers or, to Crimestoppers 0800 555 111. Any report will be treated with the utmost confidentiality.

A vote of thanks for the very informative nature of the Conference and its organisation was given by WI Carmarthen.  In particular, thanks were extended to CDI Ross Evans and his staff for hosting the event and the provision of refreshments and a buffet lunch.