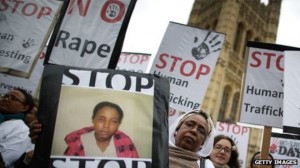 Soroptimist International of The Fylde has actively campaigned and lobbied on humanitarian issues for many years, often beavering away behind the scenes, raising awareness and supporting projects many people think are nothing to do with us.

To mark ANTI-SLAVERY DAY  on October 18, Fylde Soroptimists would like to put the record straight: That in our peaceful and peaceable Fylde area, slavery touches all of us, even if we don’t realize it!

Modern day slavery is a terrible crime across the world and four people are trafficked into slavery every single minute. Worldwide one in five women are the victims of rape and these are not statistics from ‘other countries’ but right on our own doorstep.

A national newspaper has highlighted the extent of trafficking in East Lancashire and being at the end of the M65 – M55 corridor, Blackpool has had its share of unsettling stories of grooming, underage sex, prostitution.

Victims are recruited, tricked or coerced into hard labour or the sex industry, often isolated by language and cut off from family and everything familiar. According to police, trafficking is not confined to big cities but in communities just like ours. Think of domestic operatives, food workers, people expecting a good wage for hard work and then vanishing behind the scenes in a transient seaside population. Trafficking doesn’t mean just sex and drugs, it means exploitation of vulnerable people in many ways and illegal movement of human victims right under our noses.

Groups such as Soroptimist International have awareness-raising campaigns, seminars and petitions on the go all the time. Lorry stickers are spreading the message, taxi drivers are receiving information, public lavatories display helpline contact details and there are initiatives to stop sex advertising.

If you do one thing to mark anti-slavery day, you could sit quietly at home and google ‘Purple Teardrop Campaign’, an eye-opening website to convince all of us that slavery is all around us.

And what are Fylde Soroptimists doing to mark the day? Their work with women and girls in our area is well known and Anti-Slavery Day falls in the week that their grant scheme was launched under the banner ‘Speak Up for Women’. Publicity and awareness-raising around the subject of 21st century slavery is imperative. I hope that this short profile has convinced readers that, sadly, slavery is far from obsolete and is very much to do with every one of us.

Club Home
Club news
About our Club
MEET THE TEAM!
OUR MEETINGS
NEXT MEETING DATE
DATES FOR YOUR DIARY – REGIONAL AND OTHER EVENTS
MESSAGE FROM FYLDE SOROPTIMISTS
WHAT'S ON IN 2019/20
NEWS FOR MEMBERS
Annual General Meetings – April 2019
REGION AND FEDERATION
FEDERATION EVENTS
WHAT WE DO
FRIENDSHIP
RAISING AWARENESS
PROJECT WORK
TOILET TWINNING - "80 FOR 80" 2018
CHARTERING OF AKS YOUNG SOROPTIMISTS' CLUB 2018
Contact Us