What is Digital Abuse?

Digital Abuse is a growing issue among teens. It is defined as a form of violence using technologies in texting and social networking. It is a means of harassment, bullying or intimidating. Digital dating Abuse is all the above, plus stalking a partner often in the form of verbal or emotional abuse conducted online.

Digital Abuse is all about power and control, demanding to know passwords, excessive texting, demanding the partner to engage in sex texting, using various forms of technology to control and monitor. Many victims do not realise that what they are experiencing is abuse but think that it is an indication of love. Many times, it gets escalated to more serious forms, like demanding to know where they are, limit interaction with friends and family and stalking online. Breaking free of the abuse will become more of a challenge. SI Malta distributed pamphlets regarding this subject amongst women and girls in places such as echo markets, women’s shelter, and abused women in intimidating situations.

To empower the young generation and help create a safer environment, action must be taken. According to a study from the Urban Institute Project, whose mission is to open minds, shape decisions, and offer solutions through economics and social policy says that 25% of dating teens have been victimised by their partner through technology. More than half said they were also physically abused.

In our Country 71 actions were taken to control cyber abuse, one of which is addressed in empowering the young through a safer Internet.

Digital Citizenship will become part of the National Education Curriculum, to equip students and youths with the necessary abilities to interact and use the Internet safely and intelligently. Parents and carers will be involved together with Educators and Youth workers. This action will stimulate the production of creative online content, empower the younger generation and help create a safer environment. With the support of competent authorities this measure will help combat cyber child abuse and exploitation. 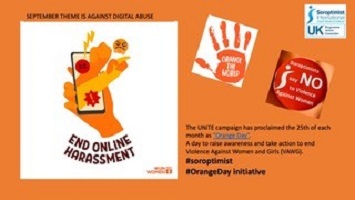