UKPAC is sending 100 trauma bears to England, Scotland, Wales and Northern Ireland. Each bear is hoping to find more bear friends in his/her quest to find a deserving home.

On receipt of your UKPAC bear(s), appeal for knitters or crocheters in your area to knit bears (see Templates below)

Trauma bears are excellent in the back of Police cars for victims of trauma, so your local Constabulary or Police and Crime Commissioner may welcome bears and/or local women’s refuge and/or children’s centre. Source and list these locations as homes for the bears. Deliver, record, publicise, complete Programme Report Form, let UKPAC know about your programme action.

The bears are meant to be a ripple or snowball effect to aid communication, ascertain locate need, provide useful activity at this COVID time, create good work in the local community, and aid local publicity. Don’t forget to send images and information back to UKPAC and this will be displayed on UKPAC website. Web: sigbi.org/ukpac Facebook/Twitter @UKPAC Email: ukpaccomms@gmail.com

COVID notes: bears can be quarantined for 72 hours before transactions. 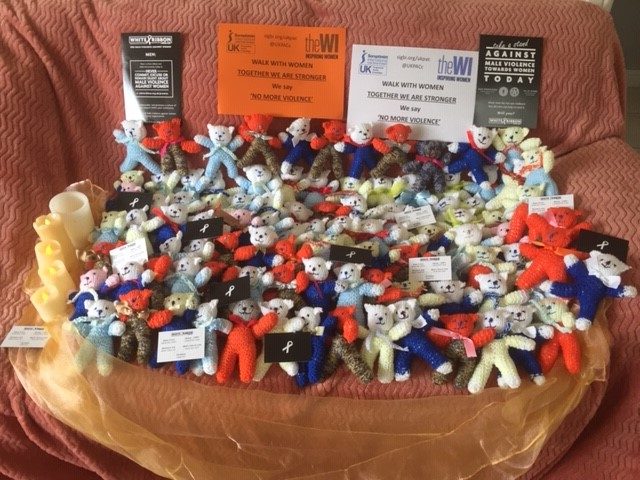 The Pattern is simple for those who knit and can make good use of small pieces of wool left over from major projects carried out during the year.

No 10 (3¼mm) needles Double knitting wool in four colours: Colour 1 for the head and paws Colour 2 for the trousers Colour 3 for the jumper Colour 4 for the scarf. Finishing: Please stuff the teddy with either polyester or other healthy padding. Foam rubber is not recommended as babies/young children might chew it. Do not use buttons or beads or anything hazardous which may become detached and be a hazard to young children.

Instructions: (Numbers can be halved for smaller bears if you have limited resources.)

Scarf : Cast on 75 stitches in colour 4. Knit 4 rows and cast off. Tie scarf on Teddy at the back of the neck, close to the jumper edge. Don’t sew down at the front. Turn right side out and sew diagonal top corners for ears before stuffing.

Sew up Teddy leaving opening in crotch. After stuffing, run a thread through the knitting around the neck to draw it in. Sew a happy face and for mouth use either stem stitch or back stitch.

Crochet Pattern – Made using 8ply acrylic, and a 4mm hook

All dc rows start with a turning chain (ch1) unless otherwise stated.

Dc in second ch from hook, dc across (10 stitches)

Join the colour you are using for your shorts. Dc across for 5 rows, break yarn and finish off.

Do this again for the other leg, but instead of breaking yarn, dc back across this leg, and dc across the first leg you made to join them. (20 stitches)

dc across for another 6 rows

Turn and dc into the second ch from the hook. Dc into the next 7 ch, dc across your dc’s, and chain 9

Turn work and dc in second ch from hook. Dc in next 7 chains and dc all the way across.

Join your white yarn, and dc 17 rows, break yarn and finish off.

Make another of these, sew your face, onto one side, then with the pieces together (face side in) Sew around your teddy, leaving the top of his head open.

Turn it out the right way and stuff. Whipstitch through the front loops along the top of his head for a nice nearly invisible join. Using white yarn, running stitch a line to form triangle ears on the top corners of his head.

Update 29 June 2021.  Many bears are finding homes across the UK and knitting/crocheting has intensified! Importantly clubs are networking with local Refuges and Police authorities.  Some clubs are new to this activity, others have been indulging for years.

Allow me to introduce myself as SI Sevenoaks  Club Programme Action officer and give you the latest  story of the Trauma Bear challenge in the South and South East of England region . It was fortuitous that we held our regional meeting yesterday and I was able to disseminate this  information . Yvonne Freeman launched the appeal at our March regional meeting and you will read
that one of our members responded . Please read  the response of other clubs and the police subsequently,   Isobel Groves Programme Action Officer  Shirley  Brigham , a member of SI Sevenoaks club accepted the challenge and has knitted 6 bears with more to come [please see attached photograph of Shirley with the bears.]
As Programme Action Officer for SI Sevenoaks I contacted Kent Constabulary using their online enquiry web site to ask if they needed the bears and was quite taken aback  to receive an immediate response from DI Richard Pringle  West Kent Child Protection Team saying ‘yes please, how many  can we have ?  Later that day I received two more enquiries from police teams  and also a request from the Probation Service! Too much for one club so I  sent an SOS e mail to our daughter club Tunbridge Wells  who answered with  alacrity and are extremely supportive of
the challenge with knitters in their club. Thank you so much SI Tunbridge Wells.  As the police referrals came from other parts of the county I asked DI Pringle for contact details of other teams together with a Police HQ  in the hope that  other clubs in the region would take up the trauma bear challenge. Perhaps our region could knit the 100 bears between the clubs.
There’s a thought, let’s make it a fact!?

Mission accomplished! SI Sevenoaks did it!

Since the launch of the UKPAC Centenary Trauma Bear challenge knitters in Sevenoaks have been permanently attached to their knitting needles producing Teddies to the extent that the local haberdasher’s shop has run out of stuffing! The shop owner asked the question “is everyone knitting Teddies in Sevenoaks? “ Fortunately supplies are still available online!

To date SI Sevenoaks has made 101 bears. Two members, Shirley Brigham has made 55, Linda Larter has made 6 and a friend of SI Sevenoaks, Maureen Clark has made 40.

Word about the Trauma Bears originally went out through Police channels to the whole of Kent and clubs throughout the region responded  by supplying their local police teams.

Excitingly I received an e mail from Mehdi Fallali who is the Detective Inspector for West Sussex Police Mash Hubs [Multi Agency Safeguarding Hubs] covering Hastings, Brighton and Eastbourne. She liaises with three Local Authority Children’s Services Safeguarding Teams, Women’s Refuges and Response Cars. She applauds this fantastic work in the community and has asked to have a meeting about the project.

I would like to thank everyone in the region who has responded to this challenge wholeheartedly as we are making a difference in helping traumatised children by taking action and have raised awareness of our Programme Action work with other services and organisations. I end this article with two quotes:

A police response after using the Teddies: “the children love them and their faces light up when they know they can keep them.”

A knitter’s comments: “I really enjoy knitting the teddies. You feel you are doing something to help traumatised children. It has been a lovely and rewarding thing to do during a very difficult time for us all. 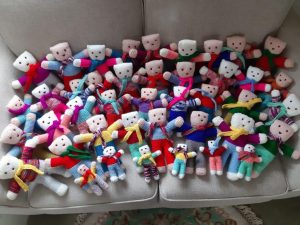 Jess Sinclair at Carlisle, Northern England says that they have been making and donating teddies to the Police. Judith Spencer from SI Cockermouth says that she has one member knitting a Teddy for Trauma at present. Separate from this they have two members knitting teddies for the Cumbria Police to a slightly different pattern to the one you sent out. This is at the specific request of the local police who have used the teddies made by local clubs before & obviously find them useful. Christine Lothian from SI Newcastle says that Newcastle Club have been making Trauma Teddies for many years producing 100’s of them in partnership with a number of knitting groups.  They have been distributed to refuges, to children via food banks at Christmas and young homeless women in their Christmas comfort gift bags.    We partnered with Northumbria Police some years ago when Vera Baird became PCC and all police patrol cars had a couple of bears ready to comfort especially child victims of crime. Unfortunately during the pandemic we aren’t able to replenish supplies due to infection control but there’s many ‘little friends’ just waiting to go when they have their vaccines.  SI Sunderland  have made trauma bears and a trauma bunny: 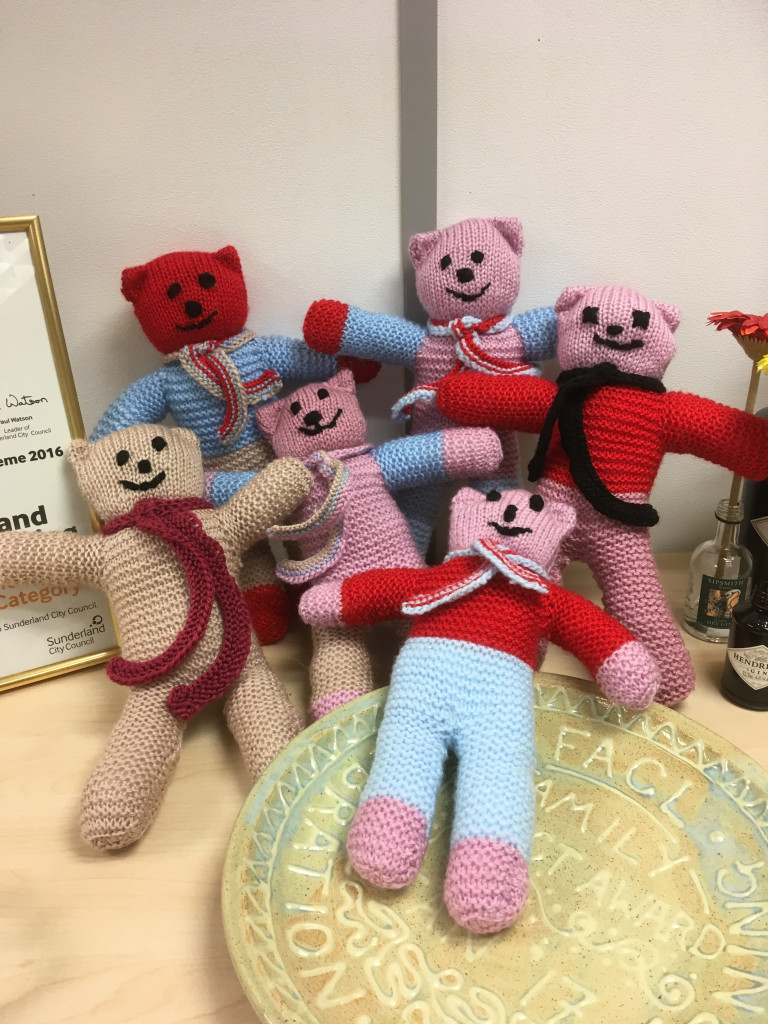 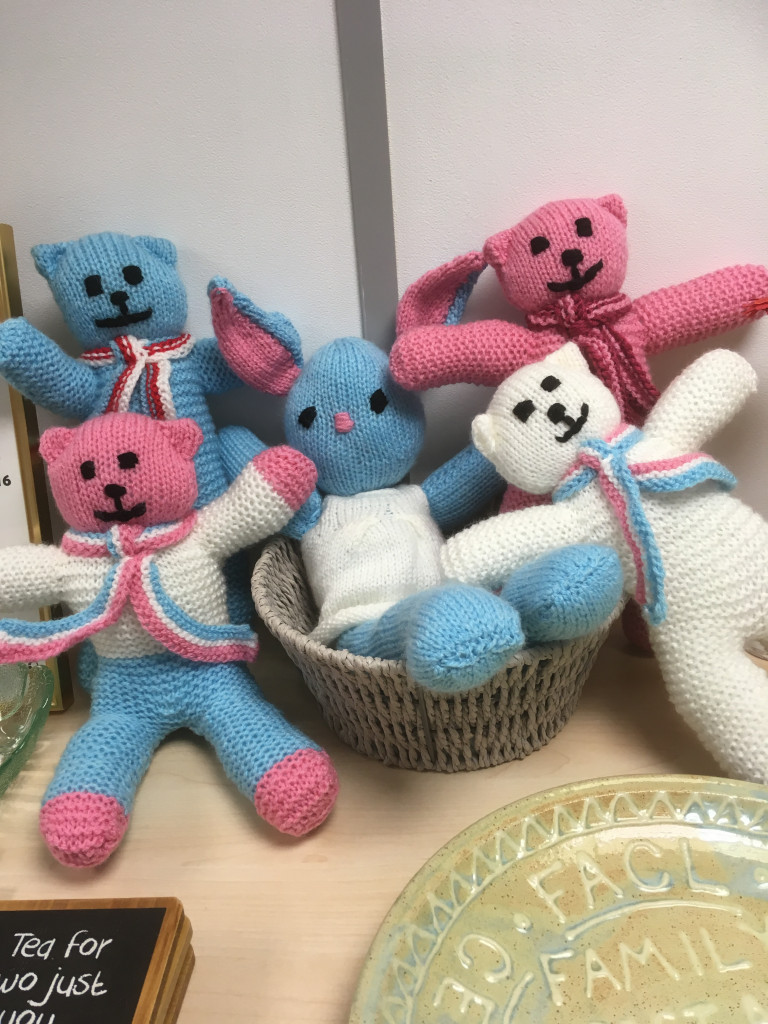 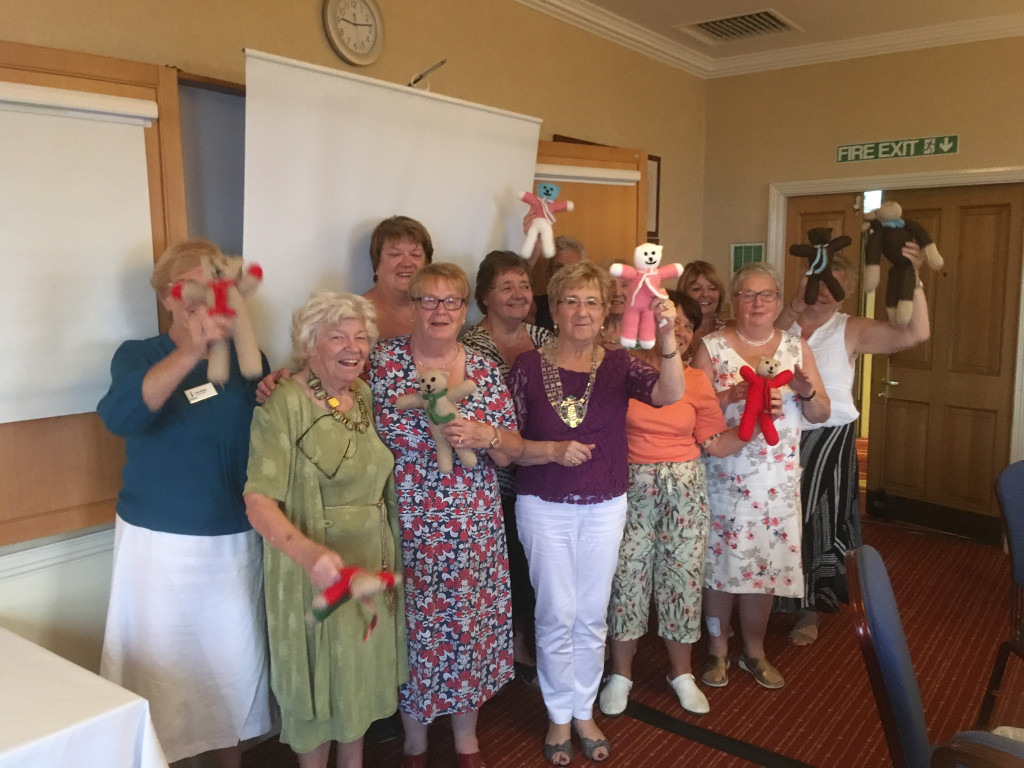 Bobby from Wales South region says that many of their clubs have been ‘doing’ these teddies as well as twiddle muffs and similar for some considerable time. One club has donated more than 400 teddies in the past year!
Brenda Kay from SI Scotland South says that Police Scotland have enough teddies for now but is trying Dunblane fire station. 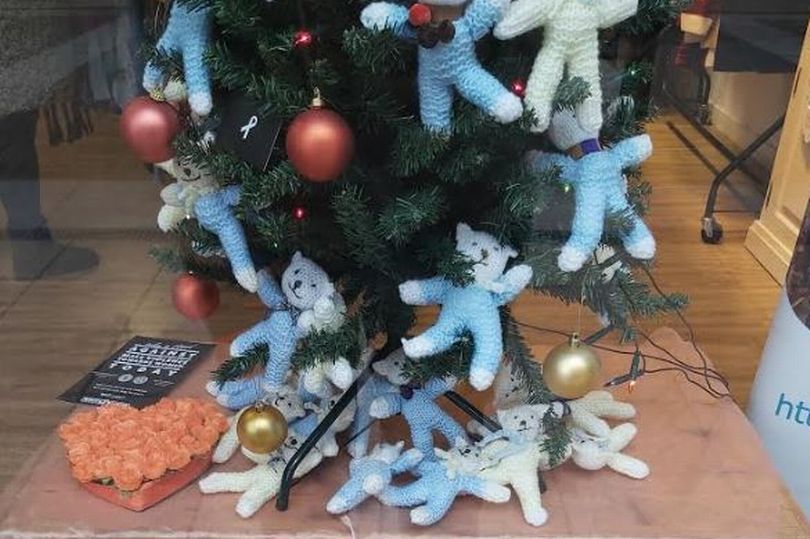 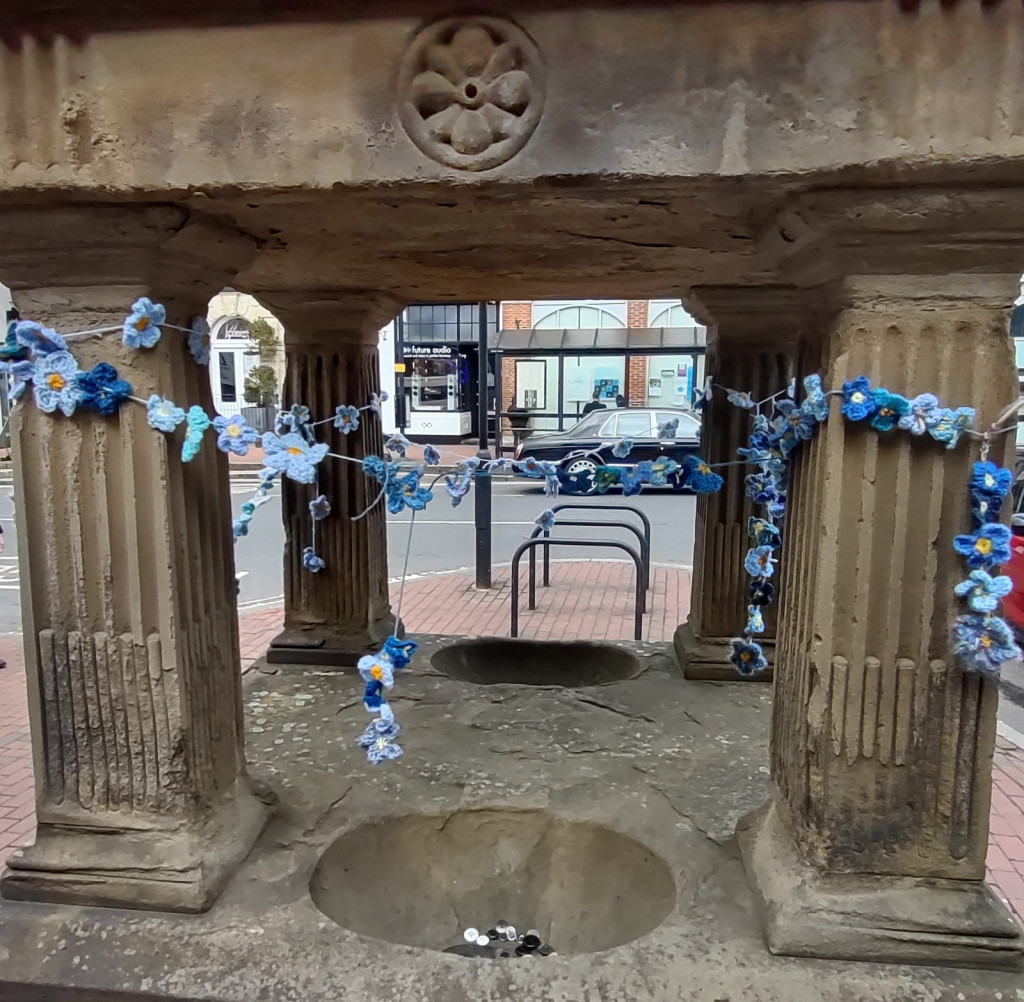 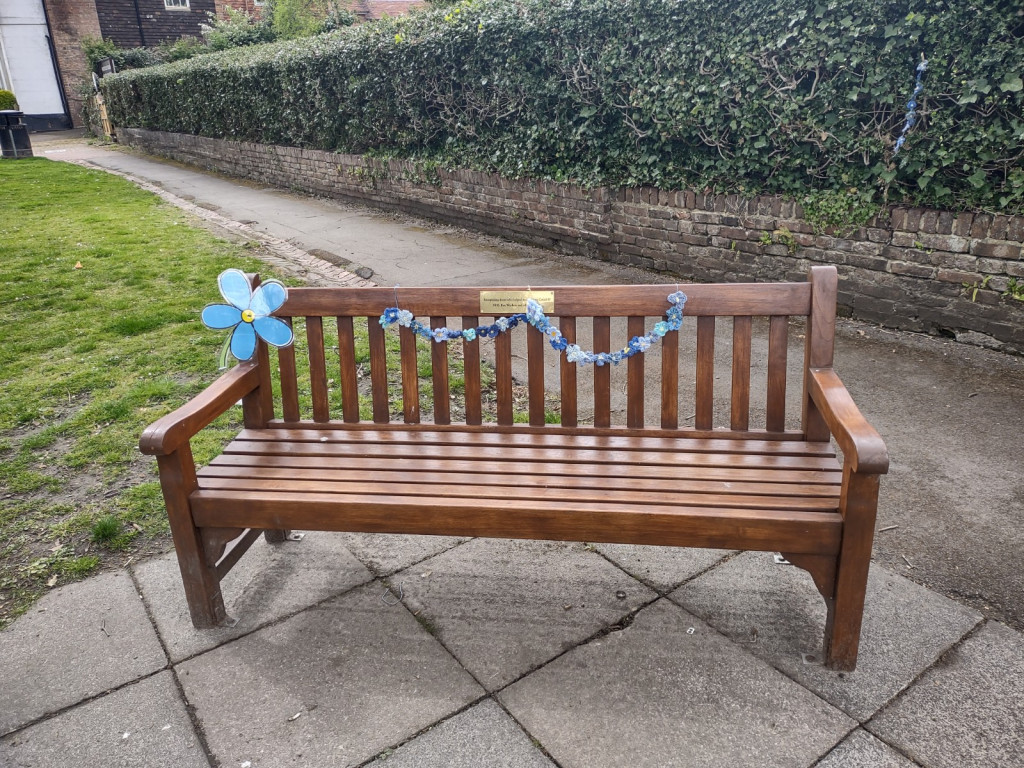 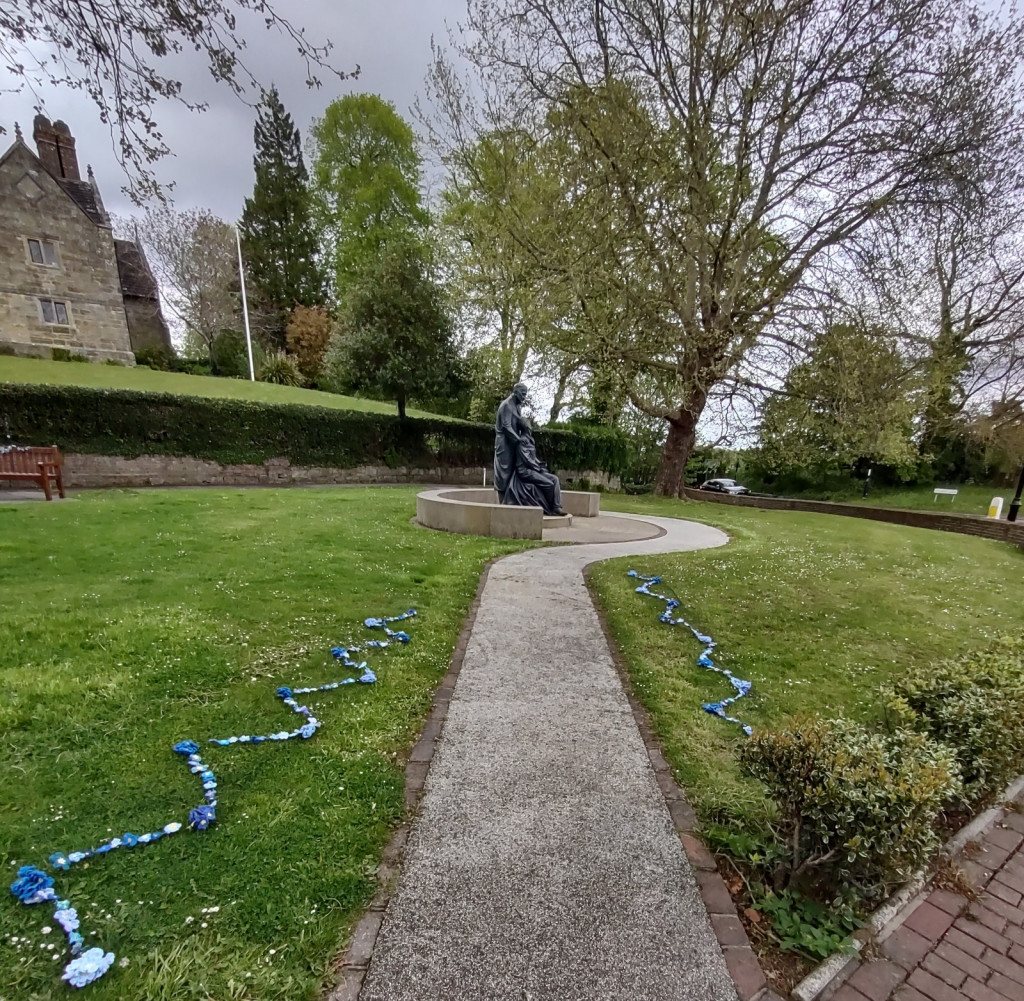 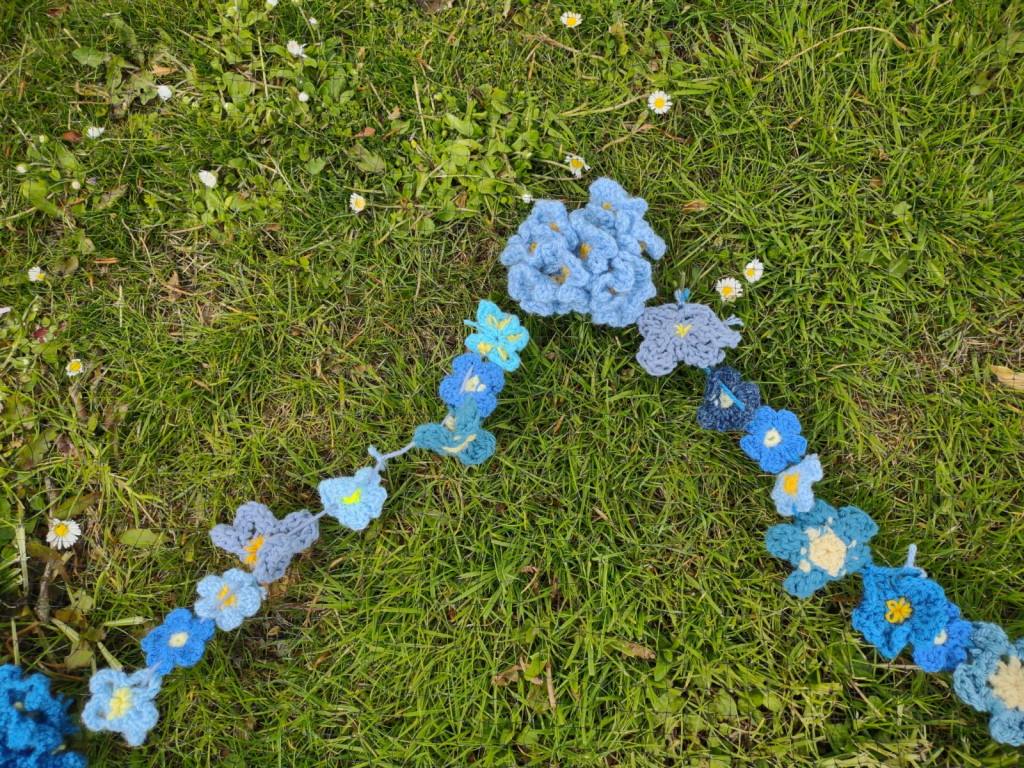 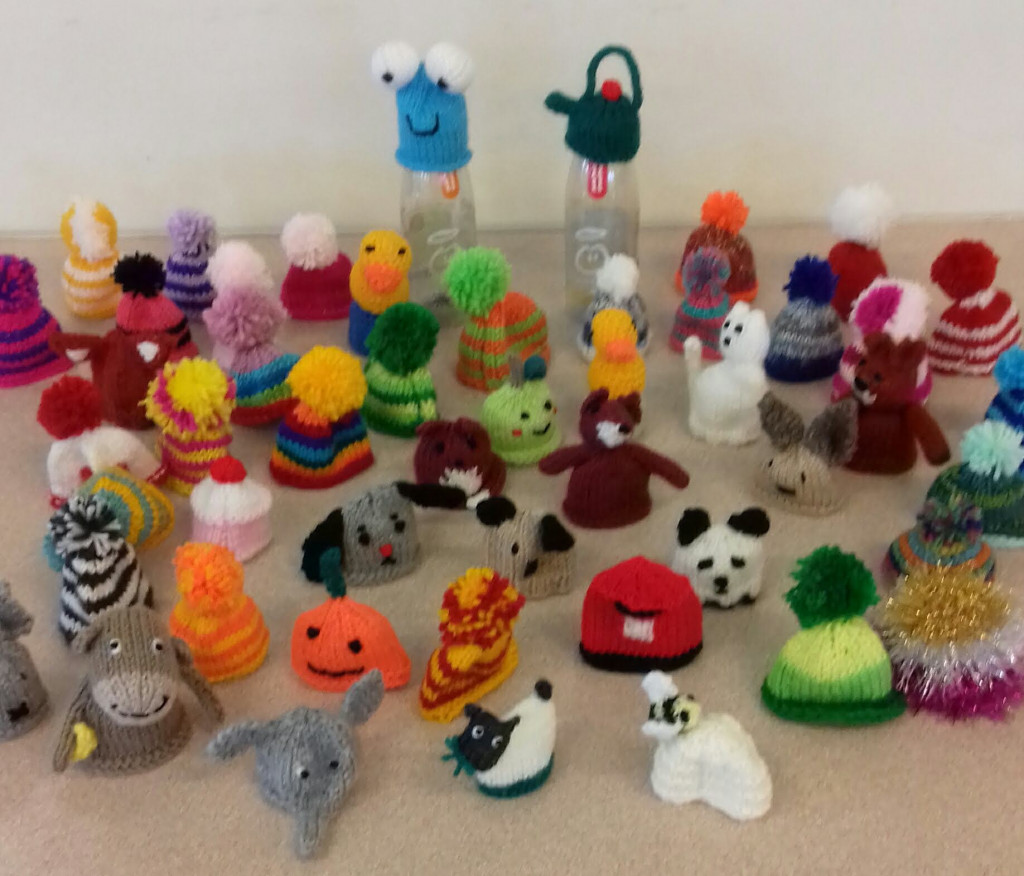 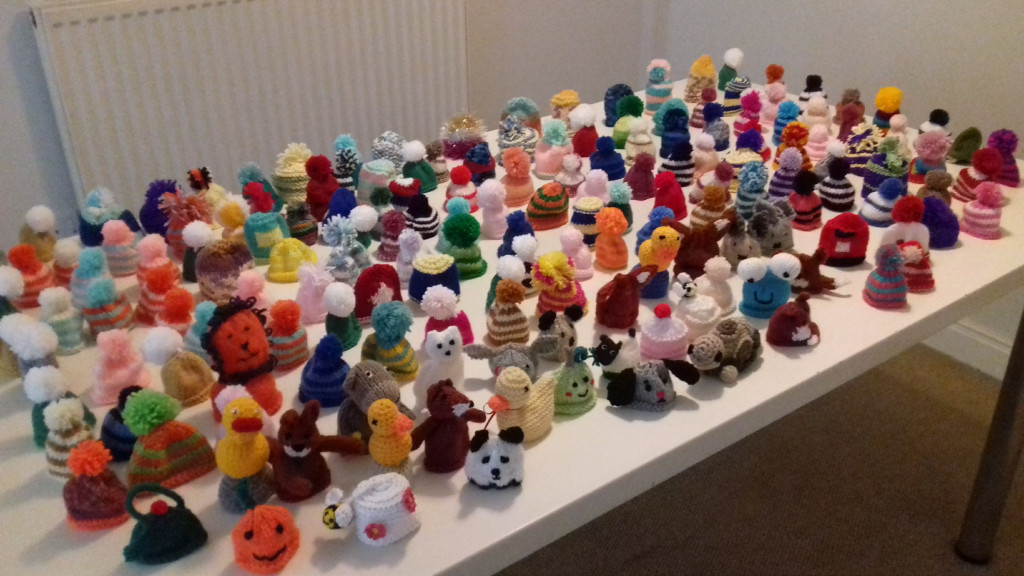