As we move towards 2021 Federation Management Board (FMB) has developed a PowerPoint presentation (https://sigbi.org/members/federation/vision2021/) which will be given to regions by members of FMB – some have had it already. This signals changes to Programme Action (PA, on slides 4 & 9). The UKPAC will need to change as part of this. How should we do so? Region PA Chairmen value highly the opportunity to meet face-to-face because that gives us opportunities to learn from each other directly and to hear of other ideas about how to undertake PA work – through discussing Strengths, Weaknesses, Opportunities and Threats (SWOT) informally. Another acronym, used by FMB is working SMARTer – often interpreted as Specific, Measurable, Achievable, Realistic and Time-bound goals. These are ideals which UKPAC tries to apply in all our work. Because we cover the UK and thus four countries with different governance and legislation, we have added opportunities to learn what works and what does not and to collaborate on UK-wide issues. For example:

We worked across the UK to lobby for the passage of the Modern Slavery Bill. There is still work to be done on ’tied visas’ and for advocates for child asylum seekers – watch out for more on this;

Financial support for Women’s Refuges is less secure in England than elsewhere in the UK;

Wales has specific legislation in place for Domestic Abuse – http://gov.wales/legislation/programme/assemblybills/domestic-abuse/?lang=en with practical advice available on http://livefearfree.gov.wales/?lang=en;

Scotland is leading the way on moving away from imprisonment and towards more ‘family friendly’ provision for women caught up in the Criminal Justice Systems – https://sigbi.org/ukpac/2016/03/10/new-womens-prisons-to-resemble-flats-scotland-news/;

Northern Ireland still has issues around implementation of Women Peace and Security – based on UN Resolution 1325 (see http://www.unwomen.org/en/search-results?keywords=1325 )

Through meeting together at the UK level we can learn from and support each other. It would be counterproductive, in our view, to abolish such networking. That doesn’t mean that we do not want change. We have suggested moving to fewer meetings per year with a Study Day every 2 years whilst liaising more closely with APDs both at and between those meetings. Over the last 2 years we have had presentations from Pat Black, Rayner Rees, 5 members of FMB, Janet Hodgson, and will be hearing from Margaret Clark, Jan Hemlin, Pam Allinson and Rita Beaumont over the course of this year.

Partnership working is also important – https://sigbi.org/ukpac/partnership-working-2/ . We have formal links with several but for now:

Gender Peace and Security (GAPS – Janet Hodgson is our representative); our work on PSVI (Preventing Sexual Violence in Conflict) is particularly appropriate as drafting a resolution to the Security Council at the UN is ongoing at present. It was started at CSW60, at which we were represented by our Vice-Chairman;

The Prison Reform Trust (PRT) – our report with them, “Transforming Lives” – has given us many opportunities to work with others in this area of concern. I sit on the advisory panel for the project funded by the Big Lottery and based on our report – http://www.prisonreformtrust.org.uk/ProjectsResearch/Women/News/vw/1/ItemID/288 ;

I attend the Human Trafficking Forum and one of the other attendees – ECPAT UK www.ecpat.org.uk – is running a breakout session at our Study Day in Bristol on 9 July.

All this is provided from the £3.00 levy per soroptimist in the UK. Details of our budget for 2016/17 are available from your Regional Treasurer and RPAC.

That brings me onto details of Study Day, which is self-funded, not from the levy – https://sigbi.org/ukpac/study-day-2016/study-day-2016-registration-form/. I do hope you can join us to hear from our keynote speakers Kevin Hyland the Anti-slavery Commissioner UK, Juliet Lyon CEO of the PRT and Lucy Russell from Plan UK. The breakout sessions are run by organisations with whom we are engaged at present and who, we hope, will provide inspiration to you all.

An invitation for you to observe how we work is available for our meetings – as silent observers. All are encouraged to participate and they did so constructively at our most recent meeting on 9 April. In future we will drop the word ‘silent’ – that is the opposite of what we would like you to be.  If you are coming to Study Day in Bristol on 9 July do, please, take the opportunity to join us at our next UKPAC meeting on 10 July. We meet from 09:30 until 15:00 and your RPAC can provide you with the form to complete so that we can ensure appropriate arrangements. I am afraid there is a subsidised cost of £25.00, which covers coffee, lunch and hotel charges This provides the opportunity for you to influence us directly as well as learning more about what we do. This can only strengthen the effectiveness of PA across the UK. I look forward to meeting you at one of our meetings and hearing about your concerns and ideas about our future.

I was privileged to attend the 60th Commission for the Status of Women, as UKPAC representative.  The priority theme of this year’s CSW was “Women’s Empowerment and It’s Link to the Sustainable Development Goals”.  The review theme was “The Elimination and Prevention of all Forms of Violence against Women and Girls”.  Many of the topics discussed were familiar to Soroptimists, covering trafficking, violence against women, encouraging girls to take STEM subject etc., however some of the UN sessions, while covering these subjects, did so from an unfamiliar angle, i.e. how governments can help to achieve change and improvement to reach the desired goals.

There was overall a feeling of optimism, following the 2015 Sustainable Development Goals.  But it was emphasised that we now had to ensure implementation of the goals.  The involvement of men and boys in many aspects of achieving the goals and gender equality is vital.

The main business of CSW is to negotiate an agreement as to how to proceed, and SI were heavily involved in this process (although not me personally). The final text, after much negotiation, seems very reasonable.

Overall my attendance at the Commission was a great experience.  It was wonderful to see how strong a presence, and an influence, Soroptimist International has in the process, and reinforced my pride in being a member of our organisation. It was also wonderful to see how many committed people are prepared to work to improve the status of women and girls worldwide. 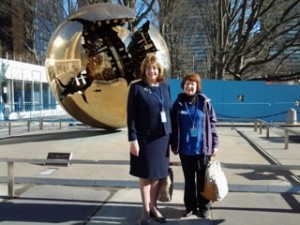 On February 1st I attended a meeting at the Foreign and Commonwealth Office about the progress of the PSVI which was the initiative of William Hague when he was Foreign Secretary. The meeting was chaired by Baroness Anelay ,Minister of State of the Foreign and Commonwealth Office who has special responsibility for the PSVI. The meeting was in 2 parts. The first was  made up of reports from Baronesses Anelay and Verma (The Department for International Development ) and Penny Mordaunt MP Minister of state for Armed forces. The second part was in groups to discuss the way forward.

February 22nd I attended a meeting at the House of Commons organised by GAPSfor the All-Party Parliamentary Group on Women Peace and Security. This was for ministers and officials to update GAPS members on the National Action Plan and its progress. Unfortunately this was the day when David Cameron announced the referendum date and so the MPs were not present. There were quite a few members of the House of Lords though which was a very positive sign that WPS is getting a higher profile in Government.

Both meetings were positive and I came away with the impression that progress although very slow was being made especially in DFID where the secretary of state has announced that all aid will be gender sensitive. MP Penny Mordaunt has included gender training for all troops and will include this is training foreign troops.

An evening meal will be available on the Friday night (confirm with Secretary) – cost to be met by individuals).

Silent Observers are invited to attend UKPAC meetings – please inform secretary.  Cost £25 per person – note if overnight accommodation is required this must be booked by the individuals concerned.