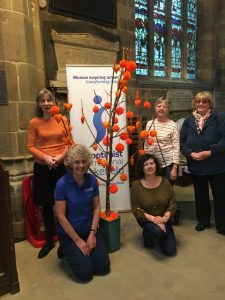 On Friday the 19th November from the afternoon until early evening, members of S I Wakefield joined with members of Wakefield Cathedral’s Mother’s Union in an event in Wakefield Cathedral, to highlight the forthcoming 16 days of Activism against gender based violence.  Wakefield’s Mayor opened the event and took time to visit the Soroptimist stall and was presented with an orange heart, a photograph of which she later posted on the Council’s website.
Members of S I Wakefield manned the refreshment stall providing tea and coffee and homemade cakes and buns. Members were wearing orange and had a display on a tree,  of Orange hearts, Orange pom poms, plus slogans.  The Club also had a table on which they displayed S I Leaflets and leaflets from the Well Women’s Centre and Wakefield Councils Domestic Abuse Service. S I Wakefield had been invited by the Cathedral’s Mother’s Union to join in partnership in this event.
The following Thursday S I Wakefield also had a market stall in partnership with Wakefield Councils Domestic Abuse Team and the Well Women’s Centre, where again they handed out leaflets about Domestic Abuse and the three organisations, plus orange hearts and pom poms.

Find out more at  https://www.un.org/en/observances/ending-violence-against-women-da 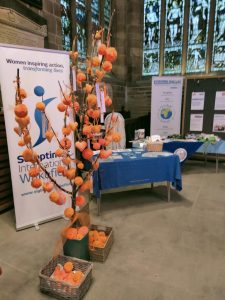 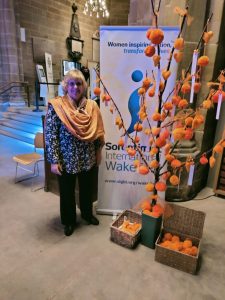