● Dress a Girl Around the World

Update on 21st February 2014:  133 dresses are now ready to be sent to our sister club SI Banjul in The Gambia.  This club has a number of projects with young women and girls in the rural areas of this extremely poor part of West Africa where they will distribute the dresses on our behalf.  We are also spreading the word to other SI clubs.  So far SI Newbury and SI Royan (France) have expressed an interest.

We are grateful to the girls from Test Valley School, St Swithun’s School, The Henry Beaufort School, local Girl Guides and Rangers and to members of SI Guildford and District for their creativity and enthusiasm in helping us to exceed our original target of 100 dresses. 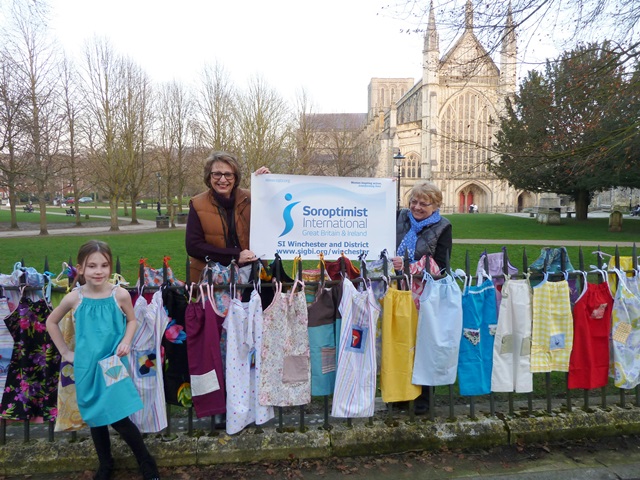 Fourteen attractive pillowcase dresses launch our new project to bring dignity and pleasure to little girls in The Gambia.

We have joined a worldwide project with the simple premise that “every little girl deserves at least one dress”.  It was started in October 2009 by Hope 4 Women International.  Since then the recorded number of pretty “pillowcase” dresses delivered worldwide is over 200,000 to 65 countries.  So, pillowcase dresses are being made with love all over the world and now, working with local schools, Girl Guides and Rangers, we are part of that movement.

Carol Forse and I attended the Test Valley School Fashion Show on Friday 12 July.  As part of their Project Week some Years 7 – 9 students chose a garment project.  Their teacher, Caroline Hudson wanted the 14 girls who had signed up for this project to consider doing something for others less fortunate than themselves as well as producing fashion items.  The girls, aged 11-14 years, were enthusiastic about the project and the pillowcase dresses became one of about 6 items each girl created during the week with the help of their teacher, Caroline, and her daughter, Laura.

When Carol and I arrived there was a high degree of excitement as “Miss” had invited the whole school and staff to attend their end of project demonstration/show.  It had obviously attracted a huge amount of interest because far more students attended than were expected and the girls and “Miss” were somewhat taken-aback and rather intimidated – particularly by the male attendees!  Fortunately a Deputy Head with a strong personality also attended and the audience was very well behaved.  One rather diminutive girl eventually came out of her shell and turned into a real performer, much to the delight of the audience and to a point that it became quite difficult to get her to leave the stage!

Before the Fashion Show, Carol spoke to the girls about Soroptimism, why she had become a member and the kinds of things we are involved in as a club.  We both answered just a few questions and some leaflets and fliers were left for them to look at after the event.

After the show and photo-call, Carol and I were presented with 14 dresses.  The girls had used a great deal of individual style and talent in their own personal creations and we were delighted to receive them as the start to our own project. 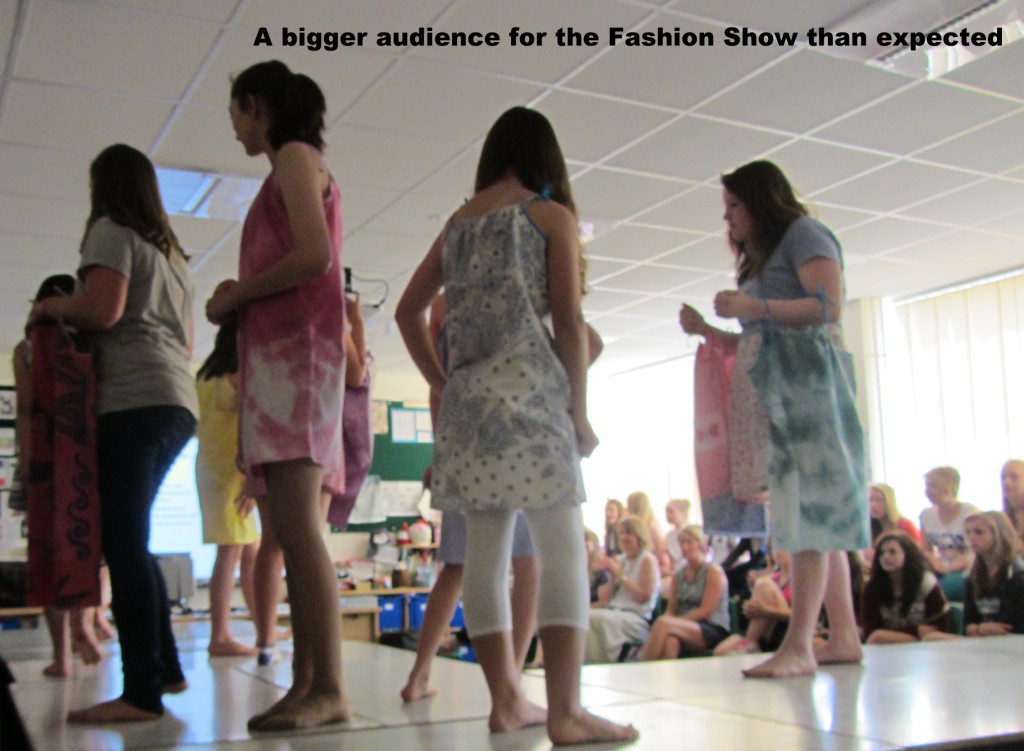 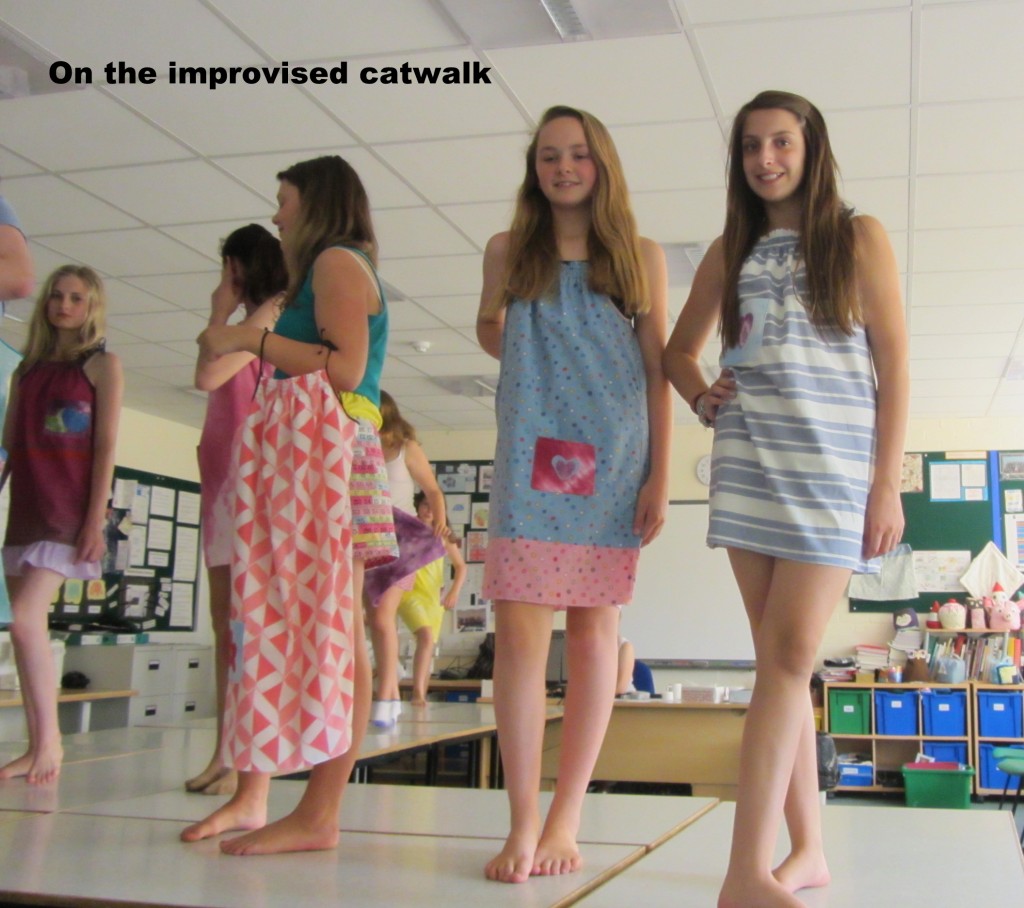 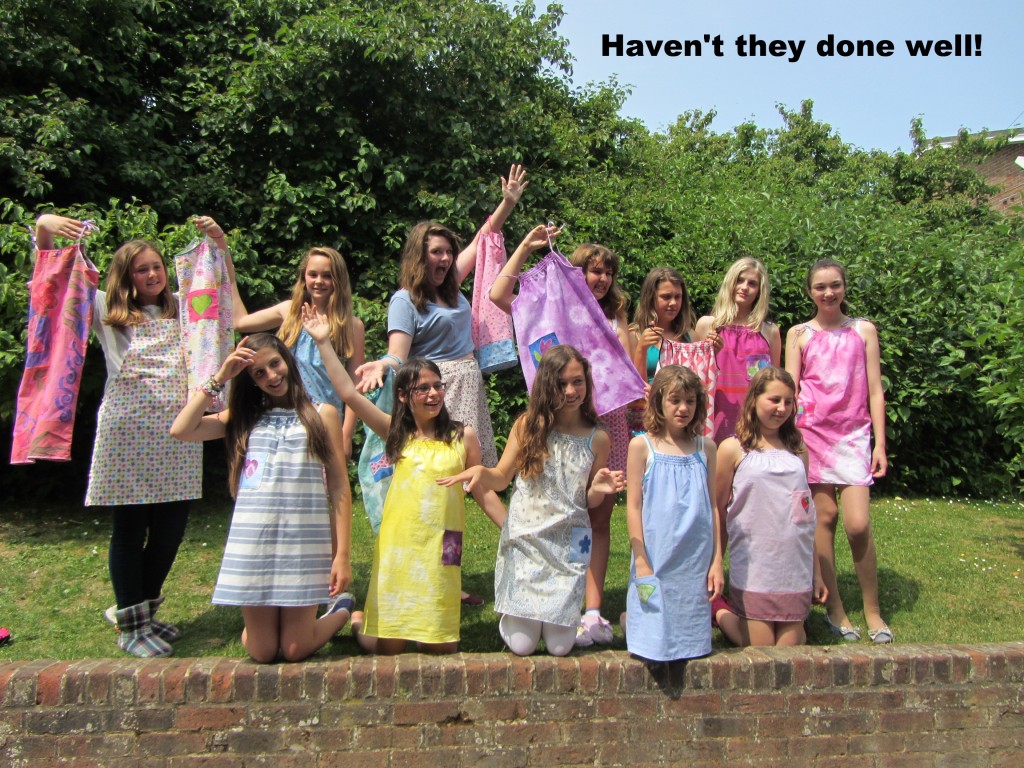 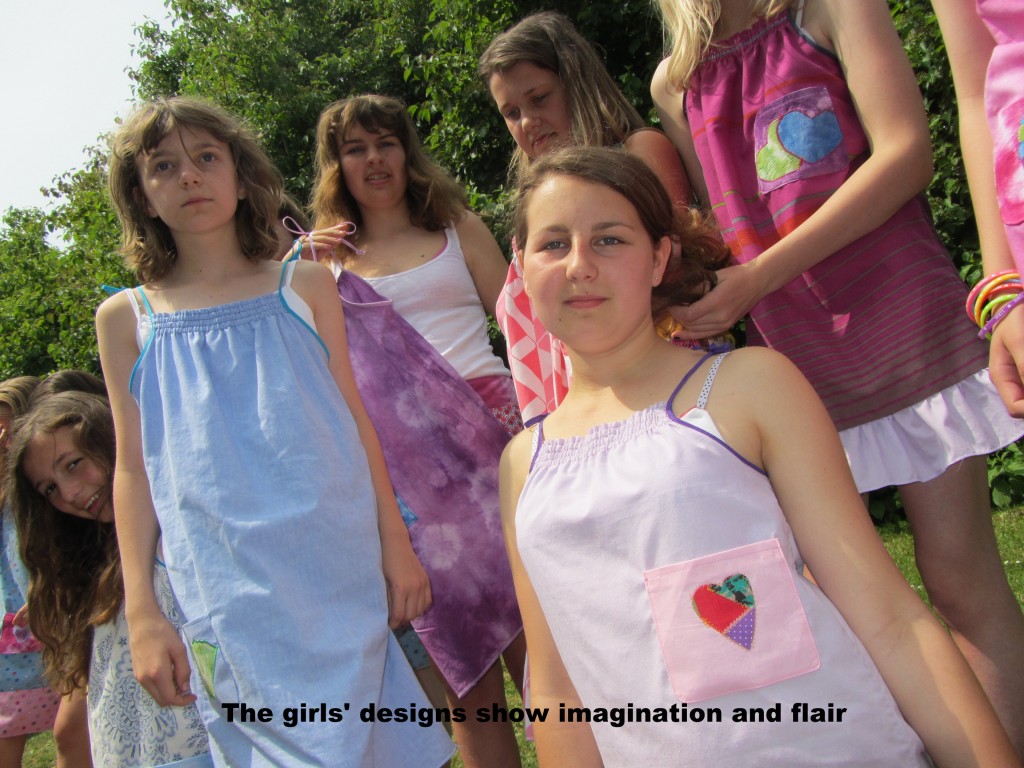 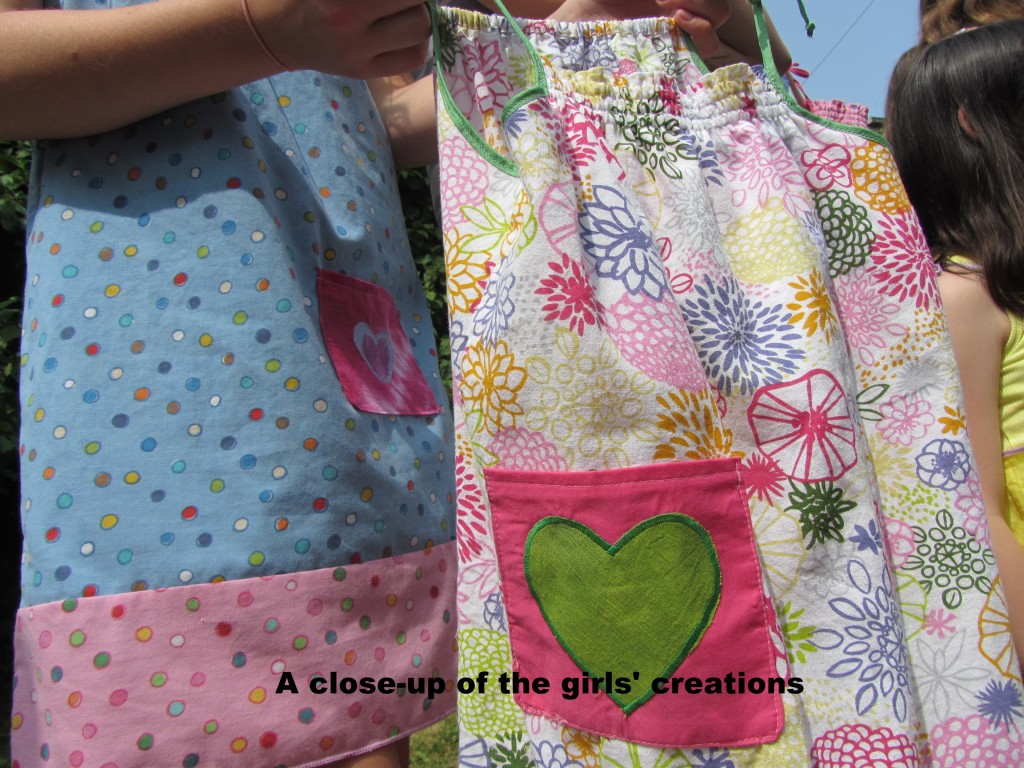 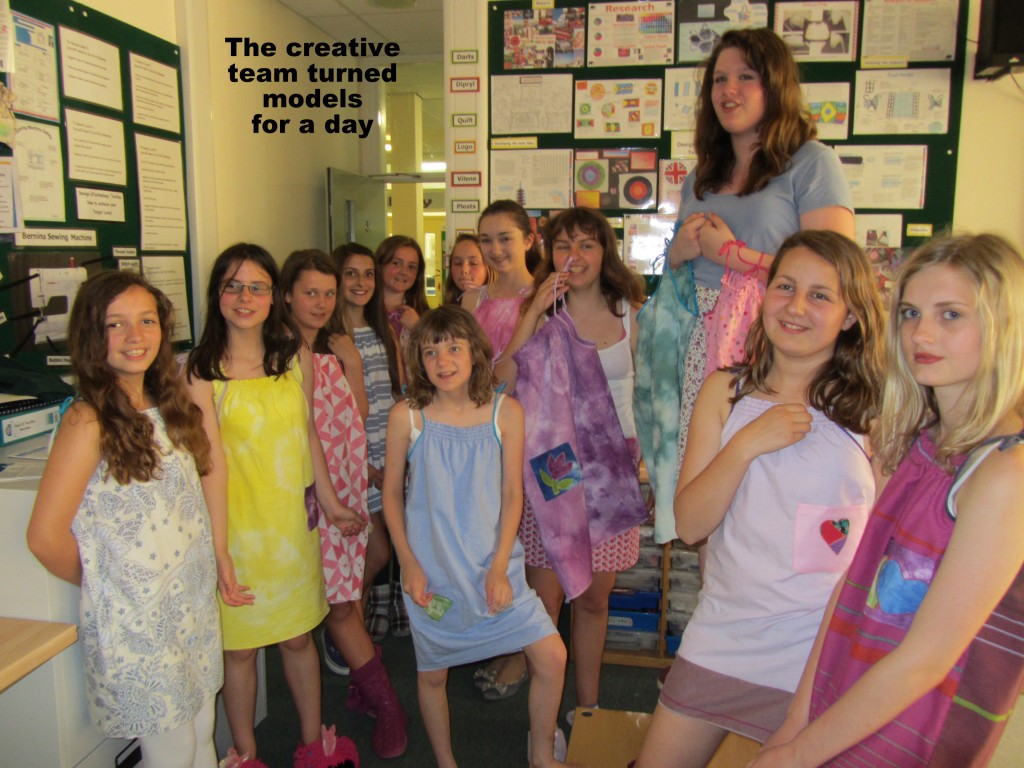 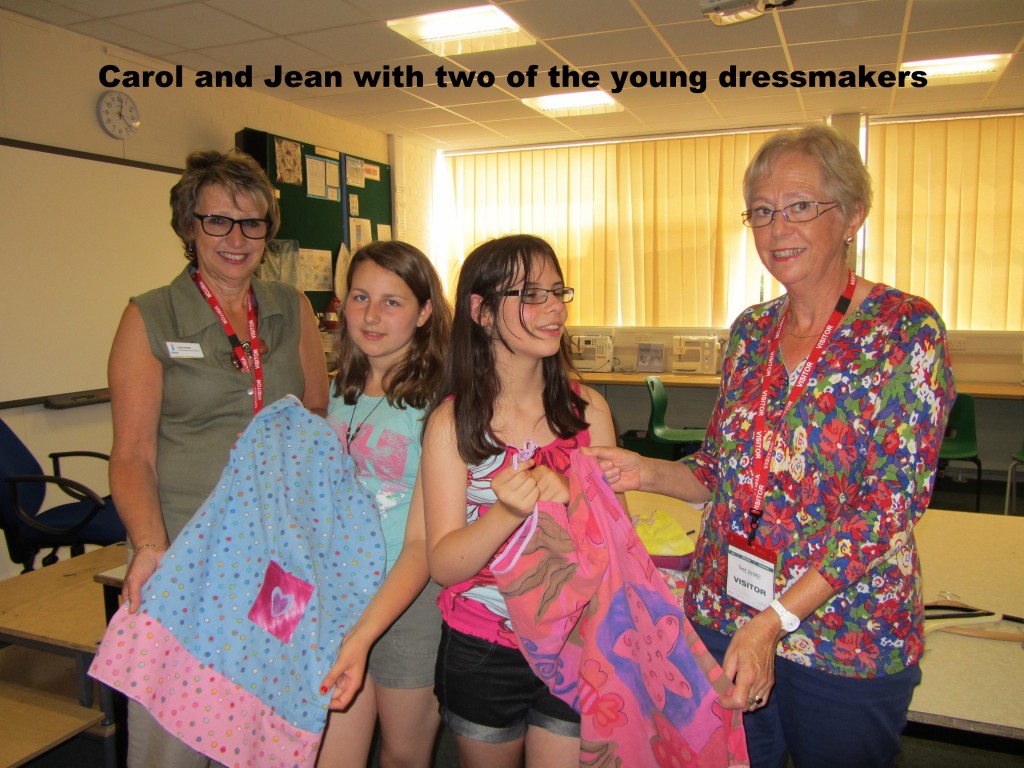 To pause on a slide just “mouse hover” over it. 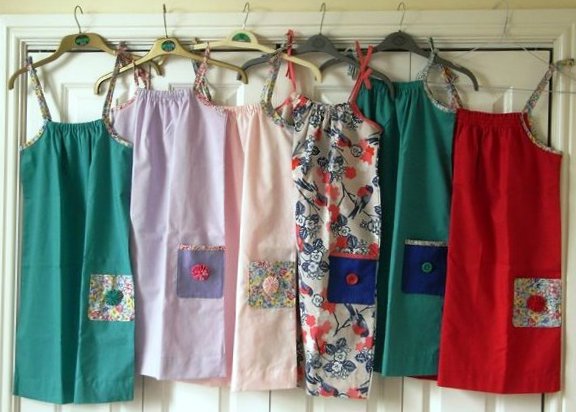 Here are six of the delightful pillowcase dresses.
A lot of creativity and skill was used to make each dress special.