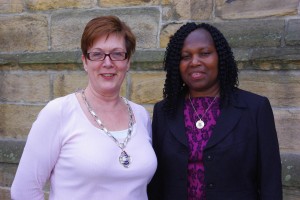 “A meeting to discuss the formation of a Venture Club in Bradford was convened at the Bradford Ladies’ Club on Friday 14th September 1928 by Miss E Matthias and Miss A Chalmers-Lawford”. So reads the first entry in the minutes of the Club and, now called Soroptimist International Bradford, Mrs Sandra Howard has been elected as its eighty-second President.

Sandra is PA to the Dean of Bradford & Cathedral Administrator and has been a Soroptimist for just over two years: she is also on the Lord Mayor’s Appeal Committee.

“When approached to join SI Bradford I had heard of Soroptimists but wasn’t sure what they actually did! The official line is that ‘Soroptimist International is a worldwide organisation for women in management and professions, working through service projects to advance human rights and the status of women’ which sounds great but a bit vague – but there is nothing vague about what SI Bradford is involved in. They had the original idea for the Bradford Schools Drugs Prevention Initiative and members work tirelessly, with Rotarians, to get the Say No To Drugs message across in secondary schools in the area. Following the fire at Valley Parade the club raised almost £1500 in donations from Soroptimist clubs worldwide and one of our members sat on the allocation committee. We have raised money for publicity leaflets for the Rape Crisis Centre; and this year my charity is UNICEF’s School in a Box project. My theme for the year is Partnerships – the Way Forward and my programme of speaker-meetings for the year includes Mrs Nuzhat Ali, the Cathedral’s Interfaith Development Officer, and Helena Danielczuk, Chair of the Federation of Poles. We will also be having speakers from the Turnaround Project and the Parliamentary Outreach Team. Later this month we will be joining other local clubs and hosting an evening for two Soroptimists from Zimbabwe, visiting the area on a Grant of Friendship, to strengthen our international links.”

SI Bradford meets twice a month, usually at Soroptimist House near Lister Park, but also join with other local groups as well as attending regional, national and international meetings, and for social gatherings. While working tirelessly to improve the lives of women and children throughout the world, members of SI Bradford enjoy themselves and forge new friendships.