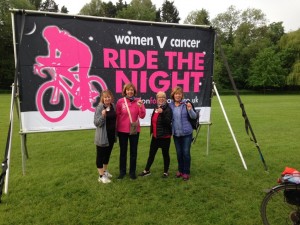 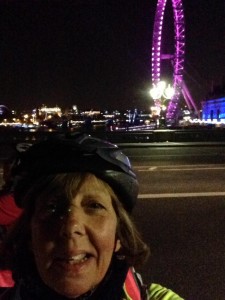 Just to let you know I completed the ‘Women vs Cancer’ Ride the Night in London on May 28th 2016 !!!
Six of us from the Llyn took part in the cycle ride, however I was the only Soroptimist. Riding in memory of Andrea Roberts, who I missed greatly.
It took 6 trains, 2 taxis and a car ride to get to start of the race at Windsor Racecourse, so we had done a day travelling even before we started!!  Thank heavens we had hired bikes!!
We arrived and I immediately bumped into our wonderful childminder of 26 years ago – amazing considering there were over 2,300 riders taking part not to mention all the friends and family members giving their support.
We were given our bikes , registered and had something to eat- not very appetising, but I am fussy!!!   All I really wanted was a G & T, but if that was not available a cup of tea would have been great but the queue was massive.
At 10.30/10.45 we set off. The sun had set and the long night stretched before us.  The ride was easy on the roads and great fun going through Windsor, Richmond, Twickenham and into London.   The Eye was lit pink for the charity and Big Ben struck 2am as we rode under it – which was very memorable.  We carried on under Admiralty Arch, after going down the Mall which was surreal.
Everywhere had a great buzz with people cheering us along and coming out of their houses with words of encouragement . Sheets hung from windows – again giving us a boost.
The last hour was a hard push not to mention a hill higher than anything we had practised on here!!!    We had all been rather scornful about the hill after what we had practised on here but it was a long hard ride – and at the end of the course.
We did the 104km in 6 hours so felt very pleased.
We would all like to say “thank you” so much for the generous donations towards the charities.
We had “Ride Angels” checking up on us and I felt Andrea was certainly looking after us as we all got back safely and with no punctures!!!!
on our way home on the train from Euston to Crewe we decided  to sit and pay the extra in first class having missed a complete nights sleep.  A young man heard what we had done and paid for all our up grades.  As kindness is your theme for this year I felt it should be mentioned .  We were so touched by his kindness and never found out his name except that he was Irish and going to Liverpool.  Ps. He had his girlfriend with him!!!