In 1962 whilst the world held its breath over the Cuban Missile crisis and The Beatles released their first single, Soroptimist International of East Grinstead was born. Today, 60 years later, the Club is flourishing with 33 members and playing an active role in the local community as well as supporting projects overseas. 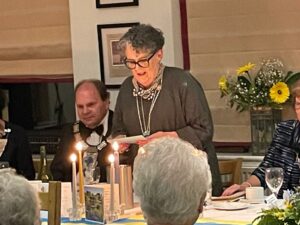 This year’s President, Sue Darney, has overseen a weekend of celebration with a Tree planting on Friday 23rd and a Celebratory Dinner on Saturday 24th September. For a period of two weeks spanning the celebration weekend a display illustrating the history and work of the Club appeared in the window of East Grinstead Library. 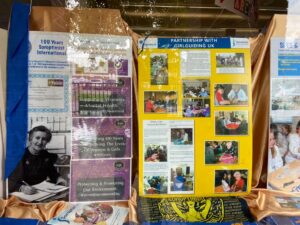 The dinner on Saturday evening was held at a nearby Golf Club and we were honoured to welcome the Mayor of East Grinstead, Councillor Adam Peacock, SIGBI President Cathy Cotteridge, President of our Mother Club Tunbridge Wells, Caroline Auckland, South East Region President, Yvonne Freeman and South East Region President Elect, Lynne Chiswick. The room was beautifully decorated with floral displays prepared by a Club member. 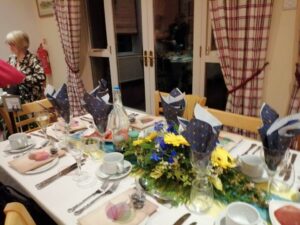 Elegant and attractive programmes produced by the Club’s Art Group adorned each guest’s place alongside silver-painted pine cones holding the place names. The meal began with a selection of Italian meats, olives and bread followed by a carvery and dessert of fresh fruit pavlova. Cathy Cotteridge cut the celebration cake iced in white and blue with the Soroptimist badge. During the course of the evening the name of every former Club President was read out and those who were in attendance stood to enthusiastic applause. 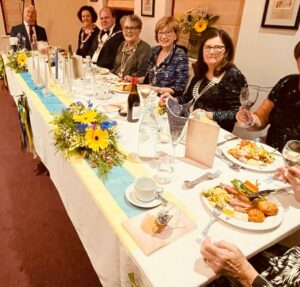 ShirleyTricker (1982-1983) and Betty Deller (1983-1984) were the earliest Past Presidents who were able to attend.  As each decade was mentioned a candle was lit at the top table. Before leaving for home each guest was given an organza gift bag of fudge hand-made by a Club member.

This was definitely a weekend to remember and we look forward to celebrating our next milestone in 10 years’ time.

Club Homepage
About Our Club
Club News
Contact Us