On behalf of the Inverness and Nairn Club, I want to share with you my memories of 1 remarkable woman and, although its a bit before my time, one memorable event!

I have been a soroptimist for nearly 30 years.   When I joined the club I was in awe of many of the older members and what they had achieved in their lives despite the odds being stacked against them long before gender equality in the workplace was given the prominence it now has.

However, one of these older members stood out for me.    She was a quiet, unassuming lady, always smiling and great company if you sat beside her in the meeting.   She was the antithesis of someone putting themselves forward or having strong opinions, but behind that quiet exterior there was an enormous intellect.

The lady was Dr Maeve Rusk, an ophthalmic surgeon in Raigmore, our regional general hospital for the Highlands in Inverness.

We sadly lost Maeve shortly before her 93rd birthday in 2011 and for many of us it was at her funeral that we heard the full extent of her achievements.

Maeve was born in St Andrews in 1918 and moved to Glasgow when she was 5.  She was a poorly child suffering from all sorts of infections, particularly bronchitis, so much so that she was 6 and a half before she was well enough to start school.

However, at 17 she won a place in Glasgow University where, for a year she studied botany and zoology as she was too young to get into the medical faculty.  She graduated during the Clydebank Blitz and went on to study Opthalmology.

The shortage of male doctors during the war years meant that she was thrown in at the deep end of hospital routine.  In 1942 she joined the Armed Forces as a medical officer.  Attaining the rank of captain when the war ended, she volunteered for Burma but was sent to Germany instead.   When asked by a general whether she had difficulty disciplining the men, she characteristically replied “no sir, I mothered them!”

Turning down an offer to become a regular, she was demobbed back to Glasgow in autumn 1946.   Being a keen ornithologist all of her life, she did duck counts on the river Clyde during her lunch break.

In 1954, a year after her mother died and her father had retired as acting Principal of Jordanhill College, Maeve moved to Inverness to become the first female appointed to a medical consultant role in the Highlands.

Maeve continued her keen interest in ornithology and was a loyal member of Inverness Bird Club for the rest of her life.

Maeve gave an initial impression of being a shrinking violet but she could hold her own.   Theatre staff in Raigmore were under no illusion as to who was boss and she was known to swear under pressure – she maintained that she learned this during her war service!    In her travels round the Highlands as a consultant she was also known to have knocked over an importunate passenger on an interisland ferry.

Amongst the many foreign students she trained was one from Pakistan.   When he rose to be her opposite number in Karachi, she visited him and his family every year, adopting salwar kamese and becoming fluent in Urdu.  She continued her annual trips to Pakistan until shortly before her death, having to give up as her health failed.

Maeve was a soroptimist for over 50 years, President of the Inverness club from 1959 – 61, a regular attender at meetings and an active participant in club projects until shortly before her death.   A gentle feminist, Maeve was a pioneer and a remarkable woman.

The memorable event I would like share is the report in the Inverness Courier of the inauguration of the Inverness club in 1935.  Nairn was added later, during my presidency in the late 1990s.

It is great that Inverness was created only 14 years after the first Soroptimist Club was chartered in Oakland, California. 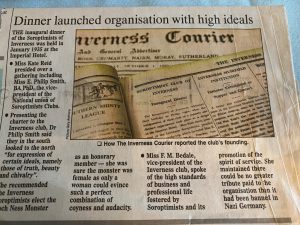