IWD has been observed for over 100 years in different guises.  In 1977 it was designated by the United Nations as ‘Day for Women’s Rights and World Peace’.  More recently, each year has a different theme.  For example 2013 was ‘Time for action to end violence against women’ and in 2014 it was ‘Equality for women is progress for all’.  It is a day that Soroptimists worldwide celebrate, so that includes members of the Ipswich Club.

On 8th March 2015 was International Women’s Day (IWD) members of our Club went to Cambridge for the Regional meeting and the morning session consisted of a discussion of ‘What Women Want’ to ultimately write a letter to whoever is Prime Minister after the General Election outlining women’s concerns.  The expert contributors were The Principal of Newnham College, Dame Carol Black, Janet Dalrymple, CEO Safer Places, Julia Jaeger, retired Metropolitan Police Inspector and Penelope Brearey-Horne, lecturer in Human Rights at Essex University.

After their short presentations and discussion the letter was drafted.  In the afternoon our members attended the ‘Women of the World’ WOW event. 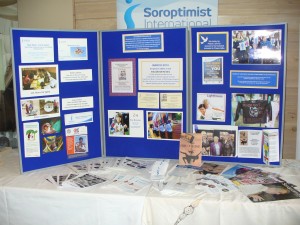 On 7th March 2014 members from the Club, for the second year running, attended the very successful University Campus Suffolk (UCS) IWD Conference ‘Inspiring Change – Working together to achieve your full potential’.  Following presentations from six inspiring speakers there were two workshops (‘Creating the future and making it real’ and Using social media to your advantage’).  We were fortunate in having a stand there to publicise what we do as a Club and organisation. 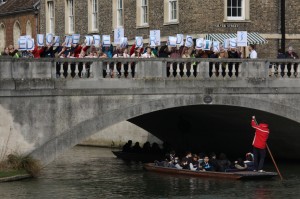 The following day, the actual IWD day, Club members joined members from the other Soroptimist Clubs from East Anglia on Silver Street Bridge in Cambridge to raise awareness of the forty million girls around the world who do not get an education and therefore are more likely to end up poor, pregnant and subjected to violence.  They asked the Government to urge other countries to give all the girls in the world an education.

They took part in a performance with young dancers from a stage school to spell out in l7 inch high letters EDUCATE THE WORLD’S GIRLS.  A video was made and can be seen at Educating the World’s Girls

And as a practical step, they collected hundreds of book for a charity to send directly to schools across Southern Africa.