THEME: The Difference Women Can Make and Help Others to Make in Our Communities SPEAKER: Janette Devlin, Development Links Scotland- Training and Development Co-ordinator and Activate Tutor for Glasgow University. The aim of the evening was to explore how women … Continued

Nine Soroptimists from Scotland North joined ten members from Scotland South on a four day visit to Geneva. Included was a guided tour of the United Nations Palais des Nations. An opportunity to learn: about the work carried out at this … Continued

The  Region meeting was held in Aberdeen on Saturday March 9th in the Douglas Hotel. The business meeting was followed by a celebration of SI  Aberdeen ‘s 90th Anniversary. The speaker for the event was Professor Pedersen who spoke about the … Continued

Sleep in the Park

On a cold December night, Scotland North President Prue and two other brave members of SI Dundee took part in the ‘Sleep in the Park’ event organised by Social Bite to raise awareness of the homeless in our society.   … Continued

Sleep in the Park

Regional President Prue is bravely taking part in Sleep in the Park. This is a nationwide sleep out to end homelessness in Scotland for good. Four Cities across Scotland . One night 12,000 people under the stars. Saturday 8th December, 2018. … Continued 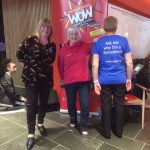 Soroptimist members Ann Bellingham (Perth) and Christine Perry (Crieff) were delighted to let everyone attending the Women of the World (WOW) 2018 Festival in Perth hear about Soroptimist International and the work done locally,  nationally & internationally. The second … Continued

CONGRATULATIONS  TO SI CRIEFF The September Scotland North Region meeting was held in Crieff.  An event at which the local club also celebrated their 60th anniversary. Scrumptious cup cakes were served to mark the 60th anniversary. Corrie McNeill gave … Continued

Scotland North Clubs Get Together for a Beach Clean

Soroptimist Day of Service and Friendship On a wet Friday morning on July 20th – the only wet, cold Friday in July- a group of Soroptimists congregated on Broughty Ferry Beach. Friends from SI Crieff and Perth joined SI Dundee members … Continued