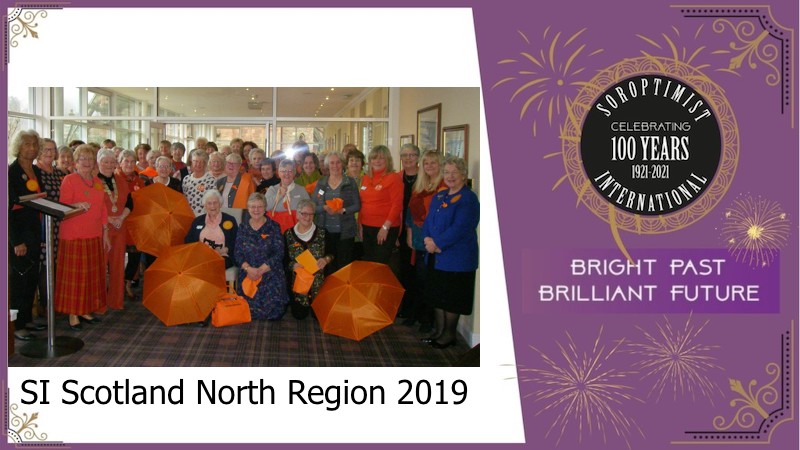 Soroptimism started in California in 1921 and reached Great Britain in the mid-1920s. All the Soroptimist clubs in Britain were originally part of the European Federation but in 1934 a new federation, the Federation of Great Britain and Ireland, was created. The new Federation’s Board established nine Divisional Unions (DUs), to serve as a link between clubs and the Federation. Begun on an experimental basis for one year, DUs were formally constituted in 1936.
In March 1936, a territorial rearrangement found Divisional Unions Scotland East and West replaced by Divisional Unions Scotland North and South, with the Glasgow and Edinburgh clubs in the South, and Aberdeen, Dundee, Inverness and Perth making up the North. These four have since been joined by two other clubs, in Crieff and Easter Ross, and for some time there were also clubs in Elgin, Pitlochry and St Andrews and District.
Scotland North DU meetings were held four or five times a year in the different club towns, and for many years each club took its turn in providing the DU president and secretary. In the beginning only the DU officers and elected club representatives could attend these meetings, but often met afterwards with local club members ‘for refreshments’. This gradually changed and any club member could then attend meetings as a silent observer.

In 1990 it was resolved at the Federation conference that Divisional Unions should change their name to Regions and so we became Soroptimist International Scotland North Region.
Regional meetings are now full-day events and, in addition to the Regional Council meeting, may include speakers on topics of Soroptimist’s interest, and training and interactive sessions for the wider membership. As one club president commented back in 1961, ‘to go out and meet Soroptimists of other clubs is a wonderful experience and an opportunity to find out what other clubs are doing’.
The annual Joint Scottish Conference, which is organised alternately by SI Scotland North and SI Scotland South, is another chance to do this, and is a key date in the calendar for Scottish Soroptimists. The first meeting of all Scottish clubs took place in Perth in 1934, and since then these conferences have been held almost every year, in venues across the country from Ayr to Inverness.
Members from Scotland North have also played a role on the wider Soroptimist stage. The annual Federation conference has been held in Scotland North three times, in Aberdeen in 1936, 1957 and 1962, with local members having a major part in organising and running each event. Two Scotland North clubs have provided four Federation presidents: three from Dundee – Dr Edith Philip Smith (1935–36), Dr Priscilla Turnbull (1980–81), Dr Hilary-Kay Young (2006–07); and one from Aberdeen – Dr Mary Esslemont (1961–62).
Perth member Pat Carruthers served as the Soroptimist International treasurer from 2011 to 2015. When the Soroptimist International Convention – a quadrennial meeting of all four Soroptimist Federations – was held in Glasgow in 2007, Scotland North members acted as flag bearers and stewards, and also put their craft skills to use to provide 1,500 thistle suncatchers for the delegate packs.
Within Scotland North, members often support the fund-raising or programme work of nearby clubs, and have also worked together right across the region. Ten members walked the 45 miles of the Speyside Way in 1996, being joined by others for shorter stretches, to raise money for the Soroptimist International AIDS Mediation quadrennial project. In 2001, clubs donated funds to furnish four rooms in the Saartjie Baartman Centre, a refuge for abused women and children in Cape Town.
Members of Scotland North clubs have also enjoyed several activity and social weekends together, at The Burn, near Edzell, and in Pitlochry, giving everyone a chance to get to know their Soroptimist sisters rather better.
We are now tackling the problems of the 21st century in order to continue to make a positive difference for women and girls locally, nationally and internationally.