Programme Action is one of the key components of Soroptimism in which members can work to address these issues:-

Key Objectives are to:-

Once again it has been a very full year.

The Avril Fishwick mentoring scheme has continued and has gone well. We have supported a group of girls chosen by their College Mentor. We again participated in an Open Evening, where we believe the Soroptimist Brand was given prominence. Four  meetings are held per year and are to continue before the summer break to allow us to meet a new group of girls.

The Brick has continued to receive our support from the cash donation of £500, the gifting of sleeping bags with Rotary and our Christmas shoe boxes.

Poppies were once again knitted by our members and gratefully received by the British Legion and sold by them.

Once again thank you to all our knitters and finishers of chicks. Again we had a stall at the Regional Meeting in March when the chicks and other items were sold. More chicks were sold at the Hospice who also provided the chocolate eggs.

Once again we had a very worthy winner Beatrice, a pupil at St John Fisher School. She has overcome long term illness and many hospital admissions, but this has not let this daunt her and she works and plays hard. All members of SI Wigan who attended her award ceremony at the Town Hall enjoyed the ceremony and the graciousness of the Mayor made the vent very special.

We are continuing our partnership with DIAS. We are funding their “Life After” Project and have supported them during the year with other gifts of money and the Christmas Pamper Boxes.

Money has been raised over the year via our social events e.g. Meals at the Wheel Restaurant, Equalitea, the Christmas meal, Walk the Memorable Mile also supported by Helen Pat’s daughter who raised money for cancer research , the January Quiz, the Christmas card donation and the wonderful bike ride to Paris undertaken by Phil.

SI Wigan and SI Leigh continue to support the Ashton Leigh and Wigan Osteoporosis Support  Group and members from both clubs are on the Committee.

Stamps continue to be collected to support Stamps for Lepers.

Members of SI Wigan continue to support the Regional PAC meetings four times per year. Where there are opportunities for friendship and to hear about regional and national  PAC projects from excellent speakers.

Once again we had a very full year

The project has developed and grown in 2017 /18.  Winstanley College have been very accommodating and at every meeting have provided lunch for members and the girls.

Meetings are to continue in 2018 /19 starting with a meeting next month with a new set of girls chosen by the tutors from this year’s Lower Sixth.  the topics over the year will be as follows:

A new venture this year was to attend one of the College Open Day on 8th February 2018.  Six of our members were able to attend.  We were made very welcome by the Principal, Vice Principal, other staff and students.  Our display was much appreciated and the evening went well.  We hope to do this again next year.

The Brick Centre (support for the homeless)

We have continued to support the Brick with donations of food, sleeping bags and of courde Christmas Shoe Boxes.  This year the bought their own sleeping bags and twelve bags of good quality were bought jointly with Wigan Rotary who were our partners in this aspect of the project. It is hoped to further develop our links with the Brick in the future. 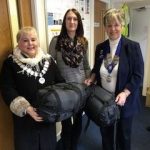 Once again our members have knitted poppies for Remembrance to raise money for the British Legion and members attended the local Armistice Service in Wigan. 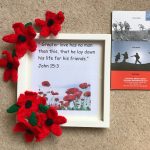 This year we knitted Easter Chicks (and 4 bunnies) most for sale at the Hospice but this year we also sold some  at the March  Regional PAC and Council Meetings in Leigh.  A total of £259.00 was raised. 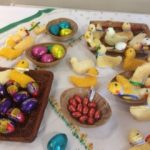 This year the award has been assimilated into the Programme Action Committee.  Once again it was successful with a new flyer and publicity being produced.  This year we decided to a young achiever and runner up.  The winner was Olivia from Winstanley College and the runner up was Olivia from John Rigby, a talented musician who sang at our Annual Ball. The girls received the awards from the Mayor in December.  Members of the Club, and the girls’ parents and friends supported them on this occasion. 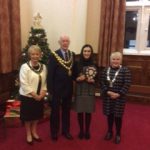 We entered the Regional Rose bowl Challenge this year basing our entry on the Young Achiever Award.

This year has seen changes to the PAC.  Programme action is the main focus of Soroptimist International .  PAC is not just fund raising: it is much more.  It is catering for the needs of women and girls both globally and in our own Wigan Borough.  Every member by becoming a member is signing up to be part of Programme Action.

We are also very keen to continue to support Wigan and Leigh Hospice.  Part of our Hospice support this year will come via our support of Louise and Elaine as they ride their bikes from London to Paris.  They will fly the flag for Soroptimism as they ride.

The Regional PAC meets 4 times a year at Leigh Sports Village.  The meeting is in two halves.  The first half is were visiting speakers come to tell us about various SI projects in the Region, for example Zoe’s Place, (a children’s hospice in Liverpool), FairTrade, Trafficking etc. SI Wigan do well for attenance at the Regional PAC with 6 – 8 members at each meeting, we learn a great deal and always go away informed and enriched.  It is good to meet with friends from all across the Region and realise what a high profile Programme Action has.

After lunch there is Regional council meeting where we hear reports from various members of the SI Council both in this country and internationally.

PAC meetings have been held as a continuation of our Business Meetings this year, this change has been positively received by members.