We started our club meetings in 2022 on Zoom again and were able to introduce 2 new members to the club with everyone gaving a short intro of themselves. This was followed by a quiz from Lin to get the brain cells going.
The following meeting we had a business catchup followed by a self head massage by Gudrun – very relaxing.
Our first speaker of the year was Sian Gwenllian. Sian gave a very interesting talk about her early life, born in Felinheli, attending Bangor Grammar School for Girls and going on to read Geography at Aberystwyth. This is where she first become involved in politics and saw how under-represented women were. Whilst raising her family she managed to fit in being a local councillor working with Finance and Education. At the age of 60, she was elected to the Senedd. She said it was very frustrating being in opposition but, since re-election 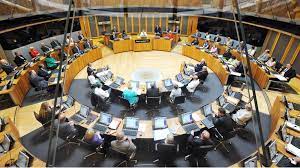 last May with 63% of the Arfon vote, she is now sharing in government with Welsh Labour. She is not a minister, but is designated lead for Plaid Cymru. She said that although the Senedd is more equal than a lot of places with 43% being women, there is still need for reform to make it easier for women to be involved. She hopes she is a role-model for younger women to take an active role in politics.