In honour of the outstanding work that Daphne Whitmore MBE, a former regional honorary member, carried out at Region, a cut glass Rose Bowl is awarded on an biennial basis to the Club that has done the most to fulfil the SI aim of promoting International Goodwill and Understanding.

In 2007, our then president Lynette Richards-Lorde visited Beterverwagting village, in Guyana, South America: 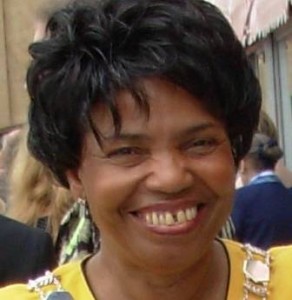 “It was reported to me by the medical officer of health, that children were going to school without breakfast. On investigation, it was confirmed by the teachers that the situation was grim. On return to UK, a Fundraising scheme was set up by S.I Croydon and AGNAP (The Association of Guyanese Nurses and Allied Professionals in the United Kingdom) .  As a result a breakfast club was started at the school. Fifty children were fed. After the first year of the breakfast club, an American charity, “Food for the Poor” took over the running of the breakfast club. In addition to the club, donations of over 4000 fiction and non-fiction school library books were donated by Sedgehill School Library.  A library was then set up at the Beterverwagting School for children and parents. Furthermore, 10 computers were donated by an Inner Wheel member to the school. The children and the parent/teachers of the school were then able to link with the primary school children and their teachers in Beulah school, Thornton Heath using the computers.  The parents and children of Beterverwagting Primary also were given seeds to start their own garden.”