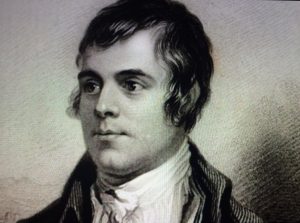 Joint President Elsie Johnston had pleasure in hosting a supper in recognition of Robbie Burns, on his birthday Friday 25thJanuary.  This was held at Wetherby Golf Club and the evening was a great success with members, family and friends in attendance including Soroptimist International of Yorkshire President Pat Kilbane and members from Garforth Elmet Club.
The Presidents were piped in by Dianna Walsh and following the Selkirk Grace by Nicola Harding the haggis, carried by Chef Richard Goodbarn, was piped in and Sue Williams gave the address to the Haggis and the Toast.

This was followed by a delicious supper and the programme continued with readings, poems and toasts to the Lassies and to the Laddies. It was a distinctly feminine entertainment with a lady piper. and all but the Toast to the Lassies, read by Club members. There was plenty of fun and laughter as we learnt more about Robbie’s life. A Lover and Lecher; a Revolutionary and Reactionary as well as a Nationalist and Internationalist. He really was a bit of a jack the lad – immensely popular but died in penury. His songs and poems have left a legacy 260 years after his birth.
This was a very enjoyable evening which ended with Auld Lang Syne, beautifully accompanied on the accordion by Jonathan Hills.
Special thanks to everyone involved in organising and taking part in the event, particularly the staff at Wetherby Golf Club.  We are pleased the event raised over £300 for our Club Charities.

Robbie was an early supporter of women’s rights –  plus ca change!

While Europe’s eye is fix’d on mighty things,
The fate of Empires and the fall of Kings;
While quacks of State must each produce his plan,
And even children lisp the Rights of Man;
Amid this mighty fuss just let me mention,
The Rights of Woman merit some attention. 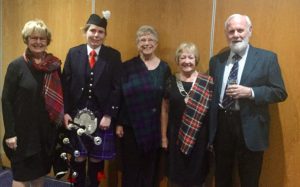 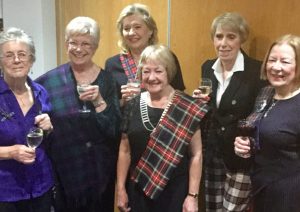