In  2019 Soroptimist International of Harrogate and District Club received an email from journalist Nicky Harley. Nicky’s mission is to increase the number of women recognised by a Blue Plaque by bringing attention to the ‘Forgotten Women’ –  well known during their lifetime but often forgotten since.  One of these women was Dr Kathleen Rutherford MBE. A name well known to the Club as one of the founding members in 1933 and first President but there was little known about the person.

Using the information provided by Nicky, Club member Rachel Richardson’s research revealed a whole lot more. This  includes a Yorkshire Television Calendar programme made in 1970 about her life.  Dr Kathleen, recognised as being a ‘Legend in her own lifetime’  and awarded the MBE, certainly had a great story. She was a sought after Medical Practition in Harrogate.  She was invited by Hitler to a Nuremberg Rally in her bid for peace, she worked in the slums of Naples and in Leper Colonies in Africa as well as helping refugees in Europe and Palestine. Left a legacy by a grateful patient, she gave most of it away to charities in the UK and Africa. Dr Kathleen was made an Honorary Freeman of the Borough of Harrogate.

The Club members certainly thought Dr Kathleen was worthy of  being remembered and approached the Harrogate Civic Society. Encouraged and guided by local historian, Malcolm Neesam, who helped support the nomination.  In March 2020, just before lockdown the Club held an International Women’s Day event attended by Soroptimists from throughout Yorkshire to showcase the incredible story of the Dr Kathleen’s life that Rachel’s diligence had uncovered. This included watching the Yorkshire Calendar TV programme where Dr Kathleen spoke about her life. Special guest Malcolm Neesam spoke about the work of the Civic Society and how they  were keen to increase the number of women recognised for their achievements in Harrogate.

Dr Kathleen was at the forefront of women taking on leading roles in society to improve the lives of the most disadvantaged. This year, more than 45 years since she died,  a Harrogate Civic Society Brown Plaque was unveiled by Club President Sandra Frier at her former home and place of her medical practice at Saint Mungo York Road, Harrogate. We are pleased that the present owners of Saint Mungo, Mr and Mrs Wriglesworth were very happy for the plaque to be mounted on their gate post. Their son Tom, a keen artist once again highlighted the house’s name. Dr Kathleen’s memory deserves to live on; and the Civic Society agreed. She was an impenitent idealist, internationalist, committed Quaker striving to make a difference through raising awareness, advocacy and action.

It is apt that the Club will show the full programme made by Yorkshire Television again at a special zoom event on International Women’s Day. The Club is delighted that this will be attended by Hugo Wharton, Dr Kathleen great nephew;  Edward Kemp,  whose father, Eric Kemp was the Bishop of Chesterfield and treated by Dr Kathleen as a boy when staying in Harrogate. Bishop Kemp remarked about his treatment in his memoirs, ‘Shy, but not retiring’.

The Club is also delighted that Dr Kathleen has been recognised as one amongst over 100 Soroptimsits who have made their mark in their #Whoisshe? campaign. See her biography here.

President Sandra and club members  are grateful to  Nicky Harley for bringing our attention to such a notable woman –  we know there are others out there, lost in time, who also deserve to be remembered’.

We would also like to thank  the Harrogate Civic Society for supporting the application.  A particular thank you also to Richard and Lynn Wriglesworth for giving permission for the plaque to be placed on their gate post. And, to their son Tom for refreshing the Saint Mungo’s name.  This was a real team effort and a great example of partnership working. 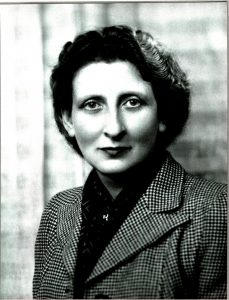 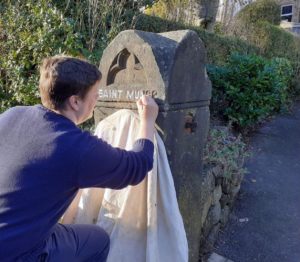 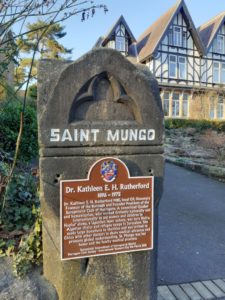 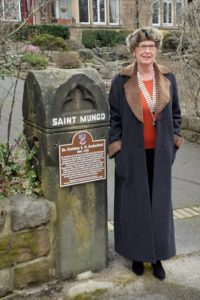 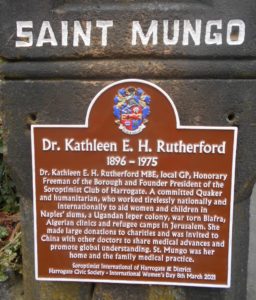 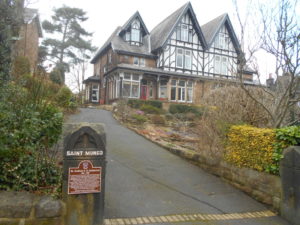 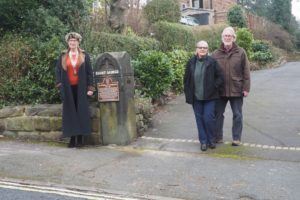