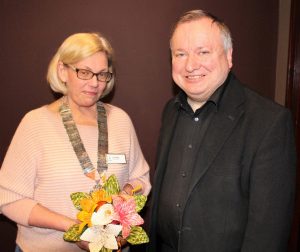 President Kay and Father Brian Gowans
Kay is holding a beautiful flower decoration made entirely from phone books by women prisoners in the Philippines!

President Kay Wilkie introduced Father Brian Gowans, the Parish Priest at St Joseph’s in Burntisland who was asked to speak in his capacity as Chaplains’ Advisor to the Scottish Prison Service and President of the International Commission of Catholic Prison Pastoral Care. Soroptimists have a particular interest in the rehabilitation work done in women’s prisons and in the efforts being made to help prisoners successfully return into the community and avoid going back to prison in the future.

After being asked to temporarily cover for someone at the Young Offender’s Institution Polmont in 1993, Father Brian found that the supply post led him to be involved with working with prisoners (mainly young people) for the next 23 years. In his role with the Scottish Prison Service he has visited all the prisons in Scotland and as International President, many prisons throughout the world.

He explained that women end up in prison for many reasons and some of them have a multitude of problems including mental health issues, addictions and abusive relationships. Looking behind the initial impression many of the women give, there can be someone who has been bullied, neglected by parents, has very low self esteem and whom nobody has taken the time to talk to.

An increasing problem, today, is that some of the women are met by their pimps as they leave the prison gates. The “sex trade” has in many ways become the new “slave trade”  and this often leads to the vicious circle of intimidation, drugs, prostitution and hence a return to prison.

The system of women’s prisons is hopefully changing for the better. It is proposed to knock down Cornton Vale and build a new prison which will house 80 women and other offenders will be housed in the community. Conditions will be better and specialist help will be available from mental health services and social workers amongst others.

Father Brian concluded by saying that if we change the prisons we can perhaps reduce the number of re-offenders and hence the number of victims of crime. Even better – in an ideal world – we would not have to send people to prison because we would have managed to deal with the problems before they led to the need for a prison sentence.