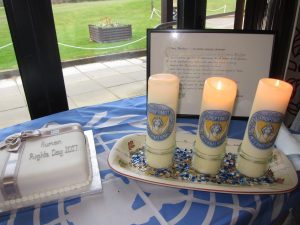 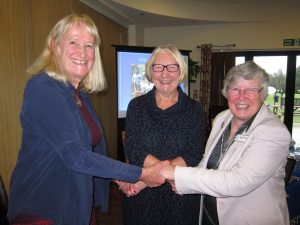 The first speakers of the day were Barbara Conridge and Angela Huddart, Trustees from Yarlswood Befrienders Yarl’s Wood Immigration Removal Centre (IRC) in North Bedfordshire is the main long-term detention facility specifically for women in the UK. Yarlswood Befrienders provide emotional and practical support for the people held in Yarl’s Wood IRC, helping them cope with the challenges of detention.They gave us great insight to the work they do through 50 volunteers (including Pauline Panter from SI Bedford), 3 members of staff and 6 Trustees. We heard that only 46% of the detainees are deported, it costs £300/day/person to detain people and that detention (unlike prison sentences) is indefinite even though many detainees have not committed a crime. Please click her to view the presentation YarlswoodBefriendersPresentationDec2017 Following on from the meeting please see this petition  from Amnesty International: Amnesty Petition which affects the female detainees at Yarl’s Wood. Barbara and Angela said in their talk “indefinite detention is cruel, it does not happen to convicted criminals and the majority of detainees are only guilty of wanting a better life for themselves and their families.” Please add your name to the petition if you would like to support it. NB from after the event – please click here to download a thankyou letter Yarlswood Befrienders Letter They were delighted that the raffle for the origami artwork made by the women raised £194 on the day and they also received an individual donation of £100. Members attending will also be relieved to know that they were successful with the Big Lottery Bid for £384,744 which is 3yrs running costs!

We were served a lovely lunch and a glass of “fizz” as a celebration of HR Day and as a welcome from our new Regional President Margaret to the first meeting she has presided over in the Soroptimist Regional calendar. 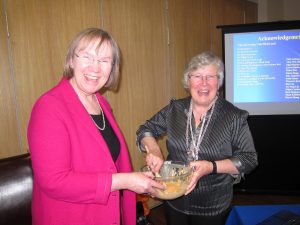 In the afternoon our speaker was Professor Helen Atkinson CBE Pro Vice Chancellor, School of Aerospace, Transport and Manufacturing Cranfield University. She currently has responsibility for an aircraft which she is (quite rightly) very proud of! Helen is also the Chair of the Engineering Talent Project Reference Group at the Royal Academy of Engineering – so we were able to have a valuable Q & A about getting and retaining girls and women in engineering. Her fascinating talk was entitled “Cornflour, Ketchup and Parts for Cars” – she explained how unusual properties like those of cornflour and ketchup can be exploited using metal alloys in a process called thixoforming to make parts for cars, replacement hips and many more useful things. So now we all know about thixotropy and thixoforming! The photo is of Helen and President Margaret with Helen’s experiment demonstration prop – a bowl of cornflour and ketchup mixed with water – and we were all transported delightfully back to school science lessons.

To close the day we all enjoyed a cup of tea or coffee and a delicious slice of celebratory cake. Everyone went home having learnt a lot, enjoyed the company of fellow Soroptimists and guests and shared food and drink – what a great way to spend a Saturday!