on 8th March every year since 1909. The day was adopted by the United Nations in 1975 with an annual identified theme; this year that theme is Think Equal, Build Smart, Innovate for Change.

In the celebration of IWD we had several readings:

The full transcript of all of the readings are at the bottom of this page.

After the readings we lit a Candle to Celebrate the Women of the World. 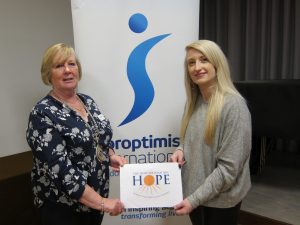 Chloe (pictured here on with Pauline Panter to her left) explained the history and work of the foundation working in Kolkata (India), where it works to free children and families from lives of pain, abuse and poverty. She explained about her work in the UK to both increase awareness and raise vital funds to pay for the services. She highlighted a forthcoming collaborative venture working with Cambridge based charity Street Child United to bring a group of children over to play in a cricket tournament during the summer of 2019 which will include playing at Lords; it is hoped that each child will be sponsored. Chloe’s presentation can be viewed here: HOPE Presentation – Saturday March 9th  There is also an excellent video you can watch by clicking here https://www.youtube.com/watch?v=kqrULFq-Dmc 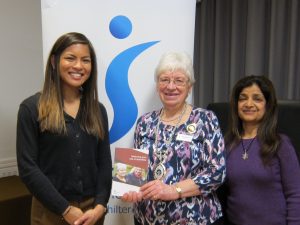 Fundraising Manager & Sukhy Loyal, Community Speaker (in the pic Kat is on the left and Sukhy on the right of Rita Beaumont centre)

We hope to add the presentation materials here soon.

Information for Members of the Clubs in Soroptimist International London Chilterns Region from the business conducted at the meeting was circulated by the Region’s Secretary Rita Beaumont before and after the event. Please contact us if you have not received www.sigbi.org/london-chilterns/contact-us/

The life and work of Edith Smith, Britains first warranted policewoman, has been recognised thanks to a fundraising project to put a headstone on her previously unmarked grave. Edith Smith was born on 21st November 1876 near the centre of Oxton, near Birkenhead, where she grew up, married and had four children. Edith became a midwife when her husband died, before joining the Woman’s Police Volunteers in 1914 when the war broke out. The Woman’s Police Volunteers eventually reformed as the Woman’s Police Service. Edith was posted to Grantham area to assist in the issues including drunkenness, the widespread use of cocaine, prostitution and the subsequent spread of venereal disease. This area of the city was well know for its problems with alcohol and violence. At the time of her posting women officers were expected to carry out actual policing duties with no powers of arrest and unlike the male officers were not paid out of the local rates. In December 1915, after a meeting was held to discuss the progress of the policewoman with Chief Constable Cadbury, he signed Edith Smith’s warrant card and she received the power of arrest, becoming the first full time WPC and her name moved into history. After learning that Edith (who died in 1923) was buried in an unmarked grave, a project to raise money for a headstone to commemorate and raise awareness of her was launched by Merseyside Police Federation Charitable Trust. Money was donated by the public, staff members from a number of police forces and societies and more than £2,500 was raised to provide a headstone and a service to celebrate her life. That was completed in December 2018. Edith contributed a phenomenal amount to policing and her work paved the way for the police officers of today, but especially female officers. As well as her police work she travelled throughout Britain, giving talks, writing books and campaigning about woman’s policing. Despite all of this and her unique place in British history it was hard to discover that Edith’s grave remained unmarked. Taken from an article Published in the National Association of Retired Police Officers (NARPO) magazine in February 2019

Joan Clarke’s ingenious work as a codebreaker during WW2 saved countless lives, and her talents were formidable enough to command the respect of some of the greatest minds of the 20th Century, despite the sexism of the time. But while Bletchley Park hero Alan Turing has now been treated kindly by history, the same cannot yet be said for Clarke.

The only woman to work in the nerve centre of the quest to crack German Enigma ciphers, Clarke rose to deputy head of Hut 8, and would be its longest-serving member. She was also Turing’s lifelong friend and confidante and, briefly

In 1939, Clarke was recruited into the Government Code and Cypher School by one of her supervisors at Cambridge, where she gained a double first in mathematics, although she was prevented from receiving a full degree, which women were denied until 1948. As was typical for girls at Bletchley, (and they were universally referred to as girls, not women) Clarke was initially assigned clerical work, and paid just £2 a week – significantly less than her male counterparts.

Within a few days, however, her abilities shone through, and an extra table was installed for her in the small room within Hut 8 occupied by Turing and a couple of others .In order to be paid for her promotion, Clarke needed to be classed as a linguist, as Civil Service bureaucracy had no protocols in place for a senior female cryptanalyst. She would later take great pleasure in filling in forms with the line: “grade: linguist, languages: none”.

The navy ciphers decoded by Clarke and her colleagues were much harder to break than other German messages, and largely related to U-boats that were hunting down Allied ships carrying troops and supplies from the US to Europe, Her task was to break these ciphers in real time, one of the most high-pressure jobs at Bletchley, according to Michael Smith, author of several books on the Enigma project. The messages Clarke decoded would result in some military action being taken almost immediately, Mr Smith explains. U-boats would then either be sunk or circumnavigated, saving thousands of lives.

Because of the secrecy that still surrounds events at Bletchley Park, the full extent of Clarke’s achievements remains unknown.

Although she was appointed MBE in 1947 for her work during WW2, Clarke, who died in 1996, never sought the spotlight, and rarely contributed to accounts of the Enigma project.

Gender equality and women’s rights are fundamental to global progress on peace and security, human rights and sustainable development. We can only re-establish trust in institutions, rebuild global solidarity and reap the benefits of diverse perspectives by challenging historic injustices and promoting the rights and dignity of all.

In recent decades, we have seen remarkable progress on women’s rights and leadership in some areas. But these gains are far from complete or consistent – and they have already sparked a troubling backlash from an entrenched patriarchy.

Gender equality is fundamentally a question of power. We live in a male-dominated world with a male-dominated culture. Only when we see women’s rights as our common objective, a route to change that benefits everyone, will we begin to shift the balance.

Increasing the number of women decision-makers is fundamental. At the United Nations, I have made this a personal and urgent priority. We now have gender parity among those who lead our teams around the world, and the highest-ever numbers of women in senior management. We will continue to build on this progress.

But women still face major obstacles in accessing and exercising power. As the World Bank found, just six economies give women and men equal legal rights in areas that affect their work. And if current trends continue, it will take 170 years to close the economic gender gap.

Nationalist, populist and austerity agendas add to gender inequality with policies that curtail women’s rights and cut social services. In some countries, while homicide rates overall are decreasing, femicide rates are rising. In others we see a rollback of legal protection against domestic violence or female genital mutilation. We know women’s participation makes peace agreements more durable, but even governments that are vocal advocates fail to back their words with action. The use of sexual violence as a tactic in conflict continues to traumatize individuals and entire societies.

Against this backdrop, we need to redouble our efforts to protect and promote women’s rights, dignity and leadership. We must not give ground that has been won over decades and we must push for wholesale, rapid and radical change.

This year’s theme for International Women’s Day, “Think Equal, Build Smart, Innovate for Change”, addresses infrastructure, systems and frameworks that have been constructed largely in line with a male-defined culture. We need to find innovative ways of reimagining and rebuilding our world so that it works for everyone. Women decision-makers in areas like urban design, transport and public services can increase women’s access, prevent harassment and violence, and improve everyone’s quality of life.

This applies equally to the digital future that is already upon us. Innovation and technology reflect the people who make them. The underrepresentation and lack of retention of women in the fields of science, technology, engineering, mathematics and design should be a cause of concern to all.

Last month, in Ethiopia, I spent time with African Girls Can Code, an initiative that is helping to bridge the digital gender divide and train the tech leaders of tomorrow. I was delighted to see the energy and enthusiasm these girls brought to their projects. Programmes like this not only develop skills; they challenge stereotypes that limit girls’ ambitions and dreams.

On this International Women’s Day, let’s make sure women and girls can shape the policies, services and infrastructure that impact all our lives. And let’s support women and girls who are breaking down barriers to create a better world for everyone.