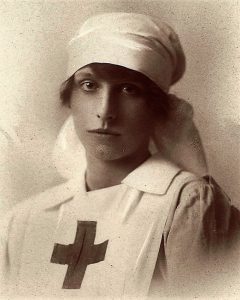 Beatrice Alice Wilson, known as Bea within the family, was born on 23 September 1896 in Chislehurst, Kent, to Sidney John and Helen Wilson. She had two older sisters, Marjorie and Stella, an older brother, Robert Percy, and a younger brother, John.

The family lived at the Briars in Chislehurst until about 1912 and then moved to Birkby, Westgate Road, Beckenham, after family financial problems. She was educated at the Coed Bel School in Chislehurst.

During WWI she served as a nurse with the Red Cross, firstly at the Auxiliary Military Hospital in Sundridge and then at the Royal Naval Auxiliary Hospital in Truro, Cornwall in early 1917. (Her parents had moved to Rockside, Flushing because of her father’s health). After Sydney John’s death in late 1917, the family moved to Prospect House in Sundridge, later known as The White House, to be near Helen’s family. Bea and her siblings had been frequent visitors to their grandfather, Robert Robinson Drabble’s, house at Woodside, Sundridge, during her childhood.

She trained as a physiotherapist at Guy’s Hospital, one of the first women in this new medical profession. This involved practice in the East End of London. She became Sister in Charge of Massage and then Superintendent of the Physio Dept. at the Royal Portsmouth Hospital for two years. She than became a physiotherapist and Dietician at the Anglo-American Hospital in Rome.

From 1930-32 she appears to have lived at the Red House in Sundridge, home of her aunt, Elizabeth Polhill-Drabble, then at 64 Granville Road in Sevenoaks from 1932-5, opening private treatment rooms in ‘a hut in the garden’. She then lived at 42 Granville Road from 1935-1939, with her mother, until Helen’s death.

The Clinic moved to new purpose-built premises in South Park in 1938 and provided oupatient services. She was elected to the Council of the Chartered Society of Physiotherapists from 1939-42.

During WW2 she was Command Adviser in Physiotherapy to the Middle Eastern Forces from July 1942-November 1943, based in Palestine, and part of the Royal Army Medical Corps. A report in the Sevenoaks News of Jan 23rd, 1980, states that she was attached to the ‘First Scottish Regiment’, which may have been a reference to the Royal Scots Guards. It also includes a story about getting a lift from a man from Knockholt in Kent to Damascus to treat a wounded soldier. She was awarded the Africa Star medal, like all those who served in that arena of conflict.

She may also have worked in Cairo with the Queen Alexandria’s Royal Nursing Corps and she held several badges from the Red Cross. It is not clear when she returned to England, but she treated Winston Churchill at Chartwell during this period.

By 1949 the Clinic was treating over 700 patients and was known for its innovative work. A royal visit by Queen Mary in 1938 attracted crowds of over two thousand people. Beatrice lived in a flat called The Yellow Balcony, which was an integral part of the building. A second storey was added to the Vitasan in 1953, which enabled the clinic to treat 50,000 patients a year. She was elected to the Council of the CSP in 1945, 1949 and 1954, chairing the Physiotherapy Services Committee for seven years, and being on numerous sub committees. Through the Council she attended international conferences in New York, the USA and Canada in 1953. She also established a local branch in Sevenoaks.

In 1938, she became one of the founder members of the Sevenoaks branch of the Soroptimist Club, which had opened its British section in 1934. n 1941 Beatrice was elected President of the Sevenoaks branch. As well as the regular meetings, a Bring and Buy was held at the Vitasan Clinic, where among the attractions, Beatrice herself was running an auction. Funds collected that year were sent to the Lord Mayor’s Relief Fund and a new flag for the local AFC. The Soroptimists were later critical in fundraising for Rockdale and in practical work converting the new home.

In 1946 she was an adviser to the Sevenoaks Orthopaedic Clinic and Holmedsdale Hospital, both later to become Sevenoaks Hospital.

In 1948 she established the Sevenoaks and District Old People’s Housing Association, later named the Rockdale Housing Association. After an extensive fund-raising campaign, she acquired Rockdale House (former home of the Laurie family) in Rockdale Road in 1951 and this opened as a pioneering old people’s home in 1953. The guiding concept behind Rockdale was that it would provide affordable accommodation for older residents with varying needs, from full supported independence to a more substantial degree of care. Beatrice continued to fund raise tirelessly for Rockdale. Rockdale has remained a non- profit-making organisation, supported by fund-raising. The annual Summer garden fetes, held on the many levels of the Rockdale gardens, were a highlight of the Sevenoaks calendar, while Autumn fairs were held in the Cornwall Hall. Beatrice also maintained a strong personal interest in Rockdale residents, visiting each one with a card and small gift at Christmas, often accompanied by her little niece, Margaret. Since then, Rockdale has gone on from strength to strength, opening accommodation to suit the needs of the elderly of Sevenoaks. In 1985 a new block of flats, accommodating 50 residents, was named after her.

In the 1950 and 1960s she travelled to India and Russia to talk about her work as a physiotherapist, probably with the Soroptimists.

She was particularly close to her brother, Percy, who had founded Winchester House School, a preparatory school in Sevenoaks in 1938. Percy had married in 1948 and had three children. She was a frequent visitor to their home and went on family holidays together.  Despite her rather severe professional reputation, she was known as a ‘fun aunt’ within the family, outracing her nephews and nieces in their early years, and hosting an annual get-together for her wider family at the Yellow Balcony.

Somewhat to her family’s surprise, she married her childhood sweetheart, Dr. Laurence Lockhart, a Fellow of Pembroke College, Cambridge, in September 1963 at Pembroke College and at the age of 67.

She had sold the Vitasan Clinic to the NHS in 1964 but remained on the committee of Rockdale for many years. Beatrice and Laurence lived in Wilberforce Road, Cambridge, for several years and then built Cedarwood House in Barrington in Cambridgeshire. In Cambridge, they led an active life, enjoying Laurence’s academic connections with Pembroke and with what is now the Faculty of Asian and Middle Eastern Studies, until his death in 1974.

Beatrice died in St Andrew’s Hospital, Northampton, 1980 at the age of 84, having suffered from dementia. To respect her long contribution to Sevenoaks, she is buried in Greatness Park Cemetery in Sevenoaks.