Where it all began…

We probably have the First World War to thank for the birth of Soroptimism.  During this conflict, women for the first time had to take key jobs, many entering the professions or running family businesses.  By 1920 women were holding positions of importance, gaining degrees from university, and meeting each other in a professional capacity, not just socially.

Journalist, Ethel Parr, reported on the formation of a new Rotary Club in Bristol and suggested that a similar women’s club be formed.  As a result, the first Venture Club was formed in Bristol in 1920 with objectives similar to Soroptimists today.  Around this time, Quota Clubs were being formed in Australia and New Zealand.

Soroptimism continued to grow and in 1928 the Federations of America and Europe were formed as the International Association.

In the UK Soroptimist and Venture Clubs merged in 1930, adopting the Soroptimist name and retaining the Venture Clubs’ motto “Looking Further”.  Our Federation, Soroptimist International of Great Britain & Ireland (SIGBI) was formed in 1934.

In 1937, the first Australian Soroptimist Club was chartered in Sydney, from the Quota Club.

The Second World War led to many more clubs being chartered. The United Nations, which was to be hugely influential to Soroptimist thinking, was created in 1945 to prevent war, maintain international peace and security, promote social progress and better standards of life through friendly international co-operation.

In the immediate post-war years, there was a great need for Soroptimist service, and the number of UK clubs increased from 58 in 1938 to 120 in 1946.  Many European Clubs, forced to close during the war, were beginning to re-open too.

Members may be interested to know the origin and meaning of the regalia worn by our Region President. 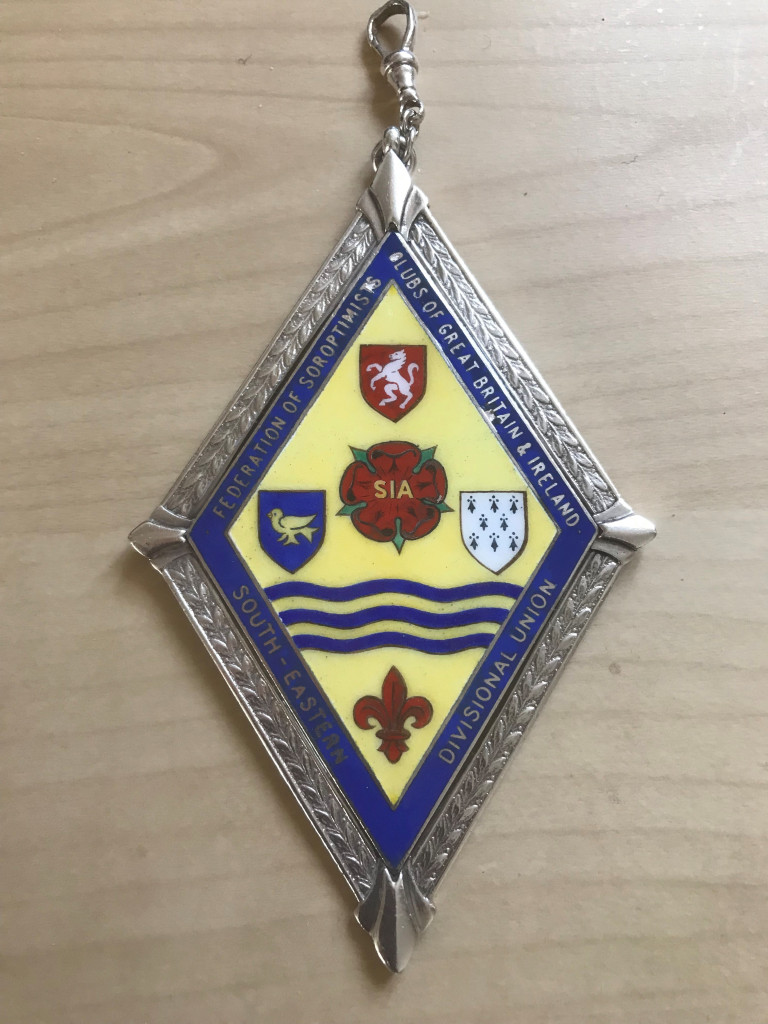 The insignia comprises a 40-bar silver collar, with a Tudor rose and white rose on the collar, from which hangs a silver lozenge.  The design is a diamond (lozenge) shape because a woman, in heraldry, bears her arms upon a lozenge and not upon a shield.

The inscription reads “Federation of Soroptimist Clubs of Great Britain and Ireland, South Eastern Divisional Union”.  The three devices on the small shields shown on the lozenge, and the Tudor rose, and the red fleur-de-lis, are taken from the coats of arms of the counties from which the division drew its membership at the date of its foundation in January 1958:

The white horse of Kent

The martlets from East and West Sussex

The ermine from Surrey

The Tudor rose from Hampshire

The fleur-de-lis from Dorset

The Tudor rose carries the initials S.I.A., standing for the Soroptimist International Association.  The three blue lines represent the water that surrounds the area of the Division – the Thames Estuary, the North Sea and the English Channel.  For the purposes of the design, one symbol had to take precedence by being placed at the apex of the lozenge and the honour went to the Kentish horse, Invicta, since the first president of the new Divisional Union in 1958, Miss Diana MacDonald, was from Medway in Kent.  Miss MacDonald designed the insignia, and it was made by Highley’s of Chatham, Kent in 1959.

When the Divisional Union split in 1966 to form the Southern and South East Regions, it was agreed that the regalia would stay in our region.

In 2019 the Region celebrated their Diamond Anniversary with a lunch at Tenterden attended by Sue Williams, Federation President along with many past and present members.

A presentation was shown reflecting on past Regional Presidents.

Region Home
Region News
Regional Officers
Our clubs
What we do?
Membership
Safeguarding is Everyone’s Responsibility
Where it all began…
SISEE Region Calendar
SI South East England Newsletters
Contact Us