During our Club Year 2020/2021 we had members who were due to receive Long Service Certificates. Unfortunately, we were unable to present these due to the pandemic. It has now been possible to put this right, due to the slight relaxation of restrictions.

Immediate Past President Lyn presented Betty Bates and Susan Powell with their certificates and some flowers.

Both members have served 35 years as valued members of SI Tamworth.

Three members of SI Tamworth were surprised at our March Business meeting to receive their 30 years long service awards. 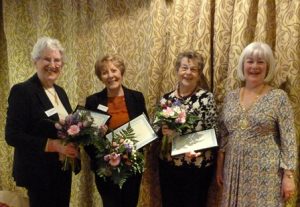 President Christine Arrowsmith presented the awards to dedicated Soroptimists Brenda Frankham, Maureen Turfrey and Margaret Walters who had been kept in the dark about the occasion. 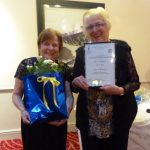 Viv was, as she said herself, “absolutely stunned” when it was announced. It had been a very well-kept secret

Viv is a superb Soroptimist, always showing great enthusiasm and dedication to the work of the club and the whole Soroptimist movement.

She became a member in 1982 and served as President 1992 –1993. She has held various other posts, particularly in Programme Action where she has brought so many causes to club over many years and her commitment and motivation are an inspiration to all. Viv enjoys her work and always displays a great sense of humour.

Viv has always taken a great interest in Soroptimist regional matters and was Midland Chase Regional President in 2003 – 2004 and has also served for 4 years as Regional Councillor.

Gwyneth has served 25 years as a valued member of SI Tamworth, both as President in the 1999/2000 year and has also worked for the last 20 years as Communications Officer.

At our June business meeting Joan Twomlow received her award for 30 years as a Soroptimist.

She was very surprised but very delighted. The lovely flowers were arranged by Vicky Vernon.

Vera McDonald and Joan Morris were very surprised and delighted when they were presented with their long service certificates by President Chris Fulwell.

Joan has completed 40 years as a Soroptimist and Vera 30 years.

In October Iris Shuttleworth was presented with a long service award for 50 years.

In October Cresta Garner received her certificate celebrating 30 years as a Soroptimist, firstly with the Cannock club and now Tamworth.
President Gillian Pallett presented her with a framed certificate and a gift of flowers to celebrate her achievement
Cresta thanked members and said how delighted and happy she was to be a member of the club. 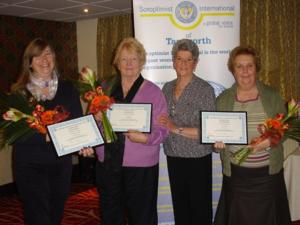 At our January business meeting President Jackie Edwards presented long service awards to three members. Vivian Khan and Jenny White received 30 year awards and Debbie Hardman Wilson a 25 year award. Debbie is the third generation of her family to be a Soroptimist.

Vera MacDonald received her certificate celebrating 25 years as a Soroptimist. 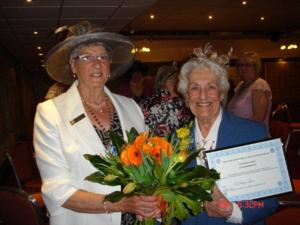 Anne North received her certificate celebrating 25 years as a Soroptimist. 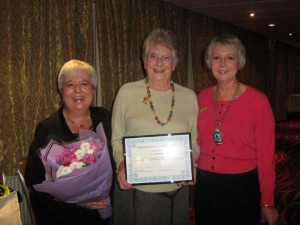 Gwen Hutchinson received her certificate celebrating 45 years as a Soroptimist. 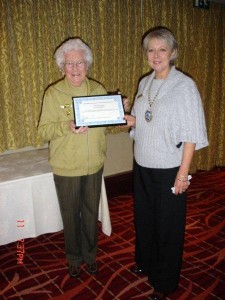 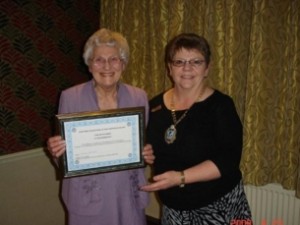