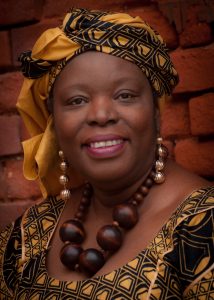 As part of this year’s celebration to mark the centenary of women first achieving the vote in Britain, The National Trust is not only commemorating the lives of powerful historical women. It is also telling the story of inspirational women working in the community today.

SI Thames Valley nominated our member Rose Simbo for her work setting up the Kori Charity in Sierra Leone, to which many Soroptimists throughout the country have sent contributions of donations of all kinds.

At a special meeting in February 2018 in the Orangerie at the National Trust’s Cliveden in Taplow, Berkshire the nominees were invited to speak about their achievements. These nominees were very varied; from founders of new charities, of mental health groups, from marathon runners to one woman who had rowed around England for charity. Each gave a short speech on her work.

Members of SI Thames Valley, who were there to support Rose, were delighted to have a special publicity spot in Rose’s speech as she highlighted how Soroptimists rally round to support her whenever they can. The meeting ended with a torchlight walk through the grounds to see an exhibition which will is now to the general public featuring all the nominees involved  until July 13, 2018. It was indeed an inspirational evening.

In July 2016 we heard that Soroptimist International has released a report on achieving gender equality through sustainable development as its input to the UN High Level Political Forum on Sustainable Development.   This report includes full details of the Kori Women’s Development Project.

SI’s report is available on www.soroptimistinternational.org, at the foot of the page click on Global Perspctives on Implementing Sustainable Development.

Or visit https://sustainabledevelopment.un.org/hlpf/inputs    Click on Major Groups and Other Stakeholders, then scroll down to Soroptimist International.   A box in the top right hand corner shows 2 documents:  executive summary and full report. 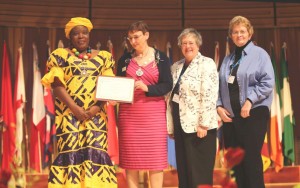 At the Federation conference in Gateshead in 2013, SI Thames Valley were delighted to receive three Programme Action awards:  for Economic Empowerment, for Violence & Conflict Resolution, and as overall winner of the SIGBI Programme Award.

At conference in Harrogate in 2014, Rose Moriba, Johanna Raffan and Gill Curry were invited to give an update.    They highlighted the problems of their on-going Kori Women’s Development Project in Taiama.  Founded by a current member of SI Thames Valley, this successful project aims to empower and educate women and girls in the Kori District of Sierra Leone by helping them cultivate land, grow crops, have the chance to take out micro-loans and also to build a library.  Unfortunately the village of Taiama, the home village of founder member Rose, has been caught up in the EBOLA crisis. 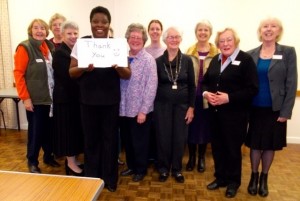 At Harrogate we were given special permission to do a bucket collection for our Kori Women’s Development Project to fund transport of essential items to Sierra Leone. We were overwhelmed by the generous response of Soroptimists at conference who raised over £8000, covering the cost of sewnding two shipping containers.. Apart from the obvious effects of the epidemic – the sickness and death of many people in our area – we had also learned that due to the prohibition on gathering in groups and shops people were unable to get food, were too weak to farm and many children were left as orphans.

People were dying of famine as well as from Ebola. A local businessman had given us a ton of rice so we were able to use some of the money donated by Soroptimists to get this rice out quickly to the needy in our area of Sierra Leone. We paid to have it distributed to the old and very young in our area and the local people were immensely grateful. They have asked that we thank you.

We will continue to inform you of what we are achieving with your money.  So thank you Soroptimists!

During 2015 SI Thames Valley have continued to receive donations of money, clothing, books and other goods from other Soroptimist clubs and regions, and from other organisations – many thanks to all who have contributed.

For more information about this project click on KWDP