Woking Soroptimists past and present

Some of the Soroptimists in our Club who left their mark on their community and beyond.

Anne was elected Mayor of Woking in 1989.  During her term as Mayor she set up Woking Shopmibility, as her mayoral charity and chaired the Elderly Services and Grants Committees, in addition to a heavy programme of mayoral duties. Anne then became extremely active in the voluntary sector, continuing her involvement in Shopmobility, but also joining the Woking Association of Voluntary Service.  Woking recognised her many achievements in 2010 when she  – the first woman! – was made an Honorary Freeman of the Borough of Woking in recognition of her service to the Voluntary Sector.  Today, Anne supports many charities.  One is Woking Community Transport: she has supported this since it began in 1991 and is still a Board member.  Another is Woking Food Bank, whose work was more vital than ever during the 2020/21 pandemic.

In addition to her many other interests and activities, Anne has been a very active member of SI Woking & District since 1996. Having served as President of SIWD in 2000/1 (with the theme ‘Access through the Millennium’) and in 2008/9, she served as SI Southern England Regional President in 2010/11.  Anne also often represents SIWD within the local community.  We are particularly proud of the fact that Anne led SI Woking to organise Woking’s first “Women’s Health Matters” Health Fair in 2009 and 2011.

Dr Mary Baker MBE was a member and later honorary member of SI Woking and District for many years until demands of her professional work prevented full engagement.  She was President in 1985-6 and also held the post of club treasurer.  Dr Baker remains a supporter and friend to members.

In her work in Woking, Mary was successful in helping patients get good all-round support after diagnosis.  Amongst her many important professional roles, she has chaired the Working Group on Parkinson’s Disease, formed by the World Health Organization and was also President of the European Brain Council.  Mary has received awards including the prestigious British Neuroscience Association Award. 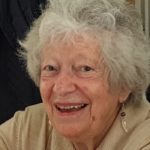 Audrey Taylor is a Chartered Physiotherapist. After training and working at Kings College Hospital, she began working locally.  Rowley Bristol Orthopaedic Hospital, St Peter’s Hospital and Botleys Park Hospital – and private patients – all benefited from her expertise and experience over many years.

Audrey is a long-standing member of Soroptimist International. She has held posts at local, regional and national level.    She was President on two occasions (1988-9 and 2001-2) and is currently our Membership Officer. In 1995-6, she was President of SI Southern Region and oversaw the celebrations for the 75th anniversary of Soroptimist International.  At national level, she served on the board of the SIGBI Benevolent Fund.

During her long years of membership of SI Woking, Audrey has contributed to many community support activities. Together with a sister club member, the late Joan Everett, she was instrumental in founding the Woking branch of The Osteoporosis Society. Our Club subsequently raised funds to help St Peter’s Hospital to get its first Bone Density (DEXA) Scanner.  And Your Sanctuary (Surrey Women’s Aid) knows her well because for ten years, and until recently, she was one of their Trustees.

We are lucky indeed to have Audrey as a member. She unfailingly inspires all of us with her knowledge and enthusiasm.

Ann Sweeney (1944-2019) was a historian who lectured all over the world.  She was a respected lecturer for WEA, NADFAS, Chair of the Pepys Club and a member of the Court of the Worshipful Company of Fletchers Livery.  Most proudly, Ann was Chair of Hillcroft College (now part of Richmond Adult Community College), which provides a supportive environment for women who want a second chance in education. She was awarded an MBE for services to Adult Education in 2002.

Ann joined our Woking Club in 1983 and remained an active member for 24 years.  She was President in 1991-2 and in 2003-5.  In addition, she was a Regional and Federation officer. Ann was extremely generous with her time, especially for events and initiatives that furthered Soroptimist aims. She was also very willing to offer her home and garden as a venue for events.

Ann Sweeney loved people and loved learning.  she was interested and interesting, warmly and generously encouraging. She was a woman who enabled others to find enthusiasm for the richness of life.