Welcome to the website of Soroptimist International, Ashton-under-Lyne, one of 15 clubs in the South-Lancashire Region of the Federation of Great Britain and Ireland

We are a thriving club which was chartered in 1943, and we proudly uphold the Soroptimist ideals of service to the community at local, national and international levels; high ethical standards and human rights for all. We are passionate about advancing the cause of women throughout the world.

The club currently meets at 6.45pm twice a month (Except August) on the 1st and 3rd Monday of each month and our meetings are held at Audenshaw Masonic Hall, Manchester Road, Audenshaw M34 5GB. SI Ashton-under-Lyne is a very friendly club and offers a warm welcome to all our visitors and prospective new members. 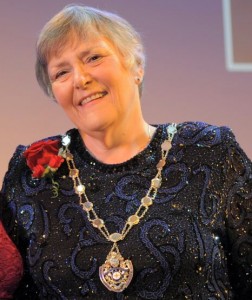 Dr Margaret Emsley, a long standing member of SI Ashton-under-Lyne, has completed her year as the Federation President pf SIGBI and in recognition of the service she has given has been made an honorary member of our Club, Ashton-under-Lyne and also of South Lancashire Region.

President Janette presents a bouquet of flowers to Mildred Smith who celebrates her 90th Birthday on 27th June.
Mildred of course shares her birth year with another very special lady – Her Majesty the Queen.

Sharman Birtles, a club member was installed as the High Sherriff of Greater Manchester on 16th April 2015. This prestigious appointment is made by Her Majesty The Queen as Duke of Lancaster. Sharman is only the 8th Female to be appointed since the office originated in 1974.

Congratulations on a very successful year of Office Sharman. We hope that you have many happy memories to look back on from your year of office. 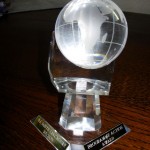 SI Ashton-under-Lyne are proud to be the winners of the South Lancashire Region, Programme Action Trophy for 2014-15. This has been won for the project the club has undertaken in conjunction with Manchester Credit Union to educate primary and secondary schools on monetary issues. More information on this scheme can be found on our Projects Page. 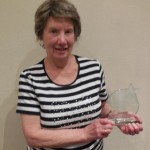 In 2014 the Borough of Tameside honoured Ashton-under-Lyne club member Barbara Thompson for all the years of Voluntary work she has done with the League of Friends at Tameside Hospital. The award is a Pride of Tameside for “outstanding contribution” and the club are very proud of Barbara who fully deserves this recognition.

Barbara very sadly passed away following along illness in September 2016.