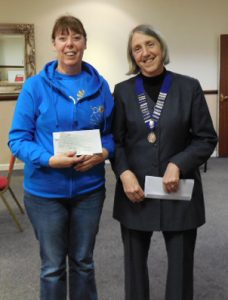 At our Annual Charity Giving for 2017, President Janette Meadowcroft was delighted to hand over a cheque for £2680 to her chosen charity of the year, which has been Rueben’s Retreat and this was accepted by Jacqui Hibbert on behalf of the charity.

Rueben’s Retreat is a place to relax, recharge, remember and rebuild in the beautiful countryside around Glossop in Derbyshire. The charity was formed in memory of Rueben who was only 23 months old when he died from a cancerous brain tumor. The care and support that Rueben’s parents received during his short life inspired them to start the charity which enables families who have a child with a life limiting or life threatening illness the chance to relax and rebuild in peaceful surroundings. It can also act as a bereavement centre. 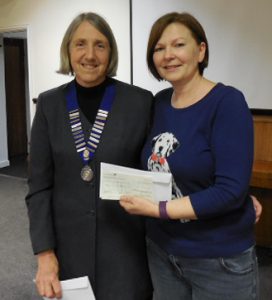 A cheque for £50 from clubs funds was also presented to The Anthony Seddon Fund. Donna Thomas received the cheque on behalf of the charity from President Janette.

This is a small mental health charity, passionate about helping local people who are living with mental illness and its effects. They aim to advance awareness and educate the general public, in particular children and young people, in all areas relating to mental health and well-being. They also wish to improve the quality of life of people affected by mental health issues, their families, friends and carers, in Tameside and surround areas by promoting and protecting their physical and mental health through support, education, practical advice and provisions of financial assistance.

The work is conducted alongside a wide variety of other organisations and agencies, to help them meet these objectives. the charity is run entirely by volunteers, the majority of whom have experience of mental illness, or are actively caring for someone who has.

The charity shop and well-being centre is based centrally in Ashton-under-Lyne.