As part of our 60th Anniversary celebrations SI Canterbury held a competition to highlight the exceptional achievements of women during this difficult time and to bring them to public attention.

Nominations for the most inspirational woman were received from friends, partner organisations and colleagues and on June 19th the winner was announced by Anne Dekker, Sheriff of Canterbury.

The announcement came during a zoom event for finalists, Soroptimists and guests. We are delighted to announce that our Inspirational Woman of Canterbury 2021 is: 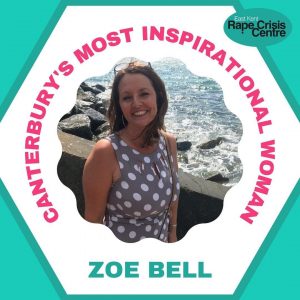 Zoe Bell, Director of East Kent Rape Crisis Centre (EKRCC), which supports women survivors of sexual violence. Zoe’s outstanding professional and personal commitment to helping women has gained her the admiration of her colleagues and the people she serves.

Zoe has ensured there is funding for the wide ranging services that EKRCC offers as well as delivering services herself.

The choice of a winner was extremely difficult as the seven women shortlisted were all exceptional. They included:

Lisa Carlson, Chief Executive of Canterbury Business Improvement District, nominated for her promotion of the United Nations Sustainable Development Goals, as well as her business activities.

Caroline Potts, who is an inspiration to the Wincheap community and the Worthgate Scouts. Caroline supports her local community as a highly effective leader, enabler and fund raiser.

Natalie Mbunga who volunteers for many organisations supporting ethnic minorities in Canterbury, as well as founding Clarence’s Workshops. She was instrumental in providing Tablets for school children during lockdown.

Lucy Mummery, who has worked on the frontline of the NHS, working in an Intensive Therapy Unit for the last 14 months despite her own illness, nursing patients and inspiring her fellow workers by her empathy and dedication

Bishop Rose Hudson-Wilkin who has been a leading activist for social change and and has worked tirelessly for the common good of all people.

Fran Pike, a fitness instructor for her work promoting the health and fitness of thousands of families at the Kingsmead Leisure Centre, her motivation of her colleagues and her support of many local charities.

Soroptimist International of Canterbury would like to extend their thanks to everyone who took part in this competition which has shown how exceptional the women of Canterbury are. There will be a reception, at the invitation of the Sheriff Anne Dekker, at Tower House on 1 August for all finalists.