SI Canterbury is involved in many projects locally, nationally and globally. Projects need to meet our criteria of one or more five identified areas.

Nationally we engage in lobbying and advocacy work around all women’s issues including Forced Marriage, FGM, Human Trafficking and Reducing Women’s imprisonment and support charities such as Target Ovarian Cancer.

Internationally we support Save the Children, Amnesty International  and contribute to emergency support funds.

Follow the link to read our Annual Reviews of Programme Action:

Homelessness in Canterbury ~ We practically support Catching Lives which is an independent charity aimed at supporting the rough sleepers, homeless and vulnerably housed in Canterbury and East Kent; those who have, for many reasons, fallen through the gaps in society and feel they have nowhere else to turn.

Lobbying  We lobby our local MP, Ministers and overseas governments on a wide range of issues related to the well being, equality and rights of women.

Partnerships with the local branches of Amnesty International and Save the Children.  We support their events and campaigns.

Lend with Care ~ we make small loans to entrepreneurs in developing countries and help them work their way out of poverty.

We began supporting this project based in Meru, Kenya in 2014. The following year it was selected as the 2016-19 Federation, at the SIGBI conference in Glasgow.

Our MWGP team had a successful three years raising over £13,000 through events such as, an ABBA Tribute Concert at the Marlowe Theatre, barn dances, Pamper Days, International Women’s Day Dinners and other small events. The project was also selected as a Canterbury Cathedral’s charity in 2017 with funds raised at their Open Garden event.

As the Federation Project, clubs across our region and federation raised in excess of £150,000 making a huge difference to the work of  CIFORD (Community Initiatives for Rural Development)  the community-based organisation that mobilises and supports their community to help improve lives through rural development and social education.

Following the end of the MWGP in 2019 we continue to support the women of Meru through CIFORD and SI Meru.

The team donate Christmas gifts to the residents of the Canterbury Refuge and hope to renew practical support for the women and children in that refuge.  Support hasalso been offered to Oasis who run the women’s refuge in Dover. 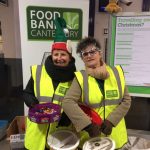 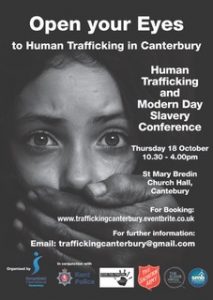 We organised our first Awareness Raising Event in Canterbury in October 2016 and this was repeated in October 2017. During this event we talked to members of the public and highlighted the issue locally.

The team planned and held a successful Conference in October 2018 and  launched a ‘lorry sticker’ campaign to raise awareness of this tragic issue in partnership with John Shirley, International Freight Forwarder, and the charity, ‘Unseen’.

Programme Action and Fundraising is such fun! 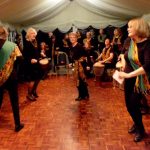 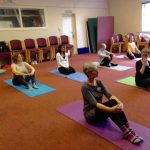 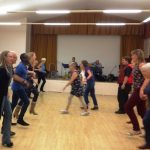 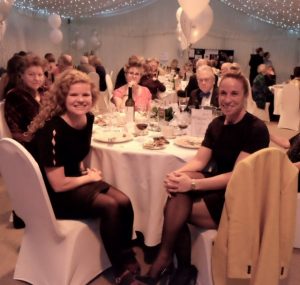 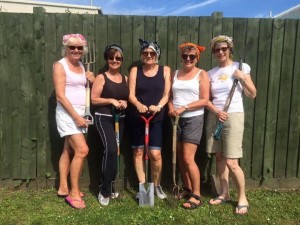 IF YOU HAVE A CAUSE DEAR TO YOUR HEART,  CONSIDER BECOMING A MEMBER OF SI CANTERBURY.

YOU COULD MAKE YOUR DREAM A REALITY  – WE DID! 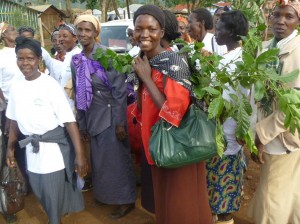 After learning about this project in 2014, we were excited by its potential to change lives in one of the poorest regions of rural Kenya. We were drawn to the proactive nature of a project in which women and girls are supported and given the tools to help themselves.

We were also impressed by how closely it mirrors our own Soroptimist values, goals and vision.

We have supported the project since then and were delighted when it was selected as the SIGBI Federation Project 2016-19. 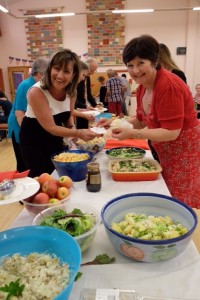 Work for this has already begun with several fund-raising events and a talk by the charity staff. 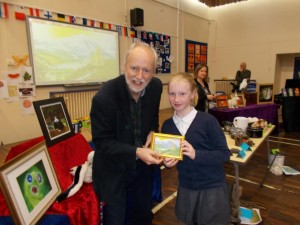 Every year SI Canterbury recognises this event  and this year was no exception. We were pleased to support Jasper Cooper, local author and illustrator run a workshop at  Parkside Primary School, Canterbury. 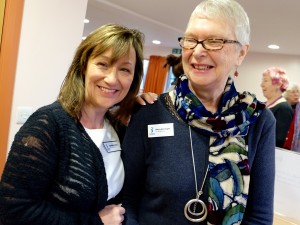 Following on from our work compiling the report for the RWI club members were motivated by the women they met to undertake in service provision. Members have been supporting the post-conviction group running in Thanet and hope to offer the same support to probation teams in Canterbury. 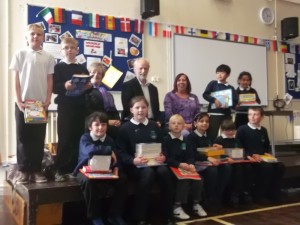 With the theme Encouraging primary Literacy, the club investigated ways of achieving this goal. We identified a primary school in our area and offered our services. We ran a pilot story-telling club for one term and fund raised for prizes for a writing competition set by the school. We aim to continue supporting this school further with other identified activities. 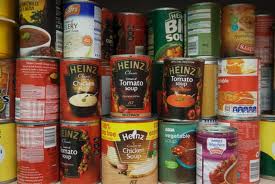 After an exceptional talk from Chrissie Barr it was agreed SI Canterbury would support the Bank. Members supplied tins and/or dried food stuffs with at least 3months shelf life bringing them to club meetings regularly.

In March 2014 thanks to a couple of donations and the generosity of members 64 items were collected. Besides tinned and dried food pet food and toiletries have been welcomed by the bank which will also take cleaning materials. several members now have standing orders to support the food bank directly.

If you wish to donate foodstuffs or support this worthwhile charity please use our contact page initially. 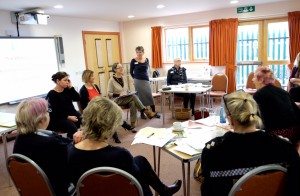 This was one of our exciting current projects. SIGBI compiled information on women’s imprisonment in England. We held an afternoon where front-line staff from a number of statutory and non-statutory agencies gave their time to discuss this issue. It was a very useful and interesting event. From this we compiled our own report which was sent to region where they placed it alongside reports from other clubs.

These went on to the Prison Reform Trust for collating before being presented to Parliament in September 2014. All attendees and interested parties were sent a copy of the final report after they were given time to place any extra thoughts into a draught report

BIRTHING IN THE GAMBIA (B.I.G PROJECT) 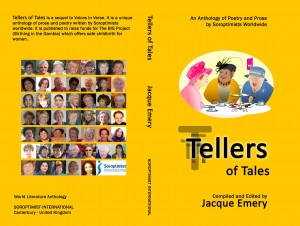 We raised funds for our SIGBI Federation Project, ‘Birthing in the Gambia’ by the innovation of our second publication. ‘TELLERS OF TALES’ is a collection of short stories in both prose and poetry that has been written by 48 Soroptimists’ from 14 countries and from all 4 Federations. Copies can be purchased by using our contact page.

Club members sold books at Region meetings and at the SIGBI Conference in Gateshead. In March, a copy was presented to Canterbury Library. £2,500 has so far been sent to the BIG Project from book sales.

Another fund raising event for this worthwhile project was the extremely successful BAGATHON which raised over £1,000 towards this project. 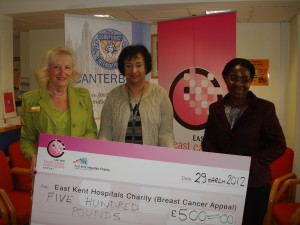 After working alongside East Kent Hospitals Mammography Unit fund-raising team, SI Canterbury realised the importance of early detection of breast cancer. As a result our club decided to take a proactive role using an on-line survey to understand whether women a) know how to examine their breasts. b) How often they examine them and whether they would like to be reminded to examine their breasts monthly (as recommended)  and if so c) which method they have a preference for.

SI Canterbury plans to continue this project by working with GP commissioners and other stakeholders to consider feasible ways of using reminder methods to encourage women to examine their breasts as recommended by Cancer Research UK.

To celebrate SIGBI’s 80th birthday and to reflect Regional President Jacque’s theme of ‘Communication’, a writing competition was held for girls in the South East of England. Clubs held their own area heats and winners were selected and presented with book tokens and certificates by SIGBI President Elect Jenny Vince at the Regional meeting on 14 June in Maidstone. 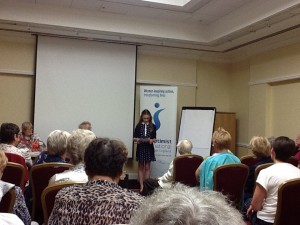 The girls were given  the choice of writing about three women who had influenced their lives – ‘Looking Back’ or imagining the next 80 years and what they might achieve.

There was an interesting selection of role models including writers, sportswomen and women driven by politics or their world at war. Some girls wrote about ‘ unsung’ heroines such as Guide leaders or family members.

SI Canterbury Club a friendship link with SI Bulawayo Club raised funds for a water project for a nutrition garden in Matabeleland region, Zimbabwe. Through one of our members two nutrition gardens were identified and SI Canterbury donated US$ 2,000.00 for rehabilitating the two boreholes.

The activity focused on three areas:

This activity was accessed through the Study circle programme run by Edward Ndlovu Memorial Trust in Gwanda. The goal of the programme it to promote sustainable development in rural areas of the Gwanda District through community projects based on creative problem solving using information resources and the group study circle methodology. The ENMT’s main objective is to support communities facing challenges in their various community activities/projects and also to promote a reading culture among pupils, teachers and the communities in Gwanda District. 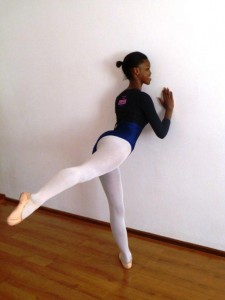