SID and the Joint Challenge Badge helps us to win the ‘Reach for the Skies’ Programme Action Award in the Northern Region – we are thrilled!

The Regional President described our projects as having the ‘Wow’ factor!  Well, we think they have – and we are really enjoying them!

One recent activity involved SID’s first sheared fleece, several members of S.I.Durham, the children at Evergreen School, a lot of warm water and some washing up liquid!  We had a felt-making session at the school in the summer term. The children very much enjoyed laying out the fleece, getting wet and soapy and creating beautifully soft felt which they can use to make pictures and cards. 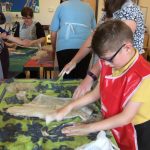 Four storysacks were sent out to the Shamah Center in September, these included 40 knitted alpacas, books and jigsaws. We have received donations of knitted alpacas from our members and friends including from many members of the Trefoil Guild both locally and further afield.We are so grateful to  everyone who has helped us.

Evergreen School’s first visit of the new school year to the alpaca farm is on October 10th.  We are also planning further visits to the school to continue with alpaca-related fun! 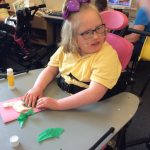 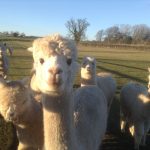 Our club adopted a baby alpaca born in July 2016 and he is now registered to us. He is called “SID” (Soroptimist International Durham).We are now involved in what we hope will be a long term project working with children in a school for multiple and complex needs, within County Durham, bringing them to the alpaca farm for an initial visit and then following up with a range of activities for the children and involvement of club members. These plans will include a number of visits, making storysacks,  S.I.members doing activities such as felting with the children in school and other activities which we hope will become viable as time goes on. We started working with the school, Evergreen Primary, in Bishop Auckland, in Spring Term 2017. After initial meetings, the class we are working with went for their first visit at the end of March. It was an extremely successful visit enjoyed by children, staff and S.I. members alike and as it was close to Easter, an egg hunt was planned in and each of the children had a chocolate egg to take home at the end of the day. The next visit was on 25th May when we had blue skies and a very warm day, so had to keep seeking shade and giving regular drinks to all. The children thoroughly enjoyed giving the alpacas a refreshing shower via a hosepipe and the alpacas enjoyed it too!! It was lovely to see that the majority of children remembered their previous visit, settled in very quickly and were enthusiastic about the different activities and challenges for the day

The owners of the alpaca farm, Carole and Clyde Burn, are very interested in the positive impact that the animals can have on children with special needs of any kind. Carole has done a lot of work in this area, particularly with emotional and behavioural needs, in the past, and is very experienced and qualified. She has written two story books so far, based on the actual animals in her care, specifically aimed at younger children and those with special needs. She will be closely involved as a partner in the project and is very enthusiastic as we are, about the potential.

We are also linking with a school for autistic children in Saudi Arabia, The Shamah Center, which has been set up by a former member of our club, Dr Madeleine Portwood, who is a specialist senior educational psychologist. A former headteacher of Timothy Hackworth Primary School in Shildon, also works at the school.

This project is still in very early stages of development but we are very excited about the potential and the difference it could make, as there is a great lack of knowledge and understanding by the children’s parents about autism and little educational provision. Madeleine was given a large number of Carole’s first book “Horace” to take out to Saudi in September 2016. It was agreed that these stories and the photographs of the actual alpacas, being of the same animal family as camels, would be something the children there could relate to and be an excellent introduction to a potential project. The book has now been translated into Arabic and we have received several photographs of the children and the school. The children and parents were very enthusiastic and loved the book, so we hope that the project will be a success. We are currently putting together storysacks to be taken out in the near future. It will be very interesting for a women’s organisation to be involved in the project within a male dominated society.

We have several members who are involved in various ways with the Girl Guiding Movement in County Durham.  During the last year we have developed a Joint Challenge Badge which girls from all sections of Girl Guiding can work towards, from Rainbows through to leaders and also members of S.I.Durham have taken part! The girls have taken part in all kinds of activities and also raised some money for President Judith’s chosen charities. On several occasions members of S.I.Durham have been invited along to the Rainbow, Brownie or Guide meetings to see the Challenge Badge in action. S.I.members have thoroughly enjoyed the visits they have made to units to see what’s going on and find out about Guiding at all levels, so please keep inviting us! 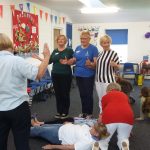 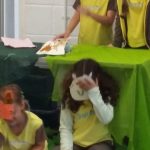 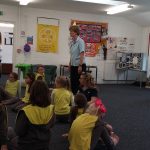 Last year members of SI Durham discussed issues of Citzenship and submitted a report to Parliament. This was in response to a Parliamentary Select Committee investigation into the issues of citizenship in the UK in the 21st Century. This work has been nominated as one of three possible Programme Action projects to receive an award at the Soroptimist International Great Britain and Ireland Federation Conference in Liverpool October 2018.

In July 2018 as part of the events to mark one hundred years since some women got the vote and 90 years since all women over 21 got the vote members of SI Durham visited Morpeth. In the cemetery in Morpeth is the grave of Emily Wilding Davison the suffragette who gave her life under the feet of the King’s horse in a public horse race  in 1913 to further the cause of women’s suffrage. President Dot Hales and some club members took flowers to lie on her grabve and publicised her work and sacrifice

of life in the. local media 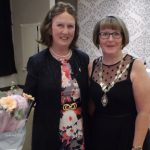 On Monday 1st October SI Durham held its annual Interclub event. Members, friends and representatives of other local women’s voluntary organisations attended Ramside Hall Hotel to hear Durham’s former High Sheriff speak about her work This included attending local Refuges supported by SI Durham. She visited alongside club members, who are the contact points across County Durham for those organisations. She learnt about the work of the Refuges and the support provided by club members including toiletry bags, soft furnishings, clothes, bedding and TV sets for those living in the Refuges.

We undertake local Programme Action activities linked with these groups in addition to other initiatives decided through our regular meetings, which may be on a yearly basis or a long term project agreed by the club members. This may include talks from representatives to ‘raise awareness’ of issues, local, national or international, lobbying M.P’s and other relevant bodies around the issues taken up by the club. An example is the support for the Education of Girls Women raised by the Malala movement to support girls around the world receiving education.  We can follow International issues through the Programme Action reporting links made possible by the General Consulatative Status held by Sorptomist International (SI) with the UN Economic and Social Council through a permanent SI Representative at all major UN Centres