Recently we have lost another of our long standing members who gave great service to her country, community and of course Soroptimist International. The following article appeared in the Scotsman paying tribute to her work.

The sudden death of our longest serving member, Dr Isabel Smith, has shocked all our members. COVID -19 has prevented us attending her funeral which was held in Ayrshire, but we were able to be represented by one member. 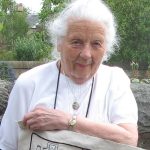 Isabel, as she was known, was born in Glasgow in 1929 and grew up in Ayr where she attended Ayr Grammar School and Ayr Academy. She studied at The University of Edinburgh from 1947-1953 where she obtained a BSc with honours in Bacteriology, followed by a PhD in 1953. In 1953 she obtained a post in Aberdeen as Demonstrator, and personal assistant in the Department of Bacteriology, University of Aberdeen.

Between 1956-1962 Isabel became a Scientific Officer (and latterly Senior Officer) at the Torry Marine Laboratory in Aberdeen where she worked on cancer in fish. In 1962 Isabel returned to Edinburgh, where she was appointed a lecturer in the Department of Bacteriology (later Medical Microbiology) in the faculty of Medicine at the University of Edinburgh. Her teaching, to medical and science students, was initially mostly on bacterial physiology, but very soon Isabel specialised in the developing field of medical virology, under Dr RHA Swain. Over 30 years, to her retirement in 1994, Isabel was promoted to Senior Lecturer, and played an important role for the health service in the work of the University Virus Diagnostic Laboratory.

Countless students at all levels benefited from the meticulous practical demonstration and supervision that characterised the laboratory work of that era, but Isabel was always more than a teacher. She cared about people and kept in touch with many long after they moved on.

Isabel was a skilled needlewoman, and she led a team of five club members who contributed to a panel on “votes for women”  for The Great Tapestry of Scotland. She had strong lifelong

commitment to Girlguiding and she organised a poster competition “Our World 2027” for the Rainbows, Brownies and Guides as part of SI Edinburgh’s celebrations for the 90th Anniversary of receiving its charter.

Isabel fully participated in all aspects of Soroptimist International at club and region level. She had a “can do” attitude to everything. Her memory and recall were exceptional. She gave wise counsel and knew who the best person in the club was for any task. Isabel participated in most club programme action activities. She did not seek the limelight. Over a number of years, she organised the club members to an evening of checking Christmas shoe boxes in her church hall for Blythswood Care.

Just in her last year Isabel selected and prepared the biographies for the nominations of SI Edinburgh for the SI Scotland South Region playing card project to commemorate the Centenary of Soroptimist International.

Isabel had a wide range of interests, and a huge network of friends. The church was important to her, and she volunteered at the General Assembly of the Church of Scotland each year and was involved with the Church of Scotland Guild and the World Day of Prayer. Art and music were also important to her. She could recite Robert Burns poems. She had a love and encyclopaedic knowledge of plants, which she happily shared with other people. She kept fit by walking.

Isabel lived a full life of service and faith, all with a ready cheerfulness.

Following the recent loss of one of our oldest Honorary Members we record the life and service of Betty Walls.

She attended Hutchesons’ School for Girls in Glasgow and gained her MA from Glasgow University.  After some time as a primary school teacher she moved to Edinburgh.  She bought a flat in Morningside Drive, her mother stayed with her and she worked for the Church of Scotland being particularly interested in overseas mission. This was a life-long commitment and Betty visited mission stations as part of her service.  She had stories about her time in Kenya and India.  One such was when having to sidestep along a thin ledge on a steep mountainside “Oh that was alright for me, but these two fellows with me, oh they found it difficult.”  That led her on to discussing the strength and fortitude of women.  In 1972 she became General Secretary of the Church’s Overseas Council – the first woman to hold the appointment, with responsibilities for, among other things, interchurch relations and visiting mission stations around the world.

At the same time, 1972, Betty was the first woman to be ordained as an Elder in Palmerston Place Church – six years after the General Assembly of the Kirk had voted to allow this.  Much of Betty’s service showed that women could and should be involved wherever and whenever their service was needed.

She joined Soroptimist International of Edinburgh in 1955, served as club secretary from 1960/62, as club President from 1968/9 and was made an Honorary member of the club.  Betty was a faithful member contributing to all club activities until very recently and was interested in members’ families and enjoyed opportunities to meet with the younger generation.

Socially, Betty enjoyed her visits to the Lyceum Theatre and Usher Hall with her dear cousin.  His companionship meant a lot and she missed this when he died about five years ago.  Also she was no mean water-colourist, an interest she had and was able to develop after retiring.  Her love of bridge was legendary.

Her funeral took place on 4th June – her love of life and her long life of service was celebrated.  Betty will be missed by her family, friends in Soroptimism, the church and the wider world.