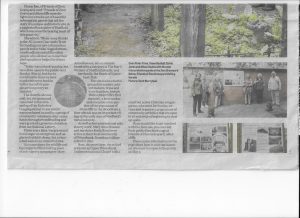 The Friends of Zion Graveyard in Attercliffe, Sheffield recently held an open afternoon for the launch of their new Interpretation Panels. The graveyard is all that remains of the burial grounds of the old Zion Congregational Chapel which was built in 1805 and demolished in 1862. The graveyard is the final resting place of important figures from the 1800’s and their stories provide a wonderful insight into the history of Sheffield in 1800.

There are eight interpretation panels, seven of which were funded by the JG Graves Charitable Trust. The eighth panel was sponsored by SI Hallamshire in memory of Rosemary Skerritt, a past president of the club. Monies from the Rosemary Skerritt legacy were used to fund the panel which provides information about Mary Anne Rawson, an anti-slavery campaigner and founder of the first Wincobank school.

The club also provided funds to purchase British native plants to be used in the restoration of the graveyard. These include knapweed, nettle leaved bellflower, winter aconite, cowslip and primrose.

We were delighted to be featured in an article in the Sheffield Star this week about the launch of the Interpretation panels.