Harrogate and District Soroptimists celebrated International Women’s Day at their Club meeting held at the White Hart on 6th March. Club Presidents Hilary Waddington and Elsie Johnston and Vice President Sandra Frier introduced three local women who have helped make a difference to women’s lives or helped highlight women’s achievements. Taking inspiration from Desert Island Discs each of our guests talked about their lives, what influenced them and their achievements. 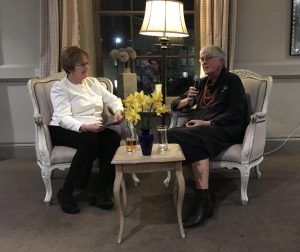 Anne Smyth OBE spoke about how her own and her mother’s experience of caring had made her aware of how little support there was for Carers – and how Carers are of all ages but still predominantly women. Anne set up the Carers’ Resource in Harrogate in the early 1990s. Anne’s hard work and diligence had seen it grow to an award winning charity providing support for carers and families across Harrogate District, Airedale and Bradford. Anne’s influence as deputy chair on the Parliamentary Standing Commission on Carers helped shape government policy on the important role carers have and; how it affects their heath and well-being .

Anne chose Schumann’s Kinderszenen Op.15, “Scenes from Childhood” and Dire Straights’s Money for Nothing. She chose Fresh flowers every week as her luxury item. 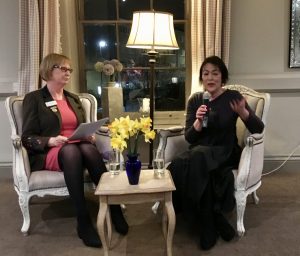 Our second castaway, Jane Sellars MBE trip to the National Gallery as a child inspired her into a career in art and its exhibition. It was not an easy journey; at the time in the late 70s it was a male dominated profession usually requiring an Oxbridge degree. She had to prove herself far more than her male counterparts did. In her long career she curated an exhibition and authored a book about ‘Women’s Works’ whilst at the Walker Gallery in Liverpool. She worked as the Director of the Bronte Museum in Haworth and Principle Curator at Harewood House. As Curator of Cultural Services for Harrogate Borough Council, Jane has been instrumental in the development of the Mercer Gallery in Harrogate. She is a published author. Her account of growing up in the 70’s, ‘Letters from my mother’ was broadcast on Radio 4 in 2004. Jane chose part of Mozart’s Adagio II from his Clarinet Concerto in memory of her family & Aretha Franklin’s, ‘Say a Little Prayer of You’ as her music choices.  Her luxury item –a Mac Red Lipstick.

Our final castaway, Club member Pat Shore MBE, began her career in nursing after a chance comment by an elderly gentleman at a bus stop in Bolton when she was 15. He told her she’d make a wonderful nurse. So she took his advise. Pat had a long career in nursing as well as giving voluntary service to many local projects including Lighting up Harrogate at Christmas. Her commitment to Soroptimist International is demonstrated through her willingness to take up office. She has been Club President twice, Yorkshire Regional President, Federation Councillor and the Federation Friendship Link Coordinator.  Her work as chair of the local Citizens Advice Bureau was the most challenging as demand increased but finances diminished. Pat’s chairmanship oversaw the building of purpose built offices and the merging of Ripon and Harrogate CABs. 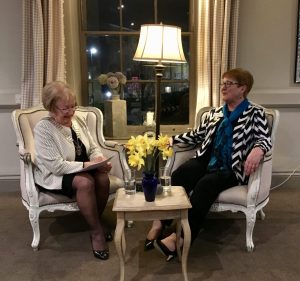 Pat, born in Singapore, whilst her father was in the RAF chose the Royal Air Force March Past played by the Central Band of the Royal Air Force. Pat served as the Chief Steward for the Soroptimist Federation Conference in Harrogate and chose it’s theme tune, ‘The World in Union’ by Haley Westerna.  Her luxury item was a comfy bed!

It was an excellent evening attended by members and guests including Yorkshire Regional President Pat Kilbane and Immediate Past President Chris Clark. 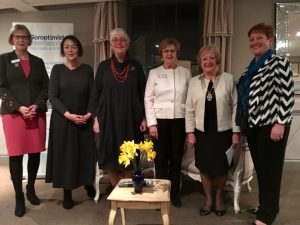 For more information about the Harrogate & District Soroptimists Club and how to become a member visit sihandd@hotmail.co.uk.

Meetings are held at The White Hart hotel on the first and third Wednesday at 7:30 pm