Seventy Soroptimists and guests Zoomed in from all over the Yorkshire, the UK and the World to celebrate the unveiling of a Harrogate Civic Society Plaque,  in recognition of Dr Kathleen Rutherford on International Women’s Day.  A woman, described as a legend in her own life time in a 1970’s Yorkshire Television Calendar News Special about her life, now all but forgotten. Dr Kathleen was a founder member and first Club President of Soroptimist International of Harrogate in 1933.  The Club was also delighted to welcome award winning journalist Nicky Harley, whose ‘Forgotten Women’ campaign kicked off our quest to find out more about our founder President. 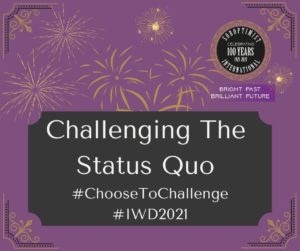 The Club always knew of Dr Kathleen but in 2019 Nicky contacted the Club as part of her  campaign to get more women recognised as part of the Blue Plaque scheme. In her research, and, in her opinion, Dr Kathleen was worthy of consideration for a Blue Plaque. Club member and archivist Rachel Richardson started her research that was to reveal so much more about Dr Kathleen.  Conversations began with local historian Malcolm Neesam and the Harrogate Civic Society.  We are pleased that the evidence provided  demonstrated that Dr Kathleen was indeed worthy of a Civic Society Brown Plaque. 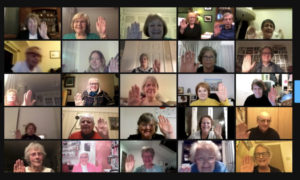 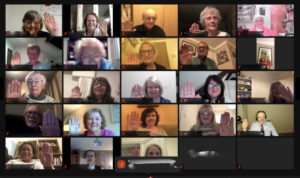 Dr Kathleen’s work touched many lives during her life and after. She was a Quaker and committed pacifist.  She was bold and wrote to Hitler about letting German Soroptimists attend an International Conference in the UK –  this resulted in her being invited to the 1938 Nuremberg Congress.  A grateful patient left a very sizable legacy that she used almost entirely for charitable purposes in the UK and abroad. Using her medical knowledge in countries as diverse as Naples Slums to Ugandan Leper treatment centres and humanitarian  and often heart breaking work during the Biafran famine in Nigeria.

Locally she was a supporter of Harry Styan’s Boys Club.  In 1970 she received the MBE from the Queen and made a Freeman of the Borough of Harrogate in 1973.  She died in 1975 aged 78.  She left the majority of her estate to charity. Listening to Dr Kathleen talk about her life in the showing of the original Yorkshire TV programme when Michael Partington interviewed her really confirmed what a wonderful and dynamic woman she was.

Unveiling of the Plaque

President Sandra Frier unveiled the Civic Society plaque on 1st March. It is now in place on the gate post of  Saint Mungo, 10 York Road, Harrogate courtesy of the house’s current owners Richard and Lynn Wriglesworth.   As President Sandra said about the plaque, ‘It is  a very appropriate way to recognise and remember a lady who was an impenitent idealist, internationalist and committed Quaker, who strove to make a difference through raising awareness, advocacy and action.”

We were delighted to be joined by Soroptimists from Yorkshire Clubs and our Friendship links from Paisely, Milford Haven, Middlesborough, Willimantic, USA and Pretoria-Tshwane, South Africa as well as Federation Friendship co-ordinatorBhaswati Biswas and Fedaration Director of PR and Marketing Nisha Ghosh from India

Our honoured speakers included the Deputy Mayor of Harrogate, Cllr Zoe Metcalfe, Soroptimist International  of Great Britain and Ireland (SIGBI) President Joanna Raffan, SI Yorkshire President  Linda Davis and SI President Elect Maureen Maguire.  All spoke about International Women’s Day, its history and the challenges facing women across the world. Many of whom have been adversely affected by the Covid Pandemic –  economically, socially and with regard to equality. We heard how Clubs in Yorkshire are responding to this challenge.

Hugo Wharton, Dr Kathleen’s great nephew who has proved a great help in Rachel’s research spoke of his Great Aunt and how he and his cousins used to stay with her as children.  He had very fond memories of her. Edward Kemp, Programme Director at RADA, also spoke about his  father Eric, the former Bishop of Chichester who Dr Kathleen treated in the 1920s  for shyness. Something the Bishop mentioned in his memoirs –  Shy, but not Retiring. Dr Kathleen, one of only a few women Doctors in the 1920s had an interest in psychotherapy.

Stuart Holland, Co-Chair of Harrogate Civic Society spoke about its work including the Heritage Trail  that provides a history of Harrogate through the Brown Plaques.

It was a very informative evening. A fantastic way to celebrate the life of a lady who really does deserve to be remembered and emulated.