All members of SI Haverfordwest have been extremely proud this year to have one of our own leading us at Regional Level.  One of our longstanding members, Heidi Lewis, has just completed an extremely successful year as President of SI Wales South.  Despite the extremely challenging times we have all faced as a result of Covid Heidi has led us cheerfully and extremely productively through the last 12 months.  She may not have been able to pay visits in person to the 16 Clubs in our Region but she has certainly made her mark – not only within Region but also much further afield.

Heidi’s theme has been “Making a Difference – Let’s Do It Together” and we have!!!  We’ve mastered Zoom, we’ve planted trees, we’ve supported our communities – locally, nationally and internationally – we really have had to think outside the box and Heidi has made sure we’ve done so with enthusiasm, commitment and fun.

Heidi’s year began back in October 2020 when she was installed as Regional President in the Change of Insignia Ceremony at our Annual International Conference in Belfast – although that was a virtual event with attendees from all over the world, little did we realised at the time that our virtual meetings would continue throughout Heidi’s term of office.  It certainly wasn’t the year Heidi would have imagained and planned for when she was first elected to move into the role of Regional President but never one to shy away from a challenge she has stepped up and completed her year with flying colours.

Heidi is now entering into a further year of shared Regional Presidency alongside Lesley Morgan of SI Abergavenny.  It might appear that Heidi will have  a year of doing “half a job” – nothing could be further from the truth!  Heidi has never been half-hearted about anything and it’s unlikely she would change her ways now.

Heidi and Lesley everyone at SI Haverfordwest wishes you both the very best for the forthcoming year – but don’t forget – last year’s President will be a hard act to follow!!! 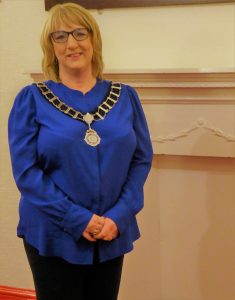