As the Llandudno conference, 29-30 October 2021, will be virtual, we said, ‘we will bring Llandudno to you’. In the following article Rhian Hand, of SI Llandudno, gives some interesting historical information about the town itself.

The Town of Llandudno 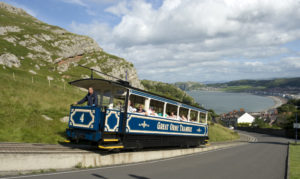 It was the dream of the late Dr Barbara Dixon, member of SI Anglesey, for the 2021 SIGBI conference to be held in Llandudno during what would have been her year as SIGBI President and she worked hard to achieve this goal. Sadly, Barbara passed away in October 2020 and due to the pandemic, a traditional style conference will not take place but Llandudno will still have an important role in hosting a virtual conference, with plans for transmission of key events from a studio in Venue Cymru, a large theatre complex on the promenade, where the conference was due to take place.  Previous Federation Conferences held in Llandudno last took place in 1955 and 1975 and both attracted considerable publicity in the local press. 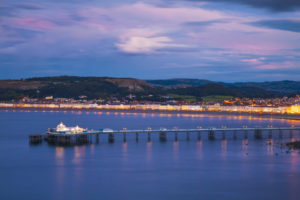 As the largest seaside resort in Wales, Llandudno is renowned for its wide promenade lined with hotels built in Victorian times on the North Shore, where the longest pier in Wales is also situated. As Llandudno stands on a peninsula, there are actually two shorelines, the second being West Shore, with views over to Conwy and Anglesey. Both coastlines are overlooked by the Great Orme headland which has many historic features including Bronze Age mines. The Orme summit can be reached by the only cable-hauled tramway in Britain, opened in 1902 or by cable car, the longest of its kind in the UK. In recent times, the Orme has been well known because of its famous residents, the Kashmir Goats. These normally live on the headland and can be seen from the town, balancing precariously on cliffs and ledges. When Llandudno was quiet and deserted due to the lockdown, the goats took the opportunity to venture into the town and help themselves to plants and hedgerows; this is now a regular occurrence. They made the national news and were an useful publicity tool for the local St David’s Hospice who produced goat themed merchandise to raise funds. 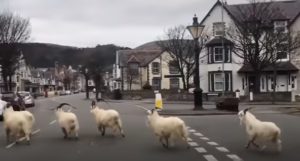 Llandudno is famous for its Alice in Wonderland connection. Alice Liddell, known as ‘the real Alice’, spent many summer holidays at her family’s holiday home on West Shore from 1861. The Liddells were close family friends with Charles Dodgson who wrote the books under the name of Lewis Carroll. It is speculated that Lewis Carroll visited the Liddells at their holiday home and was inspired by Alice and her adventures in Llandudno. There are several reminders of the connection in Llandudno with road names, statues, and a Wonderland town trail with its collection of wooden carved figures from the stories.

There is much history surrounding Llandudno including the first society for women’s suffrage being formed in The Cocoa House on the town’s Mostyn Street. The building was opened in 1883 as a Temperance Establishment where penny dinners were served to the poor. The Llandudno branch of the British Women’s Temperance Association met here and in 1907, local women formed the Llandudno branch of the National Union of Women’s Suffrage Societies. Its aim was to campaign peacefully for votes for women, members being law-abiding ‘suffragists’, not the more militant suffragettes. When the Soroptimist organisation arrived in Great Britain from USA it found a warm reception from the followers of Millicent Fawcett, campaigner for women’s rights. Millicent visited Llandudno in 1907, indicating that Llandudno was seen to be important in the struggle for women to get the vote. Millicent Fawcett was the first female figure to have a statue erected in Parliament Square.

Another historic place of interest is the childhood home of USA’s first female state senator, Martha Hughes Cannon, who was born in Llandudno in 1857 and emigrated with her family to USA in 1860. She campaigned for women to be allowed to vote in elections and in 1896 she won a seat on the Senate as a Democrat. During her two terms in the Senate, she helped to improve law relating to sanitation, female workers and disabled people. There is a bronze statue of Martha Hughes Cannon in Salt Lake City.

Last, but not of course least, is the Soroptimist club in Llandudno, SI Llandudno and District! They are an active, sociable club of 30+ members from the county of Conwy and meet in Llandudno. The President in 2018 managed to successfully campaign to have a plaque installed outside the former Cocoa House marking its historical significance and plans are in place to have a plaque outside Martha Hughes Cannon’s childhood home.