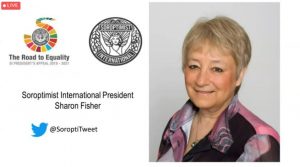 It was late at night and I was watching the closing moments of the SI 100 Years Event. It had been two days of continuous viewing, & I had become inattentive. Suddenly, I was startled to see our Host, lead the studio participants into singing the opening bars of ‘Dancing Queen’ by Abba. To my delight, I realized that President Sharon had donned a glittering feather boa. She also danced a few steps to join in the carnival-like mood there! In those fun-filled moments, I learnt that being a leader entails wearing several hats. And a big salute to President Sharon for wearing them so comfortably! Today I feel privileged to be writing about SI President’s Update on ‘The Road to Equality’ as she ends office shortly.

Sharon began her presentation with the 100th year celebration of SI with the events being held around the world. She reminisced that, when her term began in 2019 with the Road to Equality, she, along with everyone else had no idea about the difficult path she would have to tread shortly with the onset of the global pandemic. However, since then, we have all managed to jump into the virtual world, have adapted, are learning more, and meeting more people than ever before!

On a serious note, Covid 19 has impacted women in several ways. Girls are out of school, women are looking after children/teaching them, and earning a living, all from home. This has rendered them very vulnerable with concerns about their safety & welfare. Women and girls represent half the world’s population and therefore half the world’s potential. As such, they have a right to gender equality and the associated rights & opportunities. Only time will tell if there is a paradigm shift to gender equality and human rights, to which Soroptimists are committed.

We are experiencing climate disasters, conflict, and a global pandemic. To ensure the sustainability of our organization, we need to come together globally, locally as well as with others on these complex problems. We also need to voice our concerns globally. Since 1948, SI as an NGO, has been engaging with the UN structure with significant milestones.

SI President’s Road to Equality Appeal (RTE) which commenced in 2019, strategically focuses on taking action and advocating on topics affecting women and girls, including Child Marriage, Female Genital Mutilation, Domestic Violence, Rights of Older Women, Migration, and Human Trafficking. During the pandemic, the RTEA continued with learning opportunities, fund raising and projects which were not at risk of cancellation. During the period, 10 webinars have been hosted, as well as a series of podcasts as well as 2 AGMs, all of which have been well received. The President’s Appeal Committee team is led by Ayushi Kundu from India & her fellow coordinator, Olga Sidenko from Switzerland. Details of Projects are given below.

As a Soroptimist, Sharon values 3 things greatly. Firstly, SI has an opportunity to influence global policy, as it has 22 UN representatives on several committees. Secondly, there is global impact through our project work and lastly, we have international goodwill. These are the tangible benefits of membership of our global organization.

Sharon’s relevant last point was that while it was the very important for SI to carry out meaningful projects in helping women & girls overcome adversities, it was equally important to help the beneficiaries become advocates themselves and find their way to leadership and decision-making circles.

Before concluding, Sharon wished President Elect Maureen Maguire all success in her term as President which will commence from January 2022.

President Sharon ended with a profound quote from Mother Teresa -‘I alone cannot change the world, but I can cast a stone across the waters to create many ripples.’ She hoped that the ‘Global Voice’ of the Soroptimist would tell many stories and create many ripples!

We hope so too, Sharon!