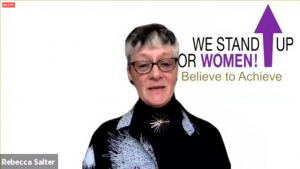 Rebecca Salter’s talk at the Soroptimists Conference, was interesting titled ‘Drawing in/on Isolation’. Drawing for her is an internal process where every line drawn can make or break the work in hand. To quote Rebecca, “The act of drawing is at the heart of everything I do. It is the most intimate of processes, encouraging you to explore and take risks, and at its best reveals both the hand and the mind of the artist to the viewer”.

Meet Rebecca Salter, the President of the Royal Academy in London. That is no mean feat as she literally stormed the male bastion being the first woman at that prestigious position of the exclusive institution that has a 250 years old history. As a painter ceramist and a print maker she had made a mark. First as the Academician in 2014, she moved on to become a Keeper in 2017 and then in 2019 was elected President. What makes Royal Academy special? She calls it, “a home for creative thinking”.

Three months into the job, Rebecca was faced with the pandemic. The shock of isolation for eighteen months due to the pandemic was acute. As Rebecca say, “No one was trained for this”. On reflection she avers that isolation for her has been a constant companion and it was during those periods, she has time and again learnt evolved her strength as a person and as an artist.

The 6 years in Japan gave Rebecca the opportunity to be confronted with isolation, -a different kind of isolation. The isolation of being unable to communicate in any form as no one spoke English. The profound isolation that led her to look at the world with different eyes. The cultural isolation gave her time to reflect on questions of western contemporary art world as being unaware of the contemporary art world of non-western countries.  In that isolation Rebecca says, “I began to see my own native culture through the eyes of my experience”. The evolvement of Rebecca’s persona and the nature of work, through the Japanese period of isolation stayed with her.

In 2003, Rebecca had an artist in residence stint at Josef and Anni Albers Foundation, Connecticut. An impressive offer which could not decline, but on arrival she found herself in rural Connecticut surround by forest and lakes. The isolation gradually took on an exhilaration, and in her words, “I felt liberated and drawing became the rock on which I built my solitude.” The artist is of the opinion that during isolation, fascination and complexity is found in the familiar. She says profoundly, “I have made physical isolation my own, I believe you can adapt and make anywhere your studio”. And so, the creativity is reinforced.

How does this resonate with Soroptimists? Important lessons learnt as isolation has been a huge dampener during pandemic times for most people, and many who live alone. Yet many as Rebecca did, found time to revisit hobbies, redoing -half-done projects and much else-creativity that often gets lost in the busyness of life.

In her talk the artist related  her tryst with learning the difficult Japanese writing- which is in pictograms. Resorting to traditional ink, brush and paper was a different experience. She learnt that timing of the brush on paper was utterly important. The almost meditative process of writing reveals the relationship between ink and paper. In Japan she was found at the intersection between Western and Japanese traditions, her practice seeks to bridge a gap between two fundamentally different conceptions of art.

To gain familiarity of her work I viewed some of her work, virtually of course and understood her talk a tad more intensely. I quote a critic review, “The layering of neutral tones often suffuses the work, offering a tranquil, yet spellbinding, response to nature. The use of vertical and horizontal planes structures the work: one is invited to draw from the abstractions a sense of landscape and depth.”  Rebecca herself feels that, “The idea of ‘empty’ space not being ‘empty’ but full of potential is very compelling.”

She compared the repetitive element of her drawings with needlework or embroidery (Soroptimist needlewomen you are on the right track!) The intimacy of engagement in a quietly repetitive activity – almost as if you can disappear in it and find your calm. Profound hmmm. 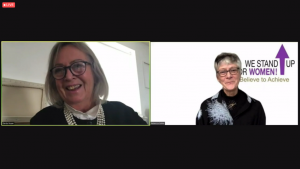 At the Academy Rebecca mentors fifty or so young artists- she finds this very rewarding- the Academy is trying to build and give space to future generations. She calls it intergenerational generosity.

As a young person herself Rebecca was told that she couldn’t go to art school, as it wasn’t the right choice of career- and that she would never make it as an artist! How wrong that assessment was. Her advice to parents is -that there are different forms of intelligence – to explore why the child wants to do a different thing. Let them do it let them flourish. Rebecca recalls the sense of liberation she experienced when she finally when to art school and knew draw/paint all day every day.

Wasn’t this late President Johanna Raffan’s focus too, the gifted special children that need to be discovered and nurtured as the believe to achieve. In a tribute, Rebecca dedicated her talk to her late friend.

Thank you, Rebecca Salter, you have shown us the circle of isolation-so we may find our own special spaces beyond the restrictive horizons..

Rebecca Salter is first female President of the Royal Academy of Arts in London since the Academy was founded in 1768.

She studied at Bristol Polytechnic and then at Kyoto City University of the Arts in Japan, where she lived for six years. While living in Kyoto, Salter studied traditional Japanese woodblock printing and has since written two books on the subject. Her interest in printmaking is combined with her main practice in painting.

Salter had a major retrospective into the light of things at the Yale Center for British Art, New Haven, Connecticut in 2011. She has also been artist in residence twice (2003 and 2011) at the Josef and Anni Albers Foundation, Connecticut. In addition, she has undertaken several architectural commissions including 15 Sackville Street, London W1, and St George’s Hospital in Tooting. She has work in many private and public collections including Tate, British Museum, Yale Center for British Art and Yale University Art Gallery.

Once told ‘You’ll never get into Art School’, Rebecca epitomises our Conference theme, ‘Believe to Achieve’.  She now says ‘Do not tell young people they can’t do things’.