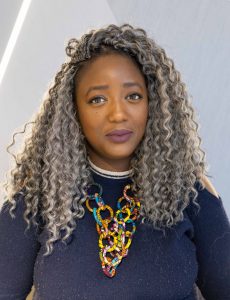 At the age of 11 Dr Anne-Marie passed her Computing A-Level.  By 20 she was one of the youngest ever to receive a Masters Degree in Mathematics and Computer Science from the University of Oxford.

Today she is a keynote speaker, presenter and co-founder of the award-winning social enterprise, Stemettes.

A recognised and respected thought-leader in the tech space and trustee at the Institute for the Future of Work, Anne-Marie has spoken across the globe for some of the world’s biggest digital companies and conferences, including Facebook, ASOS, Google, SXSW and Founders Forum.

She regularly appears in international media and is a sought-after presenter and conference facilitator. In addition to hosting the highly popular Women Tech Charge podcast for the Evening Standard, Anne-Marie featured on the 2019 Royal Institute Christmas Lectures and has conducted live interviews with famous faces from the tech world and beyond, including Jack Dorsey, Rachel Riley and Lewis Hamilton.

Voted the most influential woman in tech in the UK of 2020 by Computer Weekly and featured among the top 10 BAME leaders in tech by the Financial Times and Inclusive Boards, Anne-Marie was also the recipient of the prestigious Barclays UK ‘Woman of the Year’ award in 2018.

In recognition of her significant influence and achievements, Anne-Marie was awarded an MBE in the 2017 New Year’s Honours for services to young women and STEM sectors. In June of the same year she was also made an Honorary Fellow at Keble College, Oxford. 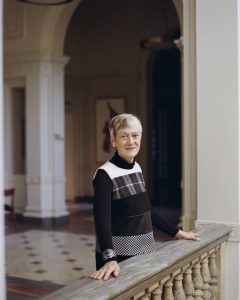 Rebecca Salter is first female President of the Royal Academy of Arts in London since the Academy was founded in 1768.

She studied at Bristol Polytechnic and then at Kyoto City University of the Arts in Japan, where she lived for six years. While living in Kyoto, Salter studied traditional Japanese woodblock printing and has since written two books on the subject. Her interest in printmaking is combined with her main practice in painting.

Salter had a major retrospective into the light of things at the Yale Center for British Art, New Haven, Connecticut in 2011. She has also been artist in residence twice (2003 and 2011) at the Josef and Anni Albers Foundation, Connecticut. In addition, she has undertaken several architectural commissions including 15 Sackville Street, London W1, and St George’s Hospital in Tooting. She has work in many private and public collections including Tate, British Museum, Yale Center for British Art and Yale University Art Gallery.

Once told ‘You’ll never get into Art School’, Rebecca epitomises our Conference theme, ‘Believe to Achieve’.  She now says ‘Do not tell young people they can’t do things’. 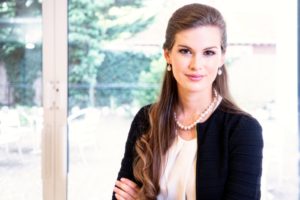 Carina recently featured on the front page of The Times – talking about her work leading on COVID-19 antibody detection, COVID-19 management in intensive care, and identifying COVID-19 vaccine and therapeutic trials with Oxford University.

She has worked with local and national government and international organisations including the World Health Organization, where she authored international policy documents and published work on emerging respiratory viruses. As advisor to healthcare-focused venture capital firms and an ex-founder, Carina’s work is driving the translation of technology into healthcare systems and the use of digital health technologies.

Carina graduated from Cambridge University with a First Class Degree in Medicine and a Master of Public Health with Distinction.

She has appeared on BBC News, ITV News, Sky News, Radio 4, and has been featured in The Times, Daily Telegraph, and Business Insider. 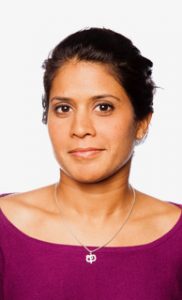 She is also an Adjunct Research Fellow at the Oceans Institute of the University of Western Australia. She has degrees from the University of St. Andrews, University of Oxford and the University of Western Australia but escaped academia to establish her own Sri Lankan grown non-profit, Oceanswell – Sri Lanka’s first marine conservation research and education organization. Her work has been showcased internationally by the BBC, the New York Times, TED and National Geographic to name a few. Asha is the first and only Sri Lankan to have a PhD in Marine Mammal research, the first Pew Fellow in Marine Conservation and first National Geographic Explorer from Sri Lanka, and the first Sri Lankan woman to have her portrait hung at Oxford University. Asha is also a TED Senior fellow, an Ocean Conservation Fellow at the New England Aquarium, a Duke Global Fellow in Marine Conservation, and a World Economic Forum Young Global Leader. In 2018 Asha won the WingsWorldQuest Woman of Discovery at Sea award, was a finalist of the Pritzker Environmental Genius Awards, a global winner for the UK Alumni Awards in the Professional Achievement category that recognizes alumni whose work has created change in their chosen profession, awarded the Woman in Management Inspirational Woman of the Year Award, Ada Derana Sri Lankan of the Year Emerging Global Scientist Award, named one of Asia’s sustainability superwomen, listed on the BBC 100 Women 2018 list of most inspiring and influential women from around the world and named Lanka Monthly Digest’s Sri Lankan of the Year.

In 2019 Asha was named one of 12 Women Changemakers by the Parliament of Sri Lanka and won the inspirational icon awards at the 21st Century icon awards in London.

In 2020, she was named a HCL Technologies Global Goodwill Champion at the World Economic Forum’s annual meeting in Davos, was awarded a Maxwell-Hanrahan Award in Field Biology and named a Scubadiving magazine and Seiko watches of America Sea Hero for November 2020.

In 2021 Asha was awarded a Vanithaabimani lifetime achievement award for her outstanding achievements in her field and for bringing pride to her island nation.