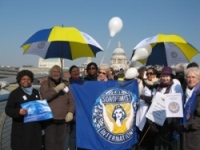 You will be thrilled to hear that Soroptimists from London Chilterns, South East and Southern Regions joined in the march on the Millennium Bridge on Tuesday 8 March. It took one and a half hours but the circuit was held in bright sunshine and there was plenty to feel proud about. Arriving at the Festival Hall on South Bank, after crossing the Hungerford Bridge, there were rallying speeches from Annie Lennox, Bianca Jagger, Lynne Featherstone (Equalities Minister) and our own Federation President Liz Morgan-Lewis, and also some stirring words from the great grand-daughter of Emmeline Pankhurst.

After the speeches, we went back to our stand where were able to speak with interested parties along with other participants such as Care international and Women for Women International.  For once we had been given a great introduction by the organisers and the word Soroptimist was used several times and re-asserted by Liz, so we had an opportunity to make more of ourselves. SIGBI President Liz says ‘International Women’s Day is very special for us, this year’s message of peace and equality are vital if we are to transform the lives of women and girls in the future. This has been a wonderful day standing shoulder to shoulder with women around the world to celebrate the 100th Anniversary of International Women’s Day’.

There were many other Bridge events around the world, in total over 400, of which 45 were organised by Soroptimist Clubs. The bridge symbolises building bridges of peace around the world. We were told that 100 women had stood on a bridge in Kabul to celebrate, whilst two bombs had exploded around them. They had stayed long enough to make their point. If they can do this, it is up to us to make our voices heard too.