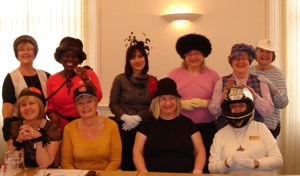 On Saturday 5 February 2011 we held the Incoming President Workshop which included Elects, Vice and was hosted by Region President Johanna Raffan and led by Teams of Excellence trainer Eileen Shaw, both from SI Thames Valley. We were also joined by members of the Exec Committee.

The Region holds this event every year and helps to introduce the new presidents to the Committee and to understand how the Region moves forward within the SIGBI Federation. After the introductions it was clear that we had a mix of recycled Presidents, members of longstanding who finally wanted to take office, and those newer members, who wanted to make an early start in club life.

Given this range, it is clear that these personalities are within every Club, and one of the fundamental messages from every President should be to recognise the differences within her club. It is important to recognise strengths, encourage the less committed, and to curb over enthusiasm where it prevents others taking part. The exercises we did during the morning were therefore meant to help recognise and make these characteristics work to the benefit of the club.

Eileen has a marvellous way of introducing characters and uses them as role play. She has a set of Smurfs, each of which represents a different character – it’s a bit of fun but works well. Each person has to describe what she thinks the character would bring to the club, and there are often two sides. It gives us an opportunity to take a step back and evaluate each person and her attributes.

It is also an opportunity to discuss Federation expectations and strategies and how they can be implemented at club level. Clubs have different personalities so may prefer to select certain elements within Federation plans which they feel their club can achieve with the members they have. We discussed how meetings are held, content, venue and how often they are held.

The finale was a fond look back to how things were, and also made us think about who we were. We were asked to bring a hat, a retro look to how one dressed up for meetings complete with gloves, in earlier years. We each matched the gloves and hats and it was interesting to see the change of formality and also gave us the opportunity to be a different person, associated with that hat!

After which, in true Soroptimist style, we went to the local pub for lunch………………….