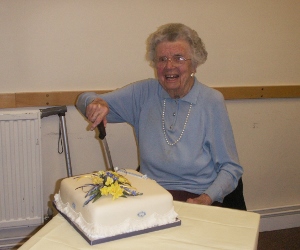 It is with sadness that we have to announce the death of our friend and fellow Soroptimist Eileen Alexander. A Soroptimist for 62 years she held a number of offices. Eileen was a Regional President, Club President (Bedford) , member of Federation Executive and a very active Federation Friendship Link Co-ordinator.

Eileen trained at Dartford College and taught in two schools before she was appointed Lecturer at Homerton College Cambridge.

During World War 2 She was seconded into the ATS in 1941 for War Service in Anti-Aircraft Command organising physical activity for ATS manning searchlights and for NCOs.

On her release she returned to Homerton but in 1946 became Inspector of Schools. In1951 she was appointed Principal of Bedford College of Physical Education and retired in 1971, when she was awarded the OBE and in 1995 she was awarded an Honorary Doctorate of Education by De Montfort University.

Other appointments include:- 1959-61 President of the Physical Education Association of Great Britain and Northern Ireland; 1977-1985 Member of the Sports Council; 1953-1991 Member of the CCPR Executive Committee and Chair of the Movement and Dance Division; UK Representative on the Council of the International Association of PE and Sport for Girls and Women from 1965-1977; 1997 PEAUK Ling Award for Services to the Association and the profession.

Eileen was a pioneer, educator, a skilful businesswoman and a philanthropist and led a full and active life.