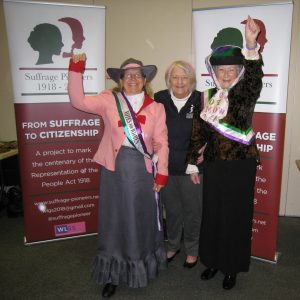 Soroptimist International of Slough, Windsor & Maidenhead, Thames Valley and High Wycombe and District Clubs hosted an event in Maidenhead to mark International Women’s Day and the centenary of votes for (some) women in the UK.

The British Prime Minister, and MP for Maidenhead, Theresa May sent a letter which started  “I am delighted to send my best wishes to everyone celebrating International Women’s Day in Maidenhead, and to thank the local Soroptimist International Clubs for everything you are doing to support women across the area. For the full letter please download here: TheresaMaysletterIWD2018

The theme was: “What Have We Achieved?”

The event was a great success with 70 attendees from a number of local women’s organisations, even though it was Mother’s Day. Soroptimists were there from Newbury, Oxford, Greater London and Tiverton in Devon as well as from the organising Clubs. We also had two Mayors and two Mayoresses in attendance, including Margaret Lenton who chaired the event. Pictured above, dressed as on the day are Jen Simpson from SI High Wycombe and District, Jackie Paling from SI Slough, Windsor and Maidenhead and Irene Cockroft (also in the promotional picture). Irene was a keynote speaker – please see the notes below. It was great to see Jen and Irene in the costumes for Women’s suffrage 100 years ago. 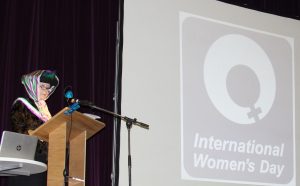 “Irene Cockroft , a member of Soroptimist International Greater London, London Chilterns Region since 1997, is an independent exhibition curator, author and lecturer specialising in the history of women’s involvement in the late 19th, early 20th century Arts & Crafts and Suffrage movements.

Irene’s inspiration in studying women’s history was her great-aunt, suffrage artist Ernestine Mills (1871-1959) who worked in many mediums including highly-skilled enamel-on-metal. Mills was a founder member of Soroptimist International of Greater London, chartered in 1924. 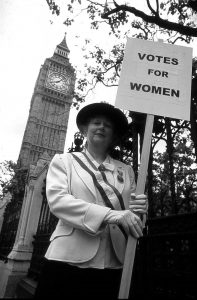 Ernestine’s medical doctor husband Herbert Mills, was physician to the militant Pankhurst family and to Lady Frances Balfour, leader of the London Suffrage Society that sought to achieve Votes for Women through peaceful advocacy. Ernestine was a member of both the militant and the law-abiding societies, the leaders of which were family friends.

Irene’s book, New Dawn Women, published by Watts Gallery, illustrates the link between Arts & Crafts training for women and propaganda for women’s human rights. Another book, co-authored by Irene with Susan Croft and published by Aurora Metro Press, covers Art, Theatre and Women’s Suffrage.  Both books are available on the Amazon website.

For a Soroptimist discount whilst stocks last, please email: newdawnbooks@virginmedia.com.

During the summer of 2018 (May-August/September), as part of Parliament’s Vote 100 programme, Irene Cockroft and Susan Croft have been commissioned to guest-curate an exhibition which celebrates the centenary of Votes for (some) Women, Suffragettes in Camden. www.thesuffragettes.org The venue will be Camden Local Studies and Archives Centre, 32-38 Theobalds Road, London WC1X 8PA, not far from Holborn Tube Station. “
IWD talk CV © V.I.C. 20171208