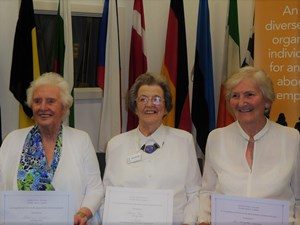 (NAWO) at a gathering in Europe House, London. Zarin Hainsworth OBE, Chair of NAWO, introduced the Elder Awards, which were set up to celebrate the work of feminists who are over 80, are still heavily involved in the women’s movement, and who by their work have inspired others.

Hilary Page, a long-time Member of SI Lewisham in London Chilterns Region and Past-President of her Club and her Region (now a member of SI Epsom), was nominated for her many years of service to Soroptimist International at every level including SI Great Britain and Ireland Federation President and Soroptimist International President. The award recognised her work promoting the equal role of women in society including establishing Gender Action for Peace and Security (GAPS)  GAPS was founded to progress the United Nations Security Council Resolution 1325 on Women, Peace and Security. The three winners left to right are Audrey Forster, Hilary Page and Annette Lawson. 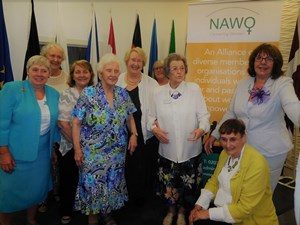 A number of Soroptimists were in attendance to see them receive their awards and to congratulate them on their achievement including Wendi Momen and Jenny Vince from SI London Chilterns Region.