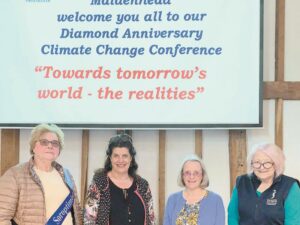 SI Slough Windsor and Maidenhead celebrated its Diamond Anniversary by holding a Climate Change Conference in the Long Barn at Norden Farm, Maidenhead on Saturday 26 March and having a celebratory lunch at Ditton Manor, Langley on Sunday 27 March.The theme of their Climate Change Conference was ”Towards Tomorrow’s World – the Realities?” For this they had some very inspiring speakers. Cllr. Donna Stimson, who attended COP26 on behalf of the Royal Borough, spoke about what she took away from it and what we all could do. SI St Albans member Linda Shall talked about building her Passive house – the concept of this type of house is based on a voluntary standard for energy efficiency in a building which reduces the building’s ecological footprint. It results in ultra-low energy buildings that require little energy for space heating or cooling. The third speaker, Internationally reknown Professor Amir Sharif, Dean of the Faculty of Management, Law and Social Sciences and Professor of Circular Economy at Bradford University, sent a video of his presentation where he spoke about the different types of economy and how the circular type helps us to reduce, re-use, and recycle.

On Sunday 27 March, a celebration lunch was held in the library of the beautiful setting of Ditton Manor, Langley, near Slough www.sigbi.org/slough-windsor-and-maidenhead/2022/03/29/diamond-anniversary-weekend

The Guest speaker was Tan Ikram CBE, who is Deputy Senior District Judge (Deputy Chief Magistrate) for England and Wales. He gave a very good speech on topics of importance to Soroptimists e.g. violence against women, forced marriage, and trafficking. He mentioned the Victims Commissioner and was unaware that she was a Soroptimist. He was soon put right! A cake in the shape of a book on the 60 year history of the Club and a sugar posy of roses was made by Jackie Paling. Pictures on the front of the book were taken from drawings by a now deceased past member who was very artistic. A raffle raised over £300 towards the SI President’s Appeal “Opening Doors to a Bright Future” and also the aid effort for Ukraine.” Soroptimist International President Maureen Maguire was unable to attend due to COVID-19 and her address was delivered by Associate Member and past Regional President Alison Sutherland.

Please see the photos below – CONGRATULATIONS – what sparkling way to celebrate a diamond anniversary! 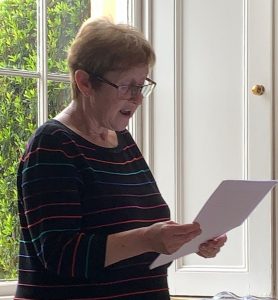 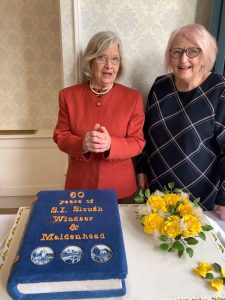 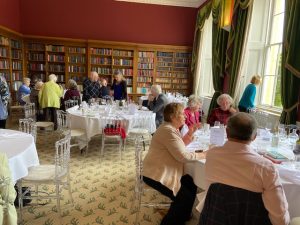 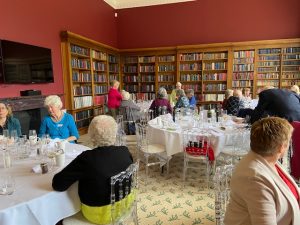 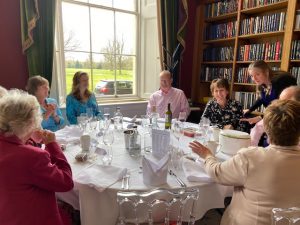 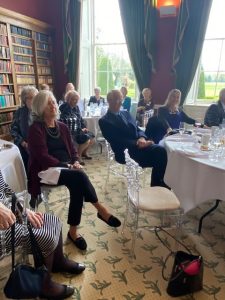 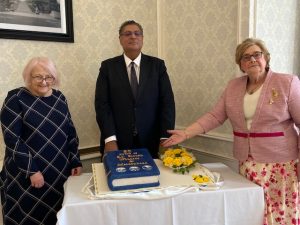 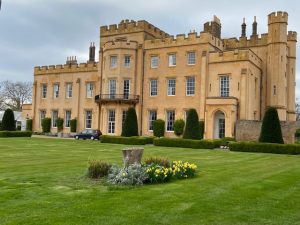