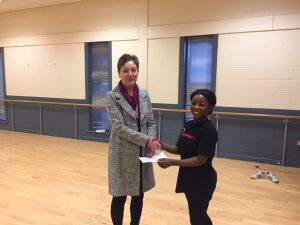 The Manchester Arena terrorist attack last year was both horrific and shocking. Our club received many messages of support both from this country and from round the world, sending sympathy to the victims and to the people of Manchester.

Members wanted to do something in memory of the victims and, after much discussion, we decided it would be appropriate to help a girl who wanted a career in performing arts. Pendleton College, a sixth form college well known for teaching performing arts, was approached and it was decided that the award of £250 would go to a girl, chosen by the college, who would benefit from a  monetary award to help with her audition costs. We have committed to five years but hope to extend it.

President Rose and President Elect Barbara were delighted to present the first award to Kira McPherson. Kira is a dancer and has already auditioned for several dancing colleges, including the Liverpool Institute for Performing Arts. Kira’s class performed a short piece and Rose and Barbara have been invited back to future events.